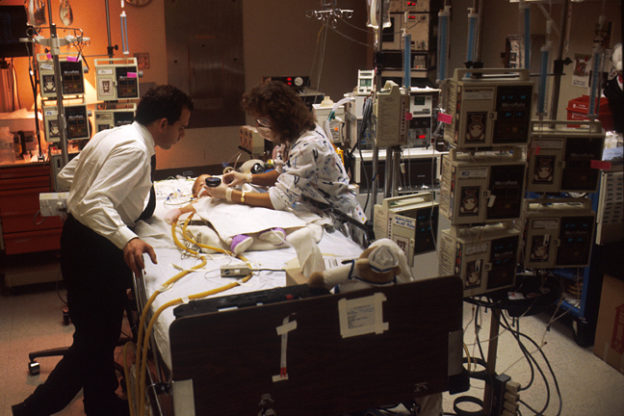 Image: “A doctor and a nurse treating a child in an Intensive Care Unit (ICU). ” by National Cancer Institute. License: Public Domain

Polycystic kidney disease can be diagnosed in adults and pediatric patients. It is an inherited disease that involves bilateral renal cysts without dysplasia. The condition is divided into 2 forms:

The autosomal dominant pattern occurs in adults and is the fourth common cause of renal failure in the world. It mainly affects the kidneys, heart, brain, reproductive organs, vascular smooth muscle, and small intestine.

Autosomal recessive pattern, on the other hand, affects children from perinatal age until adolescence. It affects mainly the kidneys, lungs, and liver and rarely other organs like the brain.

Both forms of polycystic kidney disease affect all racial and ethnic groups and both equally affect males and females.

Autosomal dominant polycystic kidney disease is the most common inherited kidney disease in humans. It is a multi-system disorder characterized by progressive cystic dilatation of both kidneys with variable extrarenal manifestations in the gastrointestinal (GI) tract, cardiovascular system, reproductive organs, and brain.

In ARPKD, a mutation occurs on a very large gene called polycystic kidney and hepatic disease 1 gene (PKHD 1 gene). This gene is located on chromosome 6p21 which encodes a 447-kD protein called fibrocystin or polyductin. Polyductin is found to be present in the cortical and medullary collecting ducts and the thick ascending limb of the kidney, and the epithelial cells of the bile ducts. This explains varying degrees of hepatic and renal involvement.

Cyst formation is found in both ADPKD and ARPKD. Fibrocystin is responsible for the normal functioning of cilia in kidney collecting tubules; thus, any defect in this protein causes disruption in functions of renal cilia leading to cyst formation.

Genotype and phenotype correlation has been found in studies in patients with ARPKD. Truncation mutations have more severe morbidity and mortality than children born with missense or substitution mutations. Genotype testing is explained later in the diagnosis.

ARPKD affects mainly the kidneys and liver. Secondary involvement of other organs such as the lungs and lower extremity deformity is also seen.

Kidneys: Macroscopically, both kidneys are enlarged with the cyst formation of the collecting ducts visible as pinpoint dots on the capsular surface of the kidney. Microscopically, these cysts are around 2–3 mm in size. Marked collecting duct ectasia and interstitial edema lead to a decrease in the number of glomeruli and tubular structures. The pelvic calyceal system and renal vessels are not affected.

The severity of the disease is directly proportional to the number of nephrons affected by the cyst. If the neonate survives and grows to the infantile stage, cysts grow larger (up to 1 cm in size) and interstitial inflammation and fibrosis occurs, which is similar to patients presenting with ADPKD.

Liver: The classic lesion in the liver is portal fibrosis which surrounds an increased number of hyperplastic and ectatic biliary ducts. Hepatocellular histology remains normal. Intrahepatic biliary ectasia results in the dilatation of the extrahepatic bile duct with macrocyst formation leading to an enlarged gall bladder or choledochal cysts. There is a variable degree of liver involvement in ARPKD. Severe cases manifest over time with hepatomegaly and portal hypertension present in most cases.

Classic presentation in prenatal age is found through abdominal ultrasound. It shows bilaterally enlarged kidneys, oligohydramnios, and the absence of fluid in the fetal bladder. Additionally, an elevation of alpha-fetoprotein in the maternal serum and meconium in the amniotic fluid may be found. Respiratory distress occurs as a sequel. If intervention is started early and aggressively, urine output improves with improvement in respiratory status which, in turn, improves renal function.

Those infants who survive the neonatal and infantile phase have stable GFR but can develop complications in late childhood around the age of 15. It may lead to renal insufficiency which manifests as a failure to thrive, renal osteodystrophy, anemia, polyuria, polydipsia, hyponatremia, and metabolic acidosis. Concentrating defect in the kidneys is typical in these cases. Death from renal insufficiency is not common.

Hypertension is a very common presentation in neonates, infants, and children. It is found that hypertension is more severe in the first year of life and, if not managed aggressively, it can lead to cardiac hypertrophy and congestive cardiac failure. Hypertension can be responsible for the majority of deaths at an early age.

Liver disease: Manifestations of liver disease in ARPKD are evident in the form of the biliary disease and portal hypertension. These are seen in older children.
Portal hypertension is characterized by bleeding esophageal varices, hepatosplenomegaly along with hypersplenism picture of anemia, leukopenia, and thrombocytopenia in blood work. Liver function tests show normal results. The biliary disease presents itself in the form of choledochal cysts. Complicated/severe cases present with cholangitis or cholelithiasis which leads to sepsis. If prenatal transplantation is performed, hepatic complications dominate the clinical presentation of ARPKD.

Kidney: USG findings in ARPKD can be found as early as at 24 weeks of gestation in the prenatal 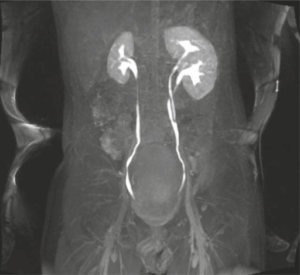 period. Characteristic findings include bilaterally enlarged kidneys, oligohydramnios, and the absence of urine in the bladder, although false positive and false negative tests have been reported. Maternal alpha-fetoprotein may be elevated. Post-natal ultrasound shows bilaterally enlarged kidneys which are diffusely echogenic with poor corticomedullary differentiation.
The presence of the hypoechoic subcapsular rim of parenchyma is very specific in these cases. Macrocysts are seen but are less than 2 cm in diameter. The kidneys in ARPKD decrease in size as the infant grows. This is the main differentiating feature from autosomal dominant polycystic kidney disease where kidneys enlarge in size with age.

Liver: USG shows massive hepatosplenomegaly with the hyperechoic liver. There is dilatation of the peripheral intrahepatic ducts and the main bile ducts. Choledochal cysts are found in some cases, but hepatic cysts are not commonly seen.

CT/MRI scans are performed to aid the diagnosis of ARPKD in case USG findings are equivocal. Magnetic resonance imaging (MRI) shows enlarged kidneys with microcytic dilatation of collecting ducts which are filled with water. MRI of the liver also shows characteristic findings of bile duct ectasia and portal vein fibrosis. The CT scan shows enlarged kidneys with radial or linear opacification in the cortex and the medulla.

Molecular genetic testing is done only when the diagnosis remains unclear, in assisting prenatal diagnosis and for genetic counseling to identify carriers of mutations of the PKHD1 gene. Genetic testing includes the following tests:

Currently, treatment is only supportive.

Neonates who present with respiratory distress require mechanical ventilation.
Management of patients suffering from ARPKD not only involves the patient but the whole family. Psychosocial support by social workers and psychologists play a vital role in improving their prognosis.

Survival rates of children suffering from ARPKD are increasing with the advent of neonatal intensive care and artificial ventilation. Complicated cases require bilateral nephrectomy along with peritoneal dialysis to allow optimal ventilation.

Poor feeding is common in infants with ARPKD due to gastric compression by enlarged kidneys. The infants may require supplemental nasogastric feeding to prevent growth impairment due to poor nutrition.

Sodium bicarbonate is given to curb metabolic acidosis.
Polyuria is treated with thiazide diuretics which act on distal collecting tubule and decreases water delivery.

Diuretics such as furosemide and hydrochlorothiazide are used to treat edema due to renal disease.

Hypertension is treated with beta-blockers, ACE inhibitors, calcium channel blockers and diuretics. These drugs are effective in cases presenting with congestive cardiac failure.

Angiotensin-converting enzyme inhibitors have also been effective in certain hypertensive cases of ARPKD.

End-stage renal disease is treated with renal transplantation and/or peritoneal dialysis. This is evident from growth failure with progressive uremia. Peritoneal dialysis is very effective in neonates, where enlarged kidneys compromise the patient’s respiratory function. This treatment is even successful in children with hepatomegaly, splenomegaly associated with bilaterally enlarged kidneys.

A kidney transplant is most effective in children presenting with renal insufficiency. During the procedure, a bilateral nephrectomy is also performed to treat uncontrolled hypertension or to replace massively enlarged kidneys. Successful kidney transplantations have very good prognoses in children which is evident in the form of their growth and development milestone increase.

Portal hypertension can be treated by inserting an esophageal endoscopy for sclerotherapy or banding of esophageal varices. In refractory cases of severe portal hypertension, a choice of portacaval shunting or liver transplantation is considered.
UTI and sepsis resulting from bacterial cholangitis are treated with the appropriate antibiotic therapy advised by the blood culture.

The prognosis of ARPKD is dependent on the severity and age at presentation. The mortality rate is high in patients presenting in perinatal and neonatal age groups with severe renal diseases like those who require ventilation, those with hypertension and those who are diagnosed to be in end-stage renal disease.

Long-term survival of the patient is found to be better once earlier years have been survived. In a study of 254 cohorts of ARPKD patients from North America, neonatal survivors reported 1 and 5-year patient survival rates of 85 % and 82 % respectively, while renal survival at 5, 10 and 20 years of 86 %, 7 1% and 42 % respectively.

Note: With increasing advancement in medical treatment and the management of end-stage renal disease, long-term survival rates are further predicted to rise.
Learn. Apply. Retain.
Your path to achieve medical excellence.
Study for medical school and boards with Lecturio.
References