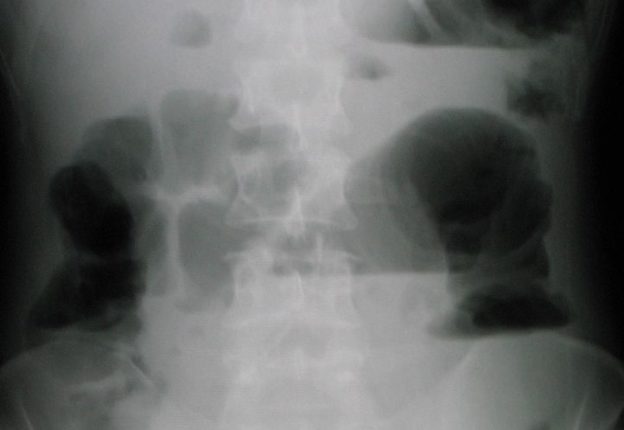 Meconium ileus (MI) involves an obstruction of terminal ileum by abnormally thick and sticky meconium. This disease entity is often seen in neonates with cystic fibrosis. Meconium ileus is responsible for about one-third of neonatal small-intestinal obstructions. Meconium consists of contents of the small bowel of neonates. Its chief components are succusentericus which in turn is made up of bile acids, bile salts and shredding of intestinal mucosa during intrauterine life (intestinal mucosal debris).

Evacuation of meconium within 6 hours of birth is considered normal.

Meconium, in addition to meconium ileus, is branded to cause three other associated syndromes which can be described as follows:

Epidemiology and Classification of Meconium Ileus

Meconium ileus accounts for about 33% of total neonatal bowel obstruction. This disease condition affects both male and female population equally and is more common in the white population. It is a rare medical condition with an incidence of 1 in 25,000 babies.

Meconium ileus can be classified as follows:

Obstruction due to inspissated meconium occurs at the level of the terminal ileum. The distal colon is narrow and contains minute pellets of stool. It is termed as “microcolon.”

Cystic fibrosis is a chronic crippling disease severely affecting the quality of life. In about 21% of patients without cystic fibrosis, meconium ileus is incriminated based on incomplete naïve nature of the interstitial cells of Cajal and myenteric plexus of Auerbach.

Pancreatic hydrolytic enzymes are normally responsible for the metabolism of fat and protein in the digestive tract. But as cystic fibrosis damages pancreas so the metabolism gets affected. The resultant lack of adequate digestion of fat and protein with subsequent formation of tenacious meconium material obstructing the ileum leads to meconium ileus. The meconium in cystic fibrosis has abnormally increased protein and abnormal mucous glycoprotein.

Cystic fibrosis is a chronic crippling disease severely affecting the quality of life. In about 21% of patients without cystic fibrosis, meconium ileus is incriminated based on incomplete naïve nature of the interstitial cells of Cajal and myenteric plexus of Auerbach.

Meconium ileus is a clinico-radiological diagnosis.

Clinical symptoms in a neonate with a family history of cystic fibrosis are sufficient to arouse suspicion for meconium ileus. Ancillary diagnostic tests available are as follows:

Abdominal X-ray: dilated bowel loops appearance without air-fluid levels is characteristic. Normal meconium is invisible on X-ray. “Soap-bubble” or “ground-glass” appearance of small air specks in meconium in the presence of associated clinical symptoms nails the diagnosis. Soap-bubble appearance by itself is not peculiar for meconium ileus and is also seen in patients with colonic atresia, Hirschsprung disease, and meconium plug syndrome. Calcified meconium flecks enclosing the peritoneal surfaces and the scrotum are encountered in meconium peritonitis.

Sweat testing: for diagnosis of cystic fibrosis when suspected.

The treatment strategy of meconium ileus begins with conservative management as the first line of action, followed by surgical intervention if the former fails.

This is often advocated as the first line of action in simple, uncomplicated, stable neonates. IV (intravenous) fluid line is set. Nothing is given orally. Nasogastric (NG) tube is put in the stomach through the nose to evacuate bile and air.

Gastrografin has fallen out of favor in view of rare but well-documented cases of fulminant colitis and dehydration being reported. Dilution of gastrografin to about 3:1 is required. Safer alternatives are now available. Hypaque, Omnipaque is typically used.

An exploratory laparotomy is typically performed in the case of complicated patients with associated atresia, perforation or necrosis. A double-barrel ileostomy is typically created and repeated N-acetyl cysteine lavages to clear off the meconium and is performed through the ileostomy. Primary anastomosis is attempted in the absence of peritonitis as per the surgeon’s decision.

Meconium ileus is a curable entity. Once treated adequately, there is no relapse. Survival at 1 year is about 90% in patients with simple meconium ileus. Further prognosis depends on the probable presence of underlying systemic disease such as cystic fibrosis.

The treatment then concentrates on enzyme replacement for augmentation of the nutritional status and control of recurrent pulmonary infections. Future prospects include gene transfer therapies and chemical modulation of the epithelial cell abnormality.

Meconium is a normal intestinal content of the neonate consisting of succus entericus, bile substances and denuded intestinal mucosa. It is passed at about 6-12 hours after birth by a normal neonate. Inspissated, tenacious meconium causing intestinal obstruction at the level of terminal ileum results in meconium ileus. Meconium ileus is often associated with cystic fibrosis and is often the first clinical presentation of the same.

A neonate with meconium ileus presents with small bowel obstruction with abdominal distension, pain and inability to pass meconium. An X-ray picture of “ground-glass” appearance is characteristic. The distal colon appears small and is termed as “microcolon.”

The treatment of meconium ileus begins with gastrografin enema supplemented with N-acetylcysteine. In the case of enema failure, complicated MI or unstable vitals, surgical intervention steps in.

Carlyle BE, Borowitz DS, Glick PL. A review of pathophysiology and management of fetuses and neonates with meconium ileus for the pediatric surgeon. J Pediatr Surg. 2012 Apr; 47(4):772-81.