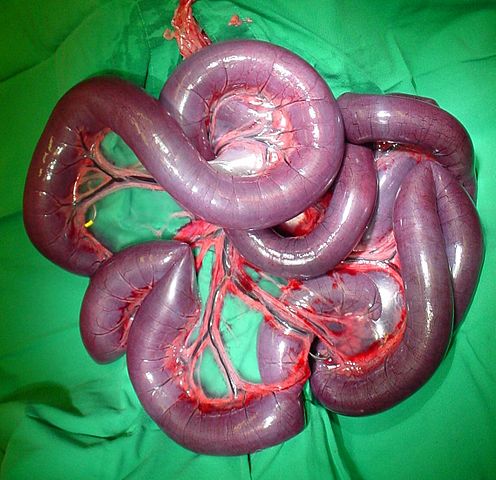 Intestinal malrotation is defined as an abnormal position of the duodenojejunal junction, within the peritoneal cavity. It occurs due to failure of the bowel to take its normal place. It may sometimes lead to acute intestinal obstruction, a life-threatening surgical emergency.

During the 2nd month of embryonic life, intestinal loops rotate in the yolk stalk outside the abdomen around the axis of the superior mesenteric artery. The duodenojejunal loop grows faster than the distal loop which facilitates its rotation of 90° anticlockwise. After the 2nd month, the duodenojejunal loop returns to the abdomen and rotates for an additional 180° anticlockwise.

Fixation of the rotated bowel follows to the retroperitoneum. The fixation of the bowel loops with a mesentery extending from the upper left abdomen to the lower right abdomen.

Nonrotation results after the return of the bowel loops to the abdomen which leads to the abnormal location of the colon to the left of the abdomen and the small bowel to the right. It is usually asymptomatic and discovered accidentally with imaging studies. During malrotation, the cecocolic loop rotates for 90° leading to fixation of the cecum in the mid-upper abdomen with peritoneum that can cause intestinal obstruction.

Malrotation can present itself with acute intestinal obstruction or insidious onset of chronic symptoms in older children. The symptoms of acute intestinal obstruction can be bilious vomiting, abdominal pain and distension, hypovolemia and sometimes peritonitis. Chronic symptoms of malrotation include abdominal pain, vomiting, chronic diarrhea, failure to thrive, biliary stones and pancreatitis.

Malrotation leads to the twisting of the narrow-based mesentery around the superior mesenteric artery leading to intestinal ischemia and necrosis – this process is known as a volvulus.

Volvulus can be self-limited leading to intermittent attacks of vomiting and abdominal pain.

Other forms of intestinal obstruction due to malrotation are duodenal atresia or duodenal obstruction with Ladd bands leading to vomiting with no abdominal distension.
Omphalocele is an abdominal wall defect at the midline covered only by amnion and peritoneum containing bowel loops. Warton’s jelly lies in between the two layers and the umbilical vessels run to insert the apex of the sac.

Pathogenesis occurs during the embryonic development, due to the rapid growth of the intestine and abdominal contents more than the abdominal cavity leading to physiologic midgut herniation. It becomes smaller and the abdominal contents protrude into the extraembryonic coelom at the base of the umbilical cord. Physiologic midgut herniation is evident at the 9th to 11th-week post-menstrual which should be reduced into the abdominal cavity by the 12th week. It is associated with nonrotation of the intestine and considered a rotational anomaly.

Simple laboratory tests can be used according to the presentation, but they are not used for final diagnosis. CBC with differential, stool guaiac and hemoglobin are helpful in the general assessment.

The first imaging modality of choice is plain abdominal radiographs. It is used in stable patients to exclude intestinal perforation and pneumoperitoneum. The gasless abdomen is common in infants with volvulus. Double bubble sign indicated duodenal obstruction while the passage of a nasogastric tube to the abnormal position of the duodenum is diagnostic.

Whirlpool sign and dilated duodenum also can be visualized in the case of volvulus. CT scan is rarely used for the diagnosis of intestinal malrotation due to limited diagnostic value, but, in specific cases, it can be beneficial e.g. whirlpool sign in the case of volvulus due to the twisting of the bowel mesentery around the superior mesenteric artery. MRI is useful for pregnant patients and in-utero diagnosis due to when the ionizing radiation is contraindicated. Flexible sigmoidoscopy is used in volvulus through the lower GI tract.

Malrotation in infants and young children should be differentiated from other diseases with a similar presentation including; acute necrotizing enterocolitis in infants, intussusception and other causes of intestinal obstruction or peritonitis.

Intestinal Atresia can occur anywhere from the duodenum to the colon. the more proximal the obstruction, the earlier the child will develop symptoms.

Cause: Due to a failure of canalization.

Barium study (Gastrograffin): Used if gases are present in the abdomen which indicates partial obstruction but we can’t identify the definite cause of duodenal obstruction by X-ray, especially as fear of Ladd’s bands which may lead to volvulus neonatorum. In Ladd’s bands, a barium study will show the duedo-jejunal junction on the right side (instead of the left side).

Treatment: All of the causes of duodenal obstruction – Duodenojejunostomy.

Mechanism: It is telescoping of one bowel segment into another. It is the most common cause of intestinal obstruction in children age 6-36 months. The Ileocolic junction is most involved, with invagination of the ileum into the colon.

Causes: Most children (75%) have no identifiable lead point:

Signs: Sausage-shaped mass may be felt. It’s usually concave towards the
umbilicus, which hardens during the attack and softens in between them.

Investigations: Ultrasound is the method of choice in detecting intussusception (has a sensitivity and specificity of 100%). A positive finding of the “target sign” should prompt immediate enema reduction (air or water-soluble contrast is instilled through the rectum and the pressure successfully reduces most obstructions). Air enemas are preferred because they are typically faster, cleaner, and safer than contrast.

Patients presenting with acute intestinal obstruction should be evaluated for signs of shock, sepsis, and peritonitis. First-aid measures should be implemented to those in shock, including resuscitation with fluids, nasogastric tube decompression, broad-spectrum antibiotics, and exploratory laparotomy. There is no need for imaging diagnosis in these patients.

In patients with no emergent symptoms, imaging diagnosis is conducted followed by surgical management to fix the bowel loops and prevent future malrotation. The surgical intervention consists of a division of any bands or adhesions compressing the duodenum, widening of the mesenteric base, appendectomy, exclusion of duodenal obstruction and making adhesions to fix the bowel to the right and the colon to the left to prevent malrotation.

Note: A laparoscopy can be performed for the Ladd procedure in the absence of any ischemia or peritonitis with good results.

Complications of surgery include short gut syndrome due to the re-section of the long segment of necrotic bowel, intestinal obstruction due to post-operative adhesions and recurrence of volvulus.

In the case of untreated malrotation with volvulus, there is a high risk of bowel infarction, subsequent short bowel syndrome, and death.

Intestinal malrotation in children via uptodate.com

Intestinal Malrotation in Children: A Problem-solving Approach to the Upper Gastrointestinal Series via doi.org