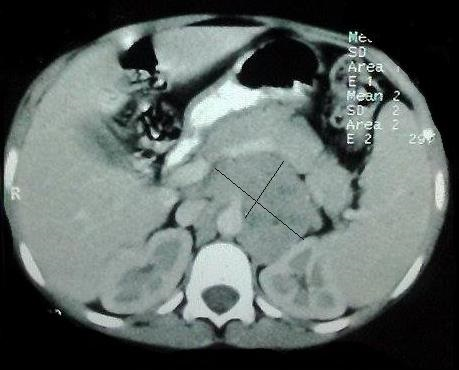 Granulomatosis with polyangiitis (GPA) is a rare autoimmune disease of unknown etiology that affects multiple organ systems. The main characteristic of GPA is necrotizing granulomatous inflammation and pauci-immune vasculitis of the small and medium-sized blood vessels.

The condition was previously known as Wegener Granulomatosis; however, the name was changed because of two main reasons:

Wegener was a Nazi physician; therefore, the American College of Rheumatology and the American Society of Nephrology preferred to abandon his name from the terminology.

The American College of Rheumatology is now naming rheumatologic and autoimmune conditions based on the etiology and pathophysiology of the condition, which is believed to result in an easier to comprehend and remember nomenclature.

Goodpasture’s syndrome is a clinical diagnosis that is characterized by acute glomerulonephritis and pulmonary alveolar hemorrhage. The condition is very rare in children and is commonly associated with small vessel disease that is mediated by antineutrophil cytoplasmic autoantibodies (ANCAs). Goodpasture’s syndrome can be a clinical manifestation of several medical conditions including GPA.

Goodpasture’s disease is a specific medical condition that is different from GPA. Goodpasture’s disease is characterized by the presence of anti-glomerular basement membrane (anti-GBM) antibodies. Anti-GBM antibodies usually show linear deposition on immunohistochemical studies of renal biopsies. This feature is not seen in GPA and can be used to differentiate between the two conditions.

Epidemiology of Granulomatosis with Polyangiitis and Goodpasture’s Syndrome

Information about the incidence and prevalence of GPA in children is scarce. The estimated incidence of GPA in the general population is 3 cases per 100,000 per year. GPA appears to be more common in people from European descent. GPA is rarely seen in African Americans.

The prognosis of GPA is dependent on the physician’s definition of remission and the type of remission induction therapy used. Generally, one third up to 90% of GPA patients go into remission.

Relapse in GPA is quite common and half of the patients experience a relapse in 5 years post-remission. Older patients, target organ damage, and renal involvement have a direct effect on the survival rate of the patient. Children without renal involvement have a 100% 5-year survival rate. Cardiovascular disease is also more common in patients with GPA.

The main complications of GPA are:

The main causes of death in GPA include:

The use of immunosuppressive therapy also puts the patient at an increased risk of developing malignancies.

Pathology of Granulomatosis with Polyangiitis and Goodpasture’s Syndrome

The main pathology seen in GPA is geographic necrosis and granulomatous inflammation of the small and medium-sized blood vessels. Blood vessels within the airways and the kidneys are the main ones to be affected which explains why GPA can cause Goodpasture’s syndrome.

ANCAs have been implicated in the pathology of GPA. Because of the implication of ANCAs, the condition is believed to be caused by an impaired humoral autoimmune response to an unknown antigen. Cytoplasmic diffuse ANCA known as C-ANCA is the main abnormality found in immunohistochemical studies of biopsies taken from affected tissues in patients with GPA. The presence of C-ANCA has been associated with disease activity and rate of relapse.

GPA is an autoimmune disease where genetic predisposition appears to play a critical role in the etiology. Alpha-1 antitrypsin gene, cytotoxic T-lymphocyte antigen 4 gene, PTPN22*620W gene, and DPB*0401 gene have been all linked to GPA.

This interaction activates glomerular infiltration of monocytes and polymorphonuclear leukocytes (PMNs). Fibrinogen from the damaged GBM leaks into the Bowman space, where it gets polymerized into fibrin. Eventually, crescent formation ensues and the glomeruli are damaged by this mechanism. A similar mechanism is believed to happen with the alveolar basement membrane in the lungs.

Additionally, the human leukocyte antigen (HLA) DRB1*1501 is also associated with an increased risk of anti-GBM disease. HLA-DR2 is also positive in 88% of patients with Goodpasture’s syndrome. HLA-DR2 is positive only in one-third of the general healthy population.

Clinical Presentation of Granulomatosis with Polyangiitis and Goodpasture’s Syndrome

Conjunctivitis, uveitis, episcleritis, and proptosis are also commonly seen in patients with GPA.

Chronic sinusitis is seen in two-thirds of GPA cases. Epistaxis is also a common finding of GPA and is found in 10% of the cases. Saddle nose deformity due to the collapse of nasal support is commonly seen in patients with GPA. Stridor because of tracheal or subglottic granulomatosis might be seen.

The main pulmonary findings of GPA are:

Polyarticular symmetric joint pain can be seen. Arthritis is rarely seen in GPA. In 10% of the cases, the main presentation might be that of end-stage renal disease.

Also seen in patients with GPA are:

The main presenting feature of Goodpasture’s disease is hemoptysis. Dyspnea, fatigue and cough are also seen.

Symptoms and signs of renal disease in Goodpasture’s syndrome in children include hematuria and oliguria. Edema can be seen in some patients. Hypertension is rarely seen in children with Goodpasture’s disease-related kidney involvement.

Diagnostic Workup for Granulomatosis with Polyangiitis and Goodpasture’s Syndrome

Laboratory investigations in GPA might reveal elevated creatinine and blood urea nitrogen levels. Normochromic normocytic anemia might be seen in half of the cases of GPA. Erythrocyte sedimentation rate and C-reactive protein levels are elevated in 90% of the cases. Patients with kidney disease related to GPA typically have:

ANCs can be detected with serologic testing. The available assays can detect C-ANCA, perinuclear P-ANCA, and atypical ANCA. The presence of C-ANCA against PR3 is most specific for GPA. C-ANCA is positive in approximately 90% of the cases of GPA. C-ANCA levels can be also used to predict relapse. A rising level is worrisome and it can mean that a relapse is coming soon.

Chest X-rays in GPA typically show multiple nodules and masses. Cavitation of the nodules is 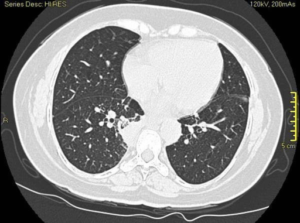 seen in half of the cases. Diffuse alveolar hemorrhage can present as diffuse alveolar opacities. High-resolution computed tomography (HRCT) can be used in the evaluation of the lungs in a patient with GPA.

The typical findings on lung HRCT are consolidation, patchy and diffuse ground-glass opacities. Destructive sinusitis is commonly seen in GPA. Thin-section sinus CT scans are used to evaluate the sinuses in children with GPA.

The diagnosis of GPA is confirmed with tissue biopsy from a site of active disease. The mainly biopsied organs are the lungs and kidneys. Tissue diagnosis is usually not needed as the clinical picture when combined with a positive C-ANCA result might be enough to make the diagnosis with high probability.

A lung biopsy can show parenchymal necrosis, vasculitis and granuloma formation. Kidney biopsy typically reveals segmental pauci-immune crescentic necrotizing glomerulonephritis in patients with GPA. Leukocytoclastic vasculitis is the main finding of a skin biopsy in a patient with GPA.

The presence of linear immunoglobulin G deposits along the glomerular capillary can be confirmed by immunofluorescence studies of renal biopsy. 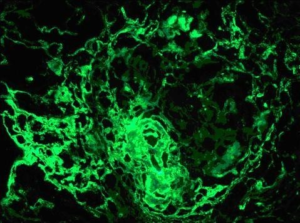 Crescentic glomerulonephritis is also a common finding with Goodpasture’s disease.

Pulse oximetry is also indicated as hypoxemia is a common finding in patients with Goodpasture’s disease. A lung biopsy to confirm the diagnosis can be obtained with bronchoscopy and bronchoalveolar lavage.

Management of Granulomatosis with Polyangiitis and Goodpasture’s Syndrome

GPA is mainly treated with corticosteroids and cytotoxic drugs. To choose an appropriate treatment regimen in GPA, the disease needs to be graded. The following table summarizes the grading of GPA per the European Vasculitis Study Group recommendations.

These therapies are typically used for one year and a half after remission.

This approach should also be used in children, but the duration of treatment should be lowered to 5 days instead of two weeks. Cyclophosphamide use during this period is also recommended by some experts.

Granulomatosis with polyangiitis via mayoclinic.org