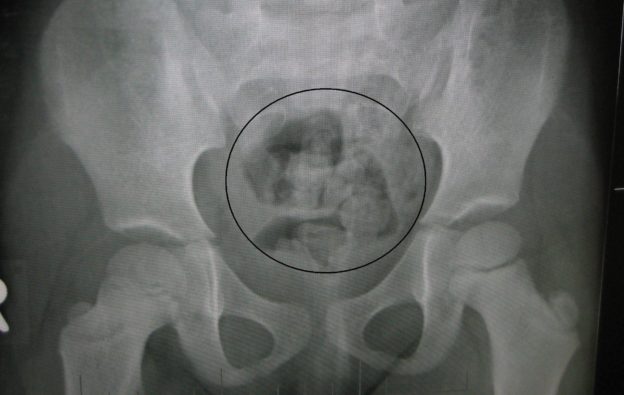 Image: “Constipation in a young child as seen on X-ray.” by James Heilman, MD – Own work. License: CC BY 3.0

Constipation definition is relative to stool frequency, consistency and the effort involved in passing the same. To expound on “abnormal,” we need to define “normal.”

In the UK, motions about thrice a day to alternate daily are considered “normal.” Constipation often conveys the infrequent passage of hard, dry stool. Symptoms for more than two weeks are considered significant.

The Iowa criteria of constipation meant for children at least two years of age comprises of two or more of the following characteristics in the 8 weeks preceding examination:

Functional (voluntary) withholding is the most common cause of constipation.

Functional constipation, as defined by the ROME III classification, requires two or more of the following features in a child with developmental age ≥ 4 years and occurring at least once per week for at least two months before diagnosis (with insufficient criteria for a diagnosis of irritable bowel syndrome).

The features of the ROME classification are summarized as below:

The latest in the terminology of pediatric constipation is “non-retentive fecal soiling.”

Originally coined for children soiling albeit no difficult infrequent defecation; PACCT (The Paris Consensus on Childhood Constipation Terminology Group) define this pathology as “passage of stools in an inappropriate place, occurring in children with a mental age of 4 years and older, with no evidence of constipation on history or examination.”

Childhood constipation is most commonly seen in toddlers around the time of toilet training. Positive family history is often present in about 26 – 48% of patients.

Constipation is often a symptom of a grave problem, other times a diagnosis by itself. The pathogenesis varies as per the cause, trigger and the circumstances around which a child develops constipation.

Some peculiar situations can be tabulated as follows:

Constipation being a varied etiology, one has to be cautious in segregating organic from functional causes as the treatment differs accordingly.

A systematic approach with meticulous history taking and disciplined progress through examination and then imaging is often successful. History should reveal any positive findings which help in classifying “constipation” as per the type of etiology mentioned above. A detailed history about bowel habit, toilet training, and stool habits in different environments at school and home is a must.

A rectal examination should be carried out in accordance with the NICE guidelines by an expert and should reveal information about sphincter tone and rectal loading.

A perineal examination is helpful in anorectal anomalies and perianal infections. Associated neurological, mental status and other systems examination is carried out when deemed necessary.

History and examination must decisively rule out the few tell-tale signs of organicity as mentioned below:

Constipation is mainly a clinical diagnosis. A few ancillary helpful tests are mentioned below:

The following differentials should be addressed when dealing with a child with constipation:

The liquid stool may pass around the hard stool mass and give a false impression of diarrhea (encopresis).

Acute relief of constipation by dislodging the impacted stools is the first step in the management of constipation. Disimpaction is typically performed over 2-5 days. Various measures utilized for disimpaction can be summarized as follows:

Once disimpaction occurs, maintenance therapy is initiated to prolong the benefits of disimpaction and eventually to prevent recurrence. It typically takes about 3-12 months and is terminated once the child achieves the smooth return of bowel movements.

Organic diseases are to be treated as per cause.

The need for surgical intervention is seldom and only after failure of medical management.

Pediatric constipation is not a serious condition, even though it makes children uncomfortable. However, untreated or chronic constipation can lead to the following complications:

Passage of feces in inappropriate situations after a chronological age of 4 years (or equivalent developmental level) is termed as encopresis.

Encopresis is more common in boys to the extent that 4-6:1 is the claimed sex ratio.

A child with encopresis may come up with the following signs and symptoms:

Salient points in the diagnostic assessment of pediatric encopresis can be summarized as follows:

Encopresis is often an embarrassing diagnosis and all efforts towards the alleviation of anxiety should be undertaken. It is often self-limiting and benign otherwise. Treatment addresses constipation and then the underlying psychosocial stressor in a step-wise manner. The strategy can be summarized as follows:

Regression of encopresis is rather a rule than a myth in most of the cases, irrespective of the treatment modality used. Albeit the above statement, treatment is often indicated as it is associated with long-lasting psychological effects on the young minds.

Childhood constipation is a common, disturbing complaint. It is often a symptom than a diagnosis by itself. Various criteria are proposed to objectively define “constipation.” Functional constipation is the most common cause of constipation. Infrequent defecation, pain, soiling, stool-withholding, and enuresis are often involved symptoms.

Meticulous history, examination, and supplementary diagnostic tests help clinch the diagnosis. One should always be cautious of the “red-flag” signs which indicate underlying serious organic disease. Treatment of chronic constipation is divided into acute disimpaction phase for immediate relief of constipation, followed by a maintenance phase to evade relapses.

Laxatives, diet modifications, education and counseling, and behavioral therapy are instrumental in the treatment of pediatric constipation. Pediatric encopresis is an inappropriate passage of feces in inept circumstances in children above 4 years of chronological age, or after reaching equivalent developmental age. It is more common in boys and is variously classified into primary/secondary and retentive/non-retentive categories.

Psychosocial stressors are often associated with encopresis. Consequently, behavioral therapy to ameliorate the same plays a significant role. Encopresis usually resolves in the majority of patients irrespective of the treatment modality used.