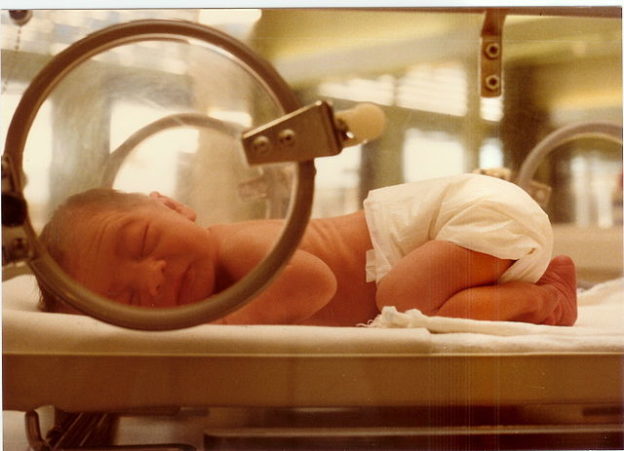 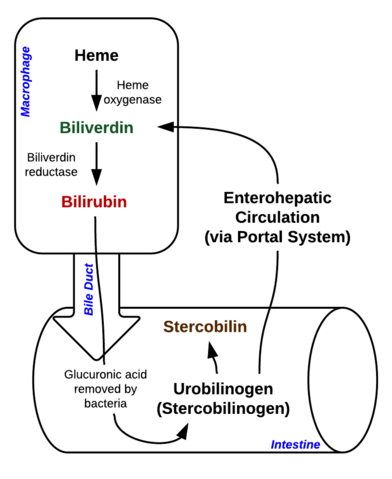 Image: “Breakdown of Heme in macrophages and intestine” by Johndheathcote. License: CC BY-SA 3.0

Hyperbilirubinemia can be defined as an elevated concentration of bilirubin in the blood, which is expressed in the form of jaundice (also called icterus). Jaundice appears when the yellow bilirubin pigments are deposited in the skin, sclera, mucous membranes and other tissues leading to yellowish discoloration.

The normal range of bilirubin is:

It is considered as hyperbilirubinemia when:

There are several conditions  of conjugated hyperbilirubinemia in children :

To make a diagnosis of hyperbilirubinemia in children, it is very important to take a good clinical history, including the parents and close relatives’ pathological antecedents, the possible existence of consanguinity between the parents, possible complications during pregnancy and delivery, possible exposure to an infectious disease before or after birth (such as hepatitis, malaria, cytomegalovirus and leptospirosis) among others. 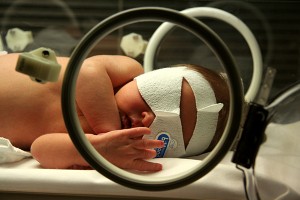 Physical examination is very important in the diagnosis of hyperbilirubinemia. The main sign is jaundice or yellowish discoloration of the sclera, mucous membranes, and the skin. The urine of the baby becomes dark and, depending on the cause, the feces can be white.

It is also extremely important to perform a neurological examination of the baby (reflexes and external stimuli response) in order to determine the central nervous system affliction (that is known as kernicterus or bilirubin encephalopathy). This indicates the presence of severe hyperbilirubinemia.

Other important parameters that must be examined include growth parameters, vital signs, cardiac and respiratory murmurs, abdominal examination (in order to determine the abnormal growth of the spleen or liver).

The laboratory tests required are:

In other terms, liver function tests (LFTs or LFs) are necessary for diagnosis and they include prothrombin time (PT/INR), activated Partial Thromboplastin Time (aPTT), albumin, bilirubin (direct and indirect), and liver transaminases (AST and ALT). Biopsy and imaging studies are usually reserved for those cases with an unclear diagnosis or discard obstructive pathologies.

Biliary atresia is another very frequent cause of conjugated hyperbilirubinemia. The patient may have a complete or partial obstruction of the extrahepatic biliary tree at different points; however, the most common parts affected are the hepatic duct and the common bile duct. Partial obstruction is usually caused by a fibro-inflammation along the bile duct.

This fibro-inflammation is due to a perinatal disease, usually a viral infection that affects the biliary duct mucosa. When the infection progresses, the immunologic system responds and there is epithelial thickening in the mucosa leading to obstruction of the duct. As time progresses, the proliferating mucosa develops sclerosis and fibrosis, causing total duct atresia during the first month of life and its subsequent complications.

In the diagnosis of biliary atresia, it is also very important to take a complete clinical history, perform good physical examination and laboratory tests as mentioned earlier; however, in this case, imaging techniques (like ultrasound, hepatobiliary scan (HIDA) or even an intraoperative cholangiogram) can be very useful in the diagnosis of the disease.

No primary medical treatment is effective in the correction of biliary atresia; therefore, once the diagnosis is confirmed, surgical intervention is necessary and, in many cases, the surgery itself can be diagnostic. It can be done as an intraoperative cholangiogram or a Kasai portoenterostomy. Liver transplantations are reserved for severe cases.

Finally, choledochal cysts, better known as congenital bile duct dilatation, can also cause conjugated hyperbilirubinemia. The most common congenital abnormality of choledochal cysts is the enlargement of the extrahepatic bile duct (1 from every 100,000-150,000 newborns). The symptoms of choledochal cysts can present at any age; however, they are characteristically seen with obstructive jaundice along with abdominal pain in infants and children. They have a female predilection with a female to male ratio of about 3–4:1. They are more common in certain Asian races. 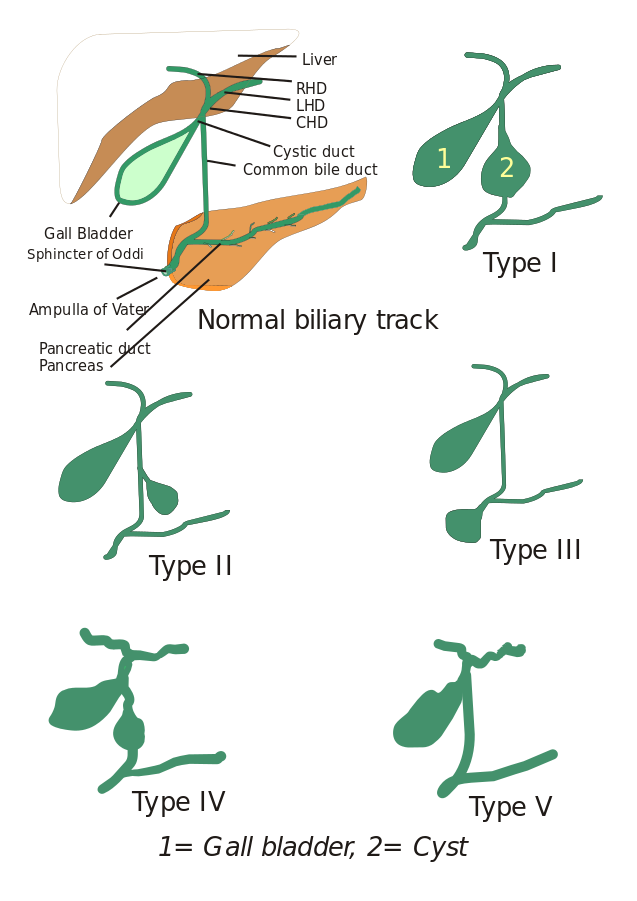 It is commonly seen in infants aged 1 to 3 months. Clinically, they present with fever, pain in the right upper quadrant of the abdomen, acholic or pale stools and hepatomegaly and this picture is similar to biliary atresia. In the case of prenatal diagnosis of choledochal cyst, jaundice is not apparent until 1 to 3 weeks after birth. When choledochal cyst presents later, it does not become clinically evident until after 2 years of age and may present with a classic triad of abdominal pain, palpable abdominal mass, and jaundice; of which two are found in almost 85% of children at the time of presentation. Other common features are cholangitis, pancreatitis and biliary peritonitis due to rupture of the cyst.

Ultrasound scanning helps in the diagnosis of choledochal cysts and it has a very high specificity of 97% in children, but a low diagnostic accuracy antenatally; thus, it is used as a primary diagnostic imaging modality for neonatal jaundice that persists more than 2 weeks post-birth. It is also useful in the differentiation between choledochal cysts and biliary atresia.

The use of computed tomographic scans for diagnosing choledochal cysts is controversial. Small size cysts or choledochocele are missed on CT scans but are easily seen on magnetic resonance cholangiopancreatography (MRCP). CT scanning may be better than MRCP in the postoperative period for detecting the location of the biliary-enteric anastomosis and in defining any stenosis thereof.

Magnetic resonance cholangiopancreatography (MRCP) is superior at detecting and defining lesions. Nowadays, it is considered as the gold standard in the imaging of choledochal cysts; however, it has a drawback of not being able to precisely detect any anomalous pancreaticobiliary unification. Nevertheless, this does not play a major role in determining patient management. In addition, the sensitivity of MRCP is more in adults than in infants.

Endoscopic retrograde cholangiopancreatography (ERCP) is the best tool for knowing the biliary anatomy and is thus helpful in the diagnosis of choledochal cysts.

Treatment primarily includes surgical intervention. An internal drainage procedure known as a cyst-enterostomy (that could be either cyst-duodenectomy or cyst-jejunostomy) was done in the past for surgical treatment of choledochal cysts; however, various complications were seen postoperatively such as malignancy in the remaining cyst, pancreatitis, and cholangitis; thus, they were abandoned.

At present, the recommended surgical procedure is cyst excision and then Roux-en-Y hepaticojejunostomy or choledochojejunostomy. Because of cyst excision, there is a reduction in the incidence of stricture formation postoperatively. Other alternatives i.e. hepatic duodenotomy have been suggested so that the anastomosis is accessible to ERCP in case of postoperative complications. However, the use of hepatic duodenotomy has not been widely accepted as it can cause biliary reflux and cholangitis.

Post cyst excision, probing and copious lavage of the intrahepatic ducts with saline is necessary to remove sludge and possible stones from the ductal system completely. Furthermore, the obstruction can be present in the proximal biliary system that can be dilated. Consequently, prior to excision of the cyst, an intraoperative cholangiography is obligatory.

There are a lot of inherited syndromes related to hyperbilirubinemia and intrahepatic cholestasis. Many of them are related to genetic mutations including the gene SERPINAI (alpha 1- antitrypsin), JAG1 (causing Alagille syndrome), ATP8B1 (also known as FIC1), ABCB11 (bile salt export pump [BSEP]), MDR3 (ABCB4), and MRP2 (causing Dubin-Johnson syndrome).

Alagille syndrome is an autosomal dominant genetic disorder that can affect many parts of the body. The mutation occurs in the short arm of chromosome 20 (20p12). One in every 20 or 30 mutations occurs de novo. One of the most affected organs in Alagille syndrome is the liver and the bile ducts. These bile duct malformations cause bile build up in the liver i.e. cholestasis, which causes liver scarring thereby altering its functioning.

The signs and symptoms arising from liver damage in Alagille syndrome may include jaundice, itchy skin, and xanthomas. However, the heart is also affected and the patient may have pulmonic stenosis. In pulmonic stenosis, there is impaired blood flow from the heart into the lungs. There may also be co-existent congenital heart diseases, such as ventricular septal defects, tetralogy of Fallot etc. The brain, spinal cord, kidneys, and blood vessels can also be affected.

Alagille syndrome has characteristic facial features. The patient usually has a triangular face, a broad and prominent forehead, wide nasal bridge, deep-set eyes, and a small, pointed chin. The diagnosis is difficult and requires at least 3 of the typical physical features, the evidence of bile ductus obstruction (cholestasis) and a liver biopsy.

Treatment is dependent on the severity of the disease in Alagille syndrome. In the case of mild disease, ursodeoxycholic acid is administered to facilitate the biliary flow and antihistamines like diphenhydramine are given to control the pruritus. For severe cases, a liver transplant may be required. Vitamin supplementation has been found to be helpful, especially with vitamins A, D, E and K. Zinc supplementation is also beneficial. These patients have an inability to absorb these vitamins and thus, supplementation helps in the facilitation of optimal patient growth.

This syndrome is characterized by isolated conjugated chronic hyperbilirubinemia, without evidence of hemolysis due to a defect in the elimination of conjugated bilirubin in bile (intrahepatic cholestasis). It’s caused by a mutation in the MRP2 gene. It’s a benign condition that doesn’t require specific treatment.