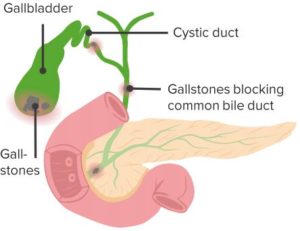 Cholecystitis refers to inflammation of the gallbladder. Pediatric cholecystitis is rare. There are subtle differences in the anatomic and pathologic features of the disease between adults and children.

Extensive, dedicated research has not yet been conducted to discern the clinicopathologic features of the disease and establish the best treatment options. The differences between adult and pediatric cholecystitis can be tabulated as below:

The incidence of pediatric cholelithiasis and cholecystitis is on the rise. The estimated current incidence is about 1.9%.

Few anatomical characteristic eponyms should be familiar to one while studying cholecystitis.

Variously known as the hepatobiliary triangle or the cystohepatic triangle, this potential space at the porta hepatis contains the cystic artery and the cystic duct. Its boundaries are comprised of the cystic duct joining the:

Optimum dissection in the Calot’s triangle, and perfect ligation of the cystic artery and the cystic duct, are essential elements of surgical cholecystectomy.

Cholecystitis denotes inflammation of the gallbladder. There are several types of cholecystitis based on the inciting pathology. This taxonomical segregation can be summarized as follows:

The key factors in gallstone formation in the pediatric population can be summarized as follows:

Unlike adult cholelithiasis, pediatric cholelithiasis and cholecystitis are often associated with certain systemic disorders that make the child susceptible to gallstone disease. In 90% of cases, obstruction of the cystic duct neck by a stone is the most common reason for emergency cholecystectomy in children, especially when one or more factors render them susceptible to the disease. These risk factors can be summarized as follows:

A girl with fever and severe abdominal pain. She had a fever and has been losing weight despite abdominal bloating. She is rushed to the OR. Her BMI is 30 kg/m2. The pain is of an acute nature with a sharp character, located in the right upper quadrant and radiating to the back. Ultrasonography reflects gallstones and a thickened gallbladder wall.

What do her providers suspect she has?

The example above is a classical presentation of acute cholecystitis. It is often a clinical diagnosis. The chief complaints can thus be summarized as follows:

The abdominal pain commonly associated with cholecystitis is very characteristic and has the following unique properties:

Physical examination findings can be listed as follows:

There are a few well-known specific signs that appear during the clinical assessment of a patient with acute cholecystitis. They have been summarized below.

Inhalation while the examiner is palpating in the right hypochondriac region along the bottom of the rib cage results in sharp pain in patients with acute cholecystitis.

Escalated sensitivity below the right scapula, with hyperesthesia, is encountered in the clinical examination of patients with acute cholecystitis.

The diagnosis of acute cholecystitis in the pediatric population is often based on clinical findings and few confirmatory non-invasive tests, such as ultrasonography. When used judiciously, ultrasonography has high sensitivity and specificity.

The key features of acute cholecystitis on ultrasonography, which help clinch the diagnosis, are:

The beneficiary role of imaging studies in the diagnosis of cholecystitis can be mentioned briefly as follows:

A CT scan is not as sensitive as ultrasonography. Its specific use is to document the presence of gallstones with similar density to bile, which is potentially undiagnosed on ultrasonography. Reactive liver hypervascularity with enhanced parenchymal changes can be appreciated. The tensile gallbladder fundus sign is a CT-based sign of cholecystitis. It is about 75% sensitive and 95% specific, with a confirmed role in establishing an early diagnosis.

MRI sensitivity parallels that of ultrasound; however, in the pediatric population, MRI is not user-friendly and has many caveats, such as its expensive nature, discomfort during the procedure, and requiring great co-operation from the patient.

ERCP stands for endoscopic retrograde cholangiopancreatography. It is an invasive test and has a key diagnostic and simultaneous therapeutic role in managing common bile duct stones. Common bile duct stones are encountered in patients with predisposing systemic diseases, such as hemolytic disorders, sickle cell anemia, and other hemoglobinopathies.

MRCP is the MRI-based, non-invasive equivalent of ERCP for diagnostic use only. It can demonstrate affected stones as filling defects. Co-operation from the pediatric population for such procedures is very difficult to procure; hence, these investigations are used quite infrequently compared to the adult patient population.

The hepatobiliary iminodiacetic acid (HIDA) scan is the most sensitive test for diagnosing cholecystitis. The radioactive tracer is injected and, subsequently, drainage of the same is documented. HIDA use is discouraged in children because of the radioactive material.

Managing pediatric acute cholecystitis involves short-term and long-term goals. The short-term goals revolve around managing pain, controlling inflammation, and removing the inciting factor if any. The treatment is surgical cholecystectomy.

Long-term goals include ruling out and treating the presence of underlying predisposing factors, such as obesity, control of hemolytic disorders, evasion of a hemolytic crisis in patients with sickle cell disease, and other hemoglobinopathies. Preventing repeated bouts of subacute cholecystitis in patients with hemolytic disorders and curbing progression to chronic cholecystitis is also essential. One needs to mitigate risk factors in individuals who are at risk. Weight loss is often a simple, yet effective, solution in such pediatric patients.

More data and research are required to determine conclusively when to operate and when to conserve a child with acute cholecystitis.

The most relevant pivotal aspects of laparoscopic cholecystectomy which are unique to the pediatric population can be mentioned as follows:

Cholecystitis in the pediatric population is different from that in adults. Most children suffer from idiopathic cholelithiasis.

Ultrasonography is a simple diagnostic test with high sensitivity and specificity. Sonographic Murphy’s sign is increased abdominal tenderness on the application of pressure of the ultrasonography probe. Other imaging studies, such as CT scan, MRI, and HIDA scan are seldom used in the pediatric population.

Other important management features include the prevention of bouts of cholecystitis in patients with systemic diseases, control of risk factors, and avoidance of developing chronic cholecystitis.