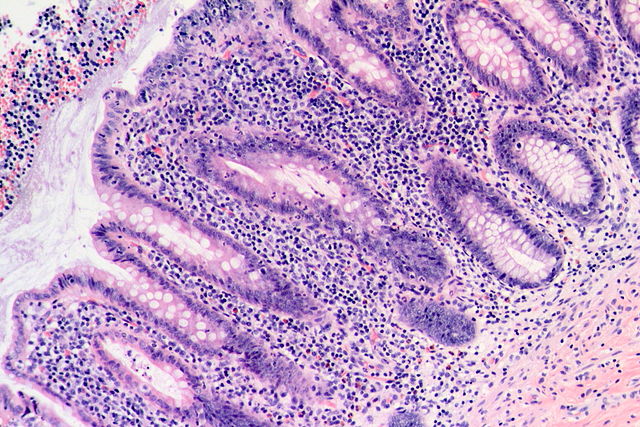 Appendicitis, as the name suggests, refers to acute inflammation of the appendix. Acute appendicitis can result in serious complications, usually relating to perforation, and is considered a surgical emergency.

Appendicitis is the most common acute surgical problem in the pediatric population. In the United States, about 80,000 children are affected each year. It’s diagnosed in about 8% in children presenting in the ER with an acute abdomen. Appendicitis is very common in the second decade of life, with only 5% of children diagnosed with appendicitis are younger than 5 years old, making its diagnosis is challenging.  Appendicitis is slightly more common in boys. It also has a seasonal peak incidence during the autumn and spring months in the US. 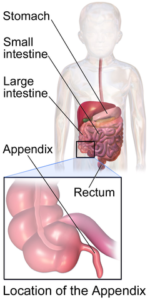 Multiple etiological factors have been associated with appendicitis. One key pathway that results in acute appendicitis starts with obstruction of the appendiceal lumen. Luminal obstruction may be caused by various factors, such as lymphoid hyperplasia, a fecalith, tumors, parasites or a foreign body.

Lymphoid follicles in the submucosa are not prominent at birth but increase in number during childhood and peak during adolescence, which is when appendicitis occurs most commonly. After the age of 30, lymphoid follicles decline in number.

Fecalith refers to a hard mass of feces and has been identified as a more common cause of appendicitis in developed countries with low-fiber diets. However, a lack of fiber in the diet has not been established to cause appendicitis.

There is an increased incidence of appendicitis in children with cystic fibrosis. It is suggested that this is because of the presence of abnormal thickened mucus.

Aside from luminal obstruction, other factors may be responsible for causing appendicitis. This is based on the finding that less than 50% of pathologic specimens show luminal obstruction. Other suggested etiologies include infection with bacteria, such as Shigella, Salmonella and Yersinia, and viruses, such as coxsackie B virus and adenovirus.

It has also been noted that, in some cases of appendicitis, there is a familial predisposition. This is especially the case in children presenting under the age of 6.

Pathology and Pathophysiology of Pediatric Appendicitis

Luminal obstruction of the appendix leads to increased intraluminal pressures, which causes venous and lymphatic congestion, causing dilatation and thickening of the luminal wall. Thereafter, the arterial supply is impaired, resulting in disruption of the mucosal barriers and Intraluminal bacterial overgrowth, with subsequent bacterial invasion, inflammation, and ischemia of the appendiceal wall, and eventually necrosis (called gangrenous appendicitis) and perforation.

With perforation, fecal contamination may be localized when the omentum ‘walls off’ the area from the rest of the abdomen, forming a localized collection of pus (an abscess) or an inflammatory mass (a phlegmon).

If not localized, the perforation can result in diffuse peritonitis, owing to a spread of the fecal contaminants in the peritoneal cavity. It is important to note that in young children, the omentum is poorly developed and, therefore, less capable of controlling the local infection.
Perforation and peritonitis can lead to further complications, such as bowel obstruction, septic shock and renal failure.

Symptoms and Signs of Pediatric Appendicitis

Pediatric patients with appendicitis may present in a variety of ways, from classical to atypical clinical pictures. The most characteristic feature of appendicitis is localized pain in the right iliac fossa (or right lower quadrant).

Abdominal pain is usually the first symptom. Initially, the pain may be felt in the peri-umbilical region as a vague, colicky and intermittent pain, due to visceral inflammation. In the next 12-24 hours, the pain then develops into somatic pain that is localized in the right iliac fossa. Abdominal pain may be worse with movement due to peritoneal irritation.

Another common symptom is vomiting, which occurs in most children with appendicitis. Nausea and vomiting usually occur after the onset of abdominal pain. Anorexia is also usually present, a classic finding in appendicitis. Some children also experience diarrhea.

Localized abdominal tenderness in the right lower quadrant (RLQ) is an important, reliable sign in appendicitis. The classic point of tenderness is called McBurney’s point, found one-third of the way up the line from the ASIS to the umbilicus. There may be guarding and rigidity over the area, indicating localized peritonism. There may be a mass in the RLQ, representing a localized mass or inflammatory phlegmon.

Patients may have a low-grade fever or no fever; high-grade fever may be present in complicated cases. In most cases, patients are tachycardic.

Overview of signs and symptoms

The diagnosis of appendicitis should be suspected clinically before undergoing to further investigations as they might be normal.

There are no individual lab tests that are specific or sensitive for appendicitis. However, they may be useful when considered collectively. 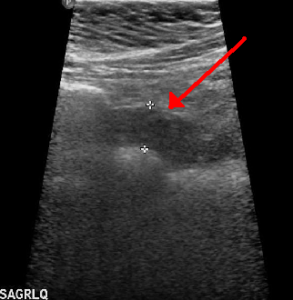 Ultrasound is commonly used to evaluate cases of acute appendicitis, with a sensitivity and specificity of over 90%.

Features indicative of appendicitis include wall thickness >6mm, lack of compressibility, luminal distention, complex mass in the RLQ, or the presence of a faecalith. 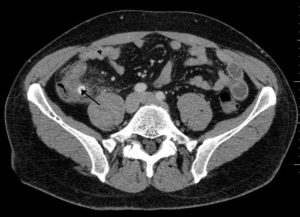 A CT scan of the abdomen is considered a gold standard test for appendicitis, with over 95% sensitivity and specificity. CT findings include increased wall thickness and distention of the appendix, fat streaking, an inflammatory phlegmon or abscess.
Fecaliths are better appreciated on CT scans compared to plain films. Disadvantages of CT scans include possible radiation exposure, a possible need for contrast and a possible need for sedation.

MRI has similar diagnostic accuracy to a CT scan, without the exposure to ionizing radiation. However, disadvantages include greater cost and increased need for sedation.

It’s one of the common scores used in the diagnosis of appendicitis. A score of more than 7 rises the suspicion of appendicitis and need for surgery.
The Alvarado score has a 10 point score derived from 7 components:

Pediatric patients with suspected appendicitis require an early surgical review. Strong analgesics, such as opioids, should not be avoided for fear of masking the pain of appendicitis and causing diagnostic confusion.

The definitive treatment for appendicitis is by a prompt appendectomy. This can be carried out via a laparoscopic (keyhole) approach or traditionally, through an open approach with a muscle-splitting incision in the RLQ. Surgery should occur within 12-24 hours of the diagnosis.
Children with appendicitis are usually at least mildly dehydrated. Supportive care with IV fluid resuscitation and correction of electrolyte abnormalities should be carried out pre-operatively to stabilize the patient.

Patients should also be administered with antibiotics. In uncomplicated cases of appendicitis, a pre-operative dose of a single broad-spectrum antibiotic may be given. In cases of perforated or gangrenous appendicitis, triple antibiotics may be given, with ampicillin, gentamicin, and metronidazole or clindamycin.

In patients with perforated appendicitis, surgery is less urgent and preoperative management is especially important since these patients may have significant physiological disturbances. The period of stabilization is, therefore, longer, with fluid resuscitation and antibiotics. Delayed appendectomy during the index admission or interval appendectomy, 4-6 weeks following initial presentation, is subsequently carried out.

Progression and Prognosis of Pediatric Appendicitis

While mortality rates of appendicitis are low, morbidity rates remain significant. Morbidity is often related to a perforated appendix, with infectious complications. In younger children, complications are more common. In children below the age of 5, perforation rates are up to 82%. In infants, although appendicitis is extremely rare, perforation rates approach 100%.

The progression of symptoms with appendicitis typically occurs at a rapid pace, with a small diagnostic opportunity before perforation.

Perforation may occur within 48 hours of the onset of illness, and if the diagnosis is delayed after this time, the perforation rate is higher than 65%. Perforation is a significant complication, potentially resulting in further complications including peritonitis, bowel obstruction, renal failure, and septic shock. However, patients with advanced appendicitis generally respond to antibiotics, fluid resuscitation and other measures.