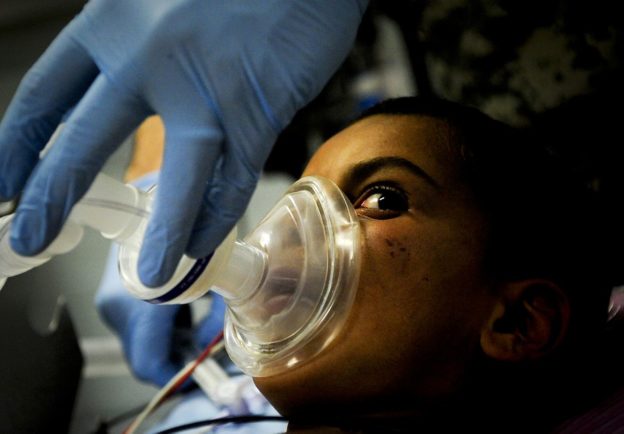 Image : “An Afghan child is prepared for anesthesia before undergoing a hydrocelectomy at Forward Operating Base Farah in Farah province, Afghanistan” by SrA Rylan K. Albright . License: Public Domain

Before anesthesia, surgical procedures were difficult and dangerous. They were usually performed only as a last resort. In the 1840s, physicians discovered that substances like ether and chloroform effectively rendered patients unconscious, which launched the practice of anesthesia. A detailed history of anesthesia is available here.

Airway of a Child

The differences between a child’s and an adult’s airway can be summarized as follows:

All these factors culminate in increased airway resistance, per Poiseullie’s law, as well as decreased residual lung volume, higher minute ventilation, and increased oxygen consumption. In children, the oxygen reserve is tenuous, with underdeveloped respiratory drives. These factors are important in pediatric mechanical ventilation and airway management.

Differences in other systems in the pediatric population, when compared to adults, are tabulated below for easy recall:

Airway devices for pediatric anesthesia must be designed specifically for children.

The characteristics of endotracheal tubes designed especially for the pediatric population are as follows: 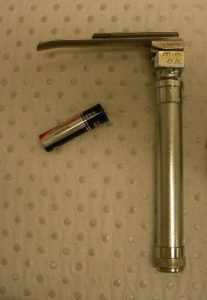 The laryngoscope modifications to suit the pediatric community are as follows:

Special devices have been built for children. They are as follows:

State of the art technological advances in pediatric anesthesia include:

Other Considerations for Children

Anesthesiologists providing care to premature babies, children requiring cardiac surgery, neurosurgery, burn surgery, thoracic surgery, or other specialized and high-risk procedures should have completed a pediatric anesthesia fellowship in addition to normal specialty training. There are unique concerns in the pediatric population. Some of the more eminent ones are discussed below.

Temperature regulation in children is a crucial aspect of pediatric anesthesia. Children are prone to hypothermia. Because of their relatively larger body surface in relation to their body mass, they lose heat much more rapidly than adults; hence, it is very important to maintain normal body temperature in the OR and recovery room.

A few prominent reasons for this predisposition include:

It is very easy to overload a child, so care with IV fluids and blood products is critical.
Based on the child’s weight, maintenance fluid can be estimated as follows:

The optimum maintenance fluids for children are D5LR, D5 with 1/2 NS, and D5 with 1/4NS.
One must calculate the preoperative deficit and replace the same using the following protocol:

One must remember to add an additional 2cc/kg/hr for minor surgeries. Additional maintenance fluid requirements can escalate up to 10 cc/kg/ hr in case of major surgeries. The amounts must be customized accordingly.

Blood loss in surgery is inevitable most of the time.

Pediatric anesthesia requires calculating the patient’s approximate blood volume, subsequent estimated allowable loss, and consequent calculation of replacement to be given. The total blood volume in children can be estimated as follows:

In the pediatric population, blood loss replacement protocols are largely based on institutional practice and experience. A rough algorithm is as follows:

After initial replacement with 3*BSS or 1*colloid; blood products are used in the following formulations:

Fluid overload in a child can manifest as pulmonary edema, circulatory overload, or coagulation abnormalities. In certain circumstances, such as cardiothoracic surgeries, invasive monitoring is essential, which requires expertise and caution. A central venous line, with frequent cannulation of the IJV or femoral vein, is used. The arterial line is most often cited in the right radial artery.

Earlier beliefs that neonates cannot experience pain have been proven false. Pain management is of equal significance in the pediatric population when compared to adults. Pain management must be customized to the child’s personality, size, and condition.
Various modalities of pain management available for children are summarized as follows:

A special mention of any co-morbid illnesses: recent infections such as upper respiratory tract infection (URTI), however trivial, should be documented. A preoperative workup should be elaborate enough to help the anesthetist anticipate any specific difficulties that may be encountered during the procedure.

Just adequate optimum starvation is advocated. A simple algorithm is as follows:

Separation anxiety is inevitable in children. The same can be alleviated with anxiolysis and premedications. Some ORs permit parental presence until induction.
Needle phobia is common in children, so inhalation induction is more common.

Intravenous access is challenging secondary to the presence of small veins and subcutaneous fat. Multiple sticks are discouraged.

Immature and underdeveloped drug scavenging systems in the pediatric population predispose them to adverse effects secondary to the use of anesthetic agents.

Children generally require larger doses of induction drugs and maintenance drugs than adults. Meticulous calculation of drug dosages is obligatory. In emergent circumstances, one can estimate a child’s weight using the following formulation:

Inhalation induction is rapid, and neonates’ and infants’ blood pressure is more sensitive to the hemodynamic effects of volatile agents. Of record, opioids are more potent in neonates, with escalated sensitivity to respiratory centers. Neuromuscular blockers demonstrate shorter circulation time.

One must exercise caution against overdose. Two of the important anesthesia drug-related etiologies prevalent in the pediatric community are:

Propofol infusion syndrome is more prevalent in the pediatric population. It can occur following 90 mcg/kg/min administration for as little as 8 hours. Manifestations include:

Malignant hyperthermia is characterized by an acute hypermetabolic state in muscle tissue. The incidence of malignant hyperthermia in the pediatric population is estimated to be approximately 1:15,000 as opposed to 1:40,000 in adults. Familial predisposition and increased incidence in certain syndromes, like muscular dystrophies, exist. Succinylcholine and volatile agents are often triggering factors.

Manifestations include tachycardia, hyperkalemia, and dysrhythmias. The specific sign is the rapid rise in EtCO2. Contrary to expectations, a rapid increase in body temperature is a rather late sign.

Treatment options are immediate discontinuation of the triggering agents, Dantrolene administration, cooling the patient, and other supportive symptomatic treatment as needed.