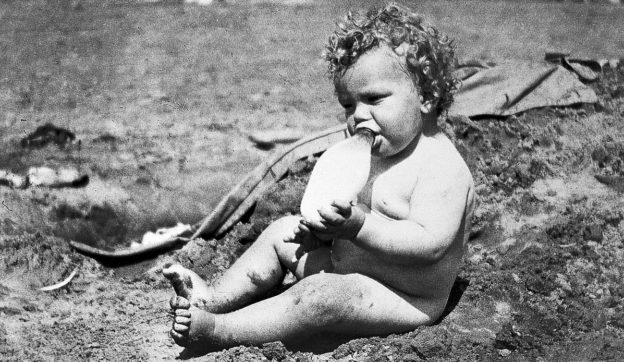 Pediatric allergic proctocolitis (PAP) is a non-IgE mediated food allergic disorder, where cell-mediated immunity plays the key role. It is one cause of hematochezia in infancy, which occurs between the ages of 1 day to 3 months. It is considered a frequent and significant cause of colitis in infants and usually resolves by the age of 1 year.

Significant positive personal and family history for atopies and allergies is often documented. The child is often sick; about 15% go into shock, and a significant subset present with moderate failure to thrive and anemia. Methemoglobinemia, academia, and acute hypoalbuminemia mark FPIES.

Treatment typically begins by eliminating the trigger protein from the diet. Casein hydrolysate is often administered. Symptoms resolve within 3-10 days after eliminating the culprit molecule. CM allergies naturally regress by about 2 years of age.

Enteropathy presents in children up to 2 years of age. The most commonly implicated protein molecules are CM and soy. Breast milk is the source of these culprit compounds. The clinical picture involves moderate diarrhea, intermittent vomiting, and moderate edema. Rectal bleeding may occur on rare occasions. Moderate hypoalbuminemia is the only laboratory marker. Allergy evaluation is remarkable for being normal. The treatment involves eliminating the culprit protein.

With an allergic reaction to wheat protein, celiac disease etiopathogenesis is well documented in the literature.

This is a rare disorder, caused by hypersensitivity to CM, which is characterized by pulmonary hemosiderosis, digestive bleeding, anemia, and failure to thrive. It improves after eliminating CM from the diet.

This presents until the age of about 20 months. CM-based formula feeds lead to this entity. Symptoms are minimal, and laboratory and allergic evaluation results are usually normal. Treatment includes eliminating whole CM protein from the diet and introducing CM-based formulas. Most children are in remission by 3 years of age.

PAP is estimated to be responsible for about 15-60% of rectal bleeding cases in infants. In most cases, infants appear to be well apart from blood in the stool. Associated eczema is seen in about 22% of patients, while up to 25% have a positive family history of allergies.

Maternal ingestion of the food allergen, commonly CM, subsequently transferred in babies through breast milk as an immunologically prone form. Formula-fed infants demonstrate an allergy to CM and soy proteins.

These immunomodulatory molecules cause a subsequent induction of mast cell degranulation, vagal muscarinic M2 receptor dysregulation, smooth muscle contraction, and stimulation of chloride secretion from the colonic epithelium. They also culminate in gastric dysmotility. These mechanisms are thought to contribute to mucosal eosinophilic infiltration in PAP pathogenesis.

Signs and symptoms of PAP are summarized as follows:

Diagnosis is based on the following salient features of PAP:

There are various ancillary tests that one may use to supplement the clinical diagnosis and rule out other closely associated differentials. A summary of the same is presented below:

Pediatric allergic proctocolitis is deceptively alarming and seemingly an annihilating disease of infants with rectal bleeding. It is a benign, transient disease and has a very manageable course.

Dietary restriction and elimination of the offending protein molecule from the maternal diet for breastfeeding mothers is a definitive, curative, and complete treatment for PAP. Lake proposed discontinuing breast milk and using casein hydrolysate formula for about 72 hours or until resolution of bleeding, whichever occurs earlier.

Soy proteins are best avoided as there is a cross-reaction to soy in about 40% of children with allergy to CM. Few children require amino acid-based formulas.

Once remission sets in, food introduction is done at home in a progressive, increasingly graded manner. Full feeds are typically reached at the end of two weeks.

The long-term prognosis is excellent. Almost one-fifth of babies demonstrate spontaneous regression of rectal bleeding. Many develop a tolerance to the offending protein by one year of age. These children are essentially normal, with no increased predisposition to future grave gastrointestinal diseases.

Prognosis is considered excellent; most infants can tolerate soy products and CM by the age of 1 year.

PAP is an important cause of rectal bleeding and the frequent etiology behind colitis in infants below one year of age.

Although seemingly alarming, with streaks of blood accompanying stools, PAP has a benign and transient course.

The child is well preserved and has no signs of failure to thrive. Food allergy tests are negative. Diagnosis is based on clinical acumen, often supplemented by tests meant to rule out close differentials.

Treatment consists of eliminating the offending molecule from the maternal diet for breastfed infants. Casein hydrolysate, hypoallergenic formula feeds, and amino acid-based formulas may also be used. Reintroduction of foods is typically done in a progressive, graded manner, reaching full feeds at about 2 weeks.

Excellent prognoses are implied for these patients, with many undergoing spontaneous resolution. Long-term increased predisposition to chronic, inflammatory gastrointestinal disorders is a myth.

One thought on “Pediatric Allergic Proctocolitis”