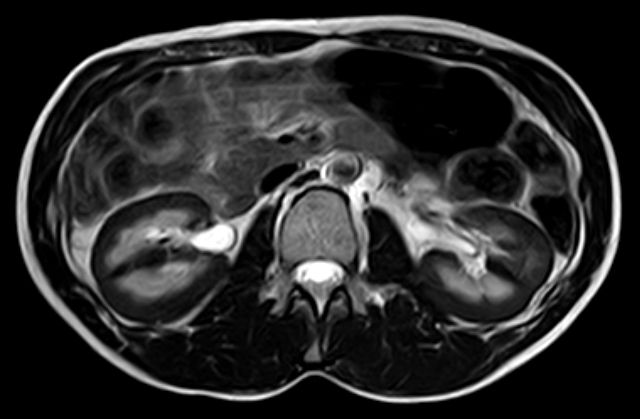 Image: “MRI: Low signal illustration of the kidneys due to iron deposits as Marchiafava syndrome” by Hellerhoff. License: CC BY-SA 3.0

Paroxysmal nocturnal hemoglobinuria typically presents in males and females in early adulthood and manifests throughout. It has an incidence of 10 cases per million with a 50 % mortality rate.

PNH is an acquired defect in the myeloid stem cells with a mutation in the PIG-A gene located in the stem cells of the bone marrow. With a PIG mutation, affected red blood cells are known as „PNH RBCs.“ The PNH RBCs lack the shield of proteins that protect normal red blood cells from the complement system. This is all due to a deficiency in glycosylphosphatidylinositol (GPI). GPI have linked proteins on RBCs, neutrophils, and platelets. If absent it renders cells susceptible to destruction.

Pathophysiology and Pathogenesis of PNH

The predisposing factor in anyone with PNH is the inability to synthesize GPI. GPI is located on the X chromosome, rendering only one mutation necessary to eliminate the expression of GPI-linked proteins. One essential GPI-membrane-linked protein is a decay-accelerating factor (DAF). This protein interacts with complement proteins to neutralize the complement attached to RBCs, neutrophils, and platelets. In the absence of this protein, RBCs are susceptible to complement-mediated intravascular hemolysis. The destruction of RBC membranes by the complement releases hemoglobin into the bloodstream and circulation.

The body has a certain threshold in which it can degrade plasma hemoglobin. However, once levels are reached, any extra hemoglobin leads to increased heme in the urine and plasma. This sequelae leads to further pathologies as increased hemoglobin levels deplete nitric oxide levels in circulation. Nitric oxide is needed for vasodilation, smooth muscle relaxation, and vascular homeostasis. Decreased levels of nitric oxide lead to vasoconstriction, smooth muscle contractions, and spasms.

When it comes to mortality and morbidity, PNH, unfortunately, has a high incidence of almost 50 %. This is due to the pathophysiology of thrombosis, secondary to PNH. Hemolysis increases the number of thrombotic events, which, when logged in multiple organs, increases organ failure and insufficiency. Thrombotic events are also due to hypercoagulable states induced by free hemoglobin in the bloodstream.

Paroxysmal nocturnal hemoglobinuria is named due to episodic (paroxysmal) hemolysis occurring usually at night due to acidotic activation. It is believed that mild respiratory acidosis develops with shallow breathing during sleep. This activates the complement mechanism leading to RBC, WBC and platelet lysis. This lysis leads to hemoglobinemia and hemoglobinuria in the morning.

Associated with a plethora of clinical findings, PNH is usually symptomatic, with a small percentage being asymptomatic. The first classic sign of PNH is hemolysis due to red blood cell lysis. This leads to symptoms like fatigue, jaundice, and hematuria.

The side effects of hemolysis can be broken down by different manifestations in the body’s organs and pathways. Renal insufficiency arises due to intravascular hemolysis in PNH. Toxicity increases due to direct free heme in the kidney. Chronic hemolysis increases renal iron deposition leading to cortical scarring and infarcts.

The most detrimental complication with PNH is thrombosis. It is the primary cause of death in afflicted patients, occurring in over 40 % of the individuals. Thrombi may lodge in the venous or arterial system, such as hepatic, portal or cerebral veins, causing cirrhosis, splenic congestion, and cerebral strokes, respectively. Symptoms may be insidious as clots aren’t found immediately. Skin necrosis, vein thrombosis, and pulmonary embolisms are some of the most frequent symptoms. Some clots are found incidentally, and unfortunately, many go undetected leading to increased mortality.

Several laboratory measures are used to detect PNH. Typically, an evaluation consists of testing the patient for hemolytic anemia and to rule out other causes of hemolysis. This includes autoimmune pathologies or injuries. Most commonly performed tests are:

Flow cytometry (Image 3) is the most specific test used to confirm PNH. Patients at risk for PNH, aplastic anemia, or myelodysplastic disorder patients, are screened yearly to monitor the development of subclinical PNH. The patient’s blood is incubated with tagged fluorescent antibodies that bind to GPI-linked proteins. The most commonly used antibodies are Fluorescent AERolysin (FLAER). This state-of-the-art laboratory test sends the patient’s blood for flow cytometry to detect CD59 (MIRL), a glycoprotein, and CD55 (DAF), in the regulation of complement action. Absence or reduced expression of both CD59 and CD55 on PNH RBCs is
diagnostic. 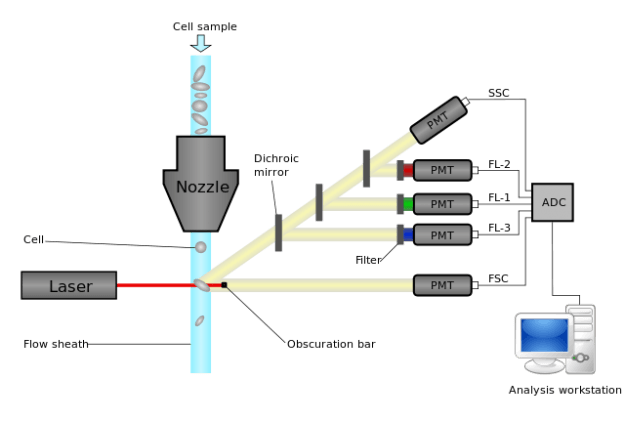 Image 3: “Schematic of a flow cytometer, from sheath focusing to data acquisition.” by Kierano. License: CC BY 3.0

A second diagnostic test would be the sugar water or sucrose lysis test. This test uses the ionic strength of serum that is reduced by adding an iso-osmotic solution of sucrose, which then activates the classic complement pathway, and complement-sensitive cells are lysed.

Therapy aimed at treating PNH is focused on targeting the underlying hemolytic defect and monitoring for progression. Patients with PNH have yearly screens for increased or decreased PNH clone sizes. As of now, the only therapies for classic PNH include hematopoietic cell transplantation (HCT) or complement inhibition with medications such as eculizumab. Those with multiple thrombi are treated with anticoagulation therapeutics. Iron supplementation is used for iron-deficient patients, in conjunction with folate. Those with bone marrow failures, or malignancies, are treated with immunosuppressive therapy and weekly WBC monitoring.

Opioids and analgesics are used for those suffering from smooth muscle dystonia and spasms. Women suffering from PNH who are interested in pregnancy pose a risk of increased maternal and fetal morbidity and mortality. Therefore, strict iron and folate supplementation, along with transfusions, may be needed during pregnancy.

Overall, paroxysmal nocturnal hemoglobinuria (PNH) is a rare, but life-threatening, disorder. Unexplained hemolytic anemia, thrombi, and hematuria all lead to a painful increase in mortality. All patients should have a baseline testing which should continue annually thereafter. Management may be aggressive or mild depending on symptoms and severity. Overall, there is no cure for PNH at the moment, but management and research are being done to help treat this hemolytic disease.

1. A 26-year-old male comes into the clinic for lab work due to suspected PNH. Past medical history shows the recent onset of labored breathing, stomach pains, and neuropathies. After diagnostic, his lab results would read all of the following, except?

2. A 56-year-old female comes into the hospital for hemolytic anemia, red urine and difficulty breathing. She was diagnosed with paroxysmal nocturnal hemoglobinuria. Red blood cells in PNH patients are sensitive to which of the following?

Which is the next best step in diagnosing the suspected condition?