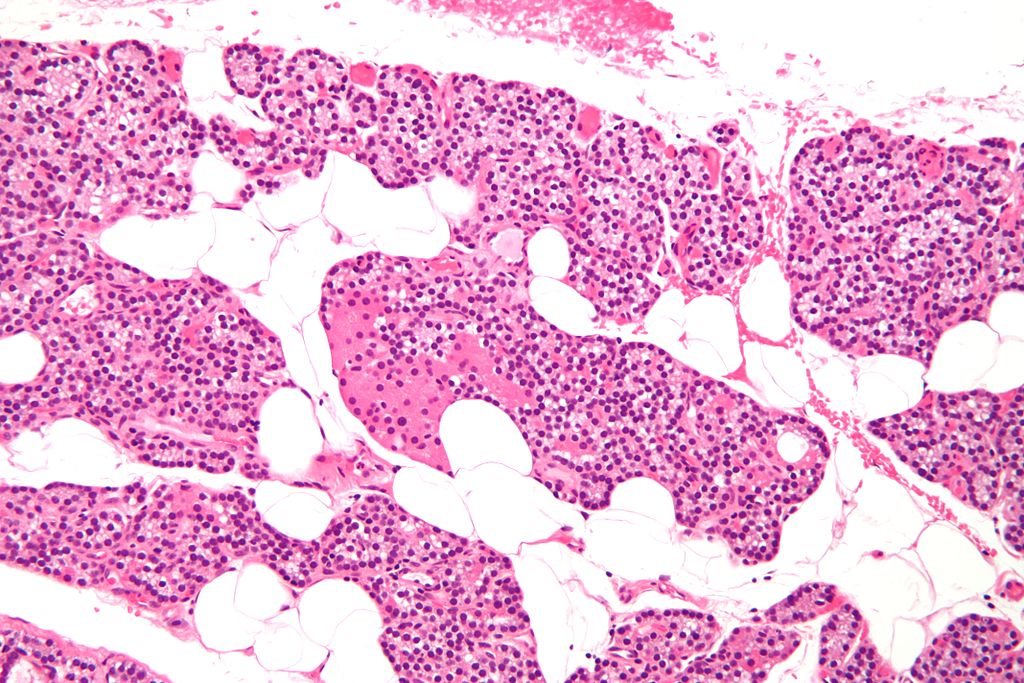 Image: “Intermediate magnification micrograph of the parathyroid gland” by Nephron. License: CC BY 3.0

Function of the Parathyroid Hormone 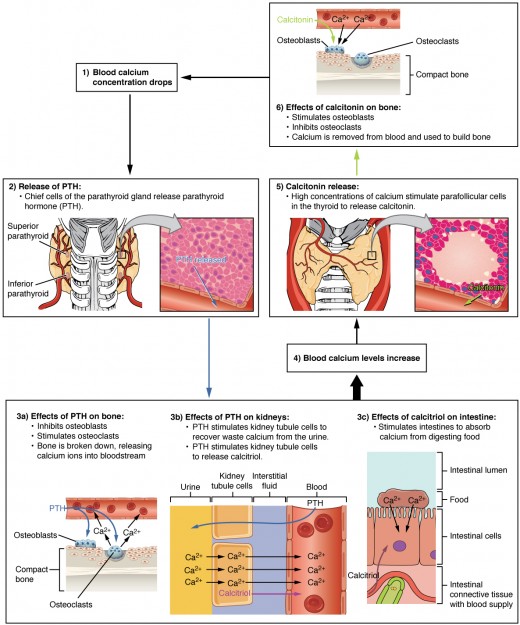 The parathyroid hormone is synthesized by the parathyroid gland as a polypeptide consisting of 84 amino acids, with a relatively short half-life of approximately 5 min. Its effects on kidneys and bones are mediated via stimulation of the adenylyl cyclase.

In the kidneys, the parathyroid hormone increases the secretion of phosphate and the resorption of calcium. The decreased phosphate levels stimulate the renal 1-α-hydroxylase to increase the synthesis of the biologically active form of vitamin D (calcitriol). Calcitriol, in turn, stimulates enteral calcium resorption.

N.B. The parathyroid hormone increases the calcium levels and decreases the phosphate levels in the blood.

The secretion of the parathyroid hormone thus leads to increased calcium levels, and higher concentrations are released at lower levels of calcium (< 1.25 mmol/L). Calcitriol deficiency, as well as high phosphate concentrations, are some of the other factors underlying elevated PTH secretion.

Malignant diseases of the epithelial cells very rarely contribute to primary hyperparathyroidism (less than 1%). Multiple endocrine neoplasia (MEN) is another rare cause. 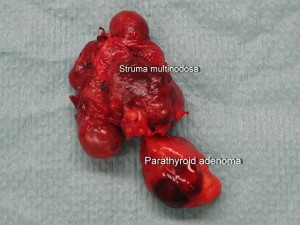 Due to the effect of PTH on the target structures including kidneys and bones (see above), elevated PTH levels increase the calcium levels as well as decrease the serum phosphate levels.

More than 50% of patients with primary hyperparathyroidism are asymptomatic or only exhibit non-specific symptoms.

Clinical manifestations of primary hyperparathyroidism are typically restricted to kidneys, bones, and the gastrointestinal tract. Therefore, the classic triad of symptoms is also summarized as ‘stones, bones, and abdominal groans’.

Nephrolithiasis is the most common renal manifestation of primary hyperparathyroidism, resulting in the formation of calcium phosphate or calcium oxalate stones. Occasionally, it results in nephrocalcinosis with a highly unfavorable prognosis. 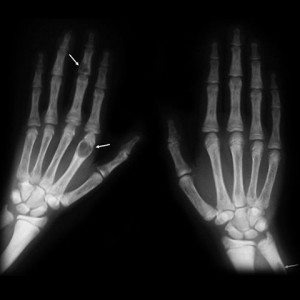 Image: Brown tumors of the hands in a patient with hyperparathyroidism. By Frank Gaillard, License: CC BY 3.0

The increased osteoclast activity and the resulting increased calcium release leads to osteopenia and subperiosteal resorption lacunae as well as osteolysis of hands and feet. In part, this pathophysiology may lead to bleeding into the resorption cysts, which are then referred to as ‘brown tumors’ (osteitis fibrosa cystica, osteodystrophy cystica generalisata, or von Recklinghausen’s disease).

A range of non-specific gastrointestinal symptoms may include obstipation, meteorism, nausea, loss of appetite, and weight loss. Other more uncommon manifestations include stomach and duodenal ulcers as well as pancreatitis.

N.B. The combination of calcium with fatty acids released may lead to the development of lime soap resulting in lower calcium levels, which can disguise as possible primary hyperparathyroidism causing pancreatitis.

Aside from the 3 primary manifestations of primary hyperparathyroidism, increased calcium levels may lead to neuromuscular as well as psychiatric symptoms. The neuromuscular symptoms include general muscle weakness, rapid muscle fatigue as well as changes in ECG readings, i.e., shortened QT time.

Depression is the most common psychiatric manifestation.

Laboratory diagnosis should be specifically highlighted. According to the definition, hyperparathyroidism is accompanied by elevated PTH values. In addition, elevated serum calcium levels (> 2.6 mmoL/L) are found.

In a few cases, primary hyperparathyroidism may occur despite normal serum calcium levels, for instance, in patients diagnosed with concomitant deficiency of vitamin D (especially in the winter months) and albumin as well as kidney insufficiency.

Other laboratory parameters, which may point toward primary hyperparathyroidism, are lower serum phosphate concentrations as well as an increase in alkaline phosphatase. The secretion of hydroxyproline and phosphate in urine may be increased as well.

Imaging modalities such as sonography, CT, MRT as well as 99mTc-MIBI (metoxyisobutylisonitrile scintigraphy) may be used to detect localized changes. 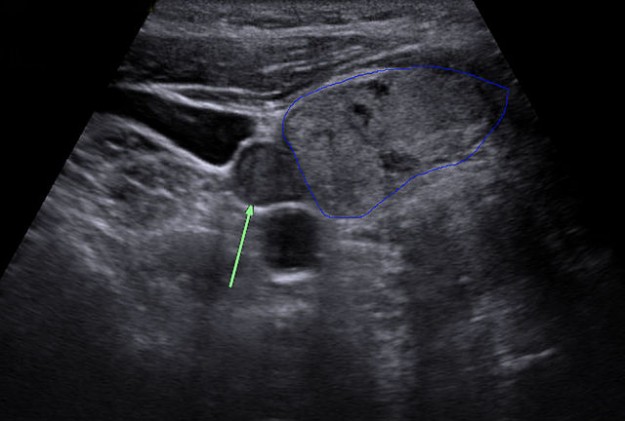 Image: Parathyroid adenoma in sonography. Well-defined, rounded to the ovoid formation (arrow ) next to the thyroid lobes (blue border). By Hellerhoff, License: CC BY 3.0

Other causes include increased vitamin D levels, i.e., due to intoxication or sarcoidosis.

During surgery, the solitary adenoma is removed; however, in the case of hyperplasia of the epithelial cells, a total parathyroidectomy with simultaneous transplantation of the remains of the parathyroid tissue into the forearm is performed. The transplantation of the remaining tissue into the brachialis muscle (m. brachioradialis) facilitates easy surgical access, as needed.

The short half-life of PTH ensures a successful surgical outcome, with levels decreased by approximately 50% compared with the initial stage. In the days following surgery, the calcium levels, in particular, must be closely monitored for signs of hypocalcemia, for instance, Chvostek’s and Trousseau’s signs.

If surgery is contraindicated, conservative therapy is initiated using symptomatic measures such as sufficient fluid intake or osteoporosis prophylaxis with bisphosphonates in postmenopausal women.

The increased PTH levels in secondary hyperparathyroidism are not caused by the parathyroid glands.

The pathophysiology of renal secondary hyperparathyroidism is based on diminished calcitriol synthesis due to renal insufficiency. The low calcitriol levels, in turn, have a stimulating effect on PTH secretion. However, in cases of renal insufficiency, calcium resorption and phosphate secretion are inhibited. Both factors also induce PTH release.

Treatment is targeted at the underlying diseases contributing to secondary hyperparathyroidism.

Treatment is tailored and individualized depending on the underlying disease, supported by calcitriol or calcium substitution.

In the case of hypoparathyroidism, the PTH levels are reduced due to the poor function of the parathyroid glands.

Idiopathic hypoparathyroidism or aplasia of the parathyroid glands is rare, i.e., in cases of DiGeorge syndrome.

Calcium deficiency and the resulting increase in neuromuscular excitability may manifest as a series of neuromuscular symptoms including hypocalcemic tetany, which is characterized by muscle cramps, muscle spasms in hands (claw), or paresthesia. For instance, abdominal pains may be triggered by contractions of the visceral musculature in the gastrointestinal tract.

Other clinical signs for hypocalcemia are Chvostek’s and Trousseau’s signs. In the case of positive Chvostek’s sign, tapping on the facial nerve (m. facialis) in the area of the cheek results in the twitching of the oral musculature.

In the case of positive Trousseau’s sign, however, a couple of minutes after the application of blood pressure cuff and inflation to a pressure greater than the systolic pressure, muscle spasms of the hand are induced, the so-called claw. Here, the thumb is withdrawn into the palm.

Prolongation of the QT interval (electrocardiogram) is another neuromuscular sign of hypoparathyroidism.

Aside from neuromuscular signs and symptoms, psychiatric changes such as depression, psychotic disorder, or dementia may occur as well. These symptoms are attributed to calcification of the basal ganglia (Fahr’s syndrome), which occurs in approximately 50% of patients diagnosed with hypoparathyroidism. 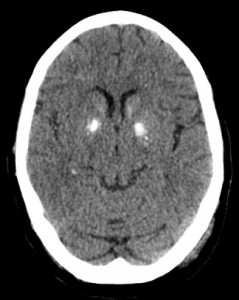 Other organic changes are, for instance, disturbances in hair and nail growth as well as tetanic cataracts, which lead to paradoxical intraocular lens calcification, probably resulting from fluctuating hyperphosphatemia with simultaneous low calcium levels.

Hypoparathyroidism can also trigger osteosclerosis and osteoporosis, suggesting that the overall bone-related findings are not conducive to a diagnosis of hypoparathyroidism.

The symptoms of pseudohypoparathyroidism are attributed to abnormal PTH receptor or subsequent signaling cascade.

Differential diagnosis of hypoparathyroidism includes decreased levels of ionized calcium in cases of alkalosis, which can also lead to clinical manifestations of tetany despite normal serum calcium levels. Alkalosis represents the most common cause of tetany, and respiratory alkalosis involves acid-base imbalance caused by alveolar hyperventilation.

Treatment of long-term hypoparathyroidism involves substituting vitamin D and calcium, and monitoring of serum calcium levels on a regular basis in order to prevent hypercalcemia and nephrocalcinosis. Additional phosphate binders may be indicated if the serum phosphate levels do not decline adequately during therapy.

Tetany is an indication for intravenous injection of 10% calcium glucose. Patients undergoing digitalis treatment may not absorb intravenous calcium due to the synergistic effect between calcium and digitalis, which must be ruled out before administration.