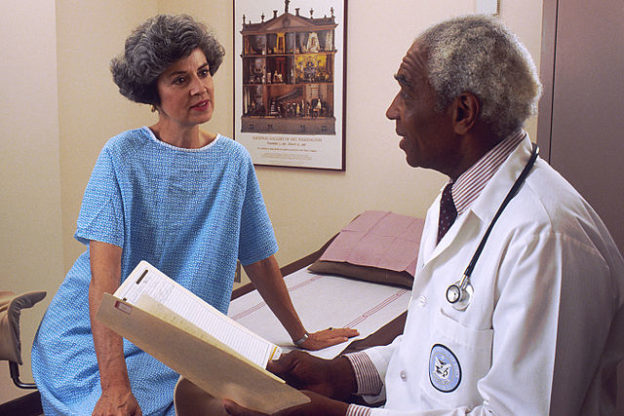 Cellular pathology is a branch of pathology that entails the study of cellular injury, cell adaptation, cell aging, and cell death.

It is also a branch of clinical care that deals with the examination of tissues and organs from patients for their histological diagnosis. The tissues are mainly examined for abnormal features that mainly represent carcinogenesis, but additional non-carcinogenic findings of various cellular characteristics are also documented.

The procedure begins with obtaining the specimen from the patient via a consented procedure such as surgery in an operating theatre, a simple procedure in an outpatient clinic and endoscopy samples or tissues. The obtained specimens are then stored in preserving solutions, such as paraffin and formalin, to avoid degeneration, destruction, or loss of specimen quality.

Thin slices of up to 0.004 mm in thickness are made from the tissues which are later fixed on microscope slides, stained, and observed under a microscope for features of carcinogenesis. Additional characteristics of stain uptake depending on the present molecular markers are also assessed to characterize the pathology further. 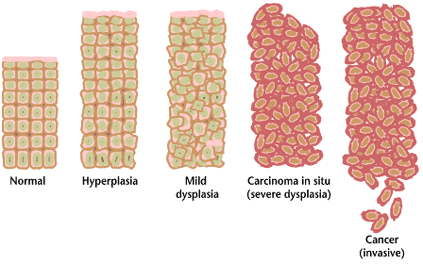 The common findings of histopathological reports are features that show the inability of the cell to adapt to cellular injury (DNA damage) and other cancer-causing changes. The findings may also represent various stages of cell adaptation:

Also known as tumorigenesis which stands for the process of transforming a normal cell into a cancerous cell. Strictly defined carcinogenesis represents the initiation of a tumor-forming process while oncogenesis represents the maintenance of the tumorous state in cells that have already changed into a cancerous state. The process is largely dependent on the imbalance between proliferation and programmed cell death (apoptosis) in the cell division pattern.

The process is influenced by a variety of risk factors that are considered etiological factors of cancer. They are known as carcinogens and they exert their effects by one of the two methods:

Primary determining factors that work to initiate DNA mutation/damage that kicks off the tumor-forming process. These are the molecular etiologies of cancer which are radiation, carcinogenic viruses, chemicals such as asbestos and tar, hormonal influence, lifestyle changes such as smoking, alcohol intake and sun exposure, and immunologic factors.

Secondary determining factors which represent the genetic transformation that increases the risk of developing cancer. This has been observed in hereditary tumors such as retinoblastoma and nephroblastoma.

Favoring factors which are risk factors that have been associated with an increased incidence of malignant tumors such as geographical distribution, nutrition, age, and sex. These factors affect the function of various genes and lead to the formation of abnormal genes that are central to the formation of a tumor.

Proto-oncogenes are genes that control the normal cell division. They are targeted by carcinogenic toxins for induction of mutations that may arise from viruses, chemicals, and spontaneous mutations.

Upon sustaining various mutations, proto-oncogenes become oncogenes which are the tumor-causing genes due to their uncontrollable cell division properties. Examples of oncogenes include the K-ras gene found in colon cancer.

DNA mismatch repair genes are thought to be found in tumor cells thus giving them some level of risk to spontaneous mutations. They are easily triggered by mutation by carcinogenic materials.

It puts forward that carcinogenesis is a protracted process involving various stages that begin with damage to cellular DNA and comptonization of the cells ability to repair this damage. These interventions require a lot of time to take effect and hence the long latency period for cancer formation before the tumor is clinically evident.

This is the stage where there is the interaction of a normal cell with a carcinogen to induce genetic mutation/DNA damage. This damage can be repaired or reproduced by the cell division mechanisms. The most common outcome at this stage is repaired by the body and thus this step rarely leads to malignancy more so if the injury is the first attempt. However, if the body fails to repair the damage, the body continues reproducing the error/damage and this leads to more errors/damage and eventually cancerous states. Genotoxic factors such as viruses, radiation, and chemicals (asbestos) initiate this process.

Here, the cells with chronic genetic mutations lead to the autonomic production of the cells leading to a faster division of already mutated cells. This leads to further spread of the already damaged DNA. The substances that accelerate this process are known as promoters. They may be non-carcinogenic or weakly carcinogenic but rely on the damage caused by initiating carcinogens. Unlike initiating carcinogens that work by binding to DNA, promoters work by binding to cell membranes. Examples of promoters include tar in cigarette smoke, alcohol, and carcinogenic hormones. The rapid division of the affected cells leads to accumulation and formation of a benign mass. The process is still reversible by removal of the carcinogenic triggers and removal of the tumorous cells.

This refers to a stage where the abnormal cells exceed the normal cells in the pathogenic region. The cells are prone to more damage that increases the damage and rate of cell division paving a way to the next stage of carcinogenesis.

The last stage where the tumor acquires invasive and metastatic properties causing damage and symptoms consistent with cancer.

It holds that mutations arise from structural abnormalities of genes regulating cell division. The mutations are then carried down to daughter cells leading to initiation of the cancer formation process. The theory is supported by the fact that most genetic diseases pose an increased risk of developing cancer. For example, patients with Down’s syndrome and Klinefelter’s syndrome have an increased risk of developing leukemia. Moreover, most tumors have an incriminated genetic mutation that is pathognomonic of the disease such as retinoblastoma and nephroblastoma.

It puts forward that cancer emanates from functional disorders of genetic mutation with no structural changes seen. This theory is supported by laboratory demonstration that incubation of cancer cells in an environment with cells free of cancer leads to reversal of the tumorigenesis; thus, this theory views cancer as an epigenetic and reversible process influenced by nearby situations.

Viral oncogenes are thought to be solely responsible for triggering the oncogenesis. They induce carcinogenesis by interaction and damage of the cellular DNA.

It views carcinogenesis as a mere increase in the rate of cell division and downplays the presence or the impact of genetic mutations in oncogenesis.

These are disorders that occur because of an immunologic response to the presence of a neoplasm in the body. They are also described as clinical syndromes that arise from substances produced by the tumor and not by a direct effect of the tumor such as metastasis, mass effects or invasiveness of the tumor.

In most situations, the link between the tumor and the paraneoplastic syndrome is not well understood, but it is thought to arise from hormones, peptides or cytokines produced by the tumor such as ACTH and ADH.

With the occurrence of tumor cells, the body tries to fight against it to destroy it by the production of antibodies as an immune response. These antibodies cross-react with normal body tissues that possess similar proteins as the tumor cells leading to the development of a paraneoplastic syndrome. Another theory for the pathogenesis of the syndromes is from the hormones produced by the tumor, such as a posterior pituitary tumor secreting an antidiuretic hormone that is meant to produce interference with the normal body mechanisms. These hormones are known as tumor markers that are diagnostic of the disease.

Paraneoplastic syndromes are classified into various systemic syndromes that have varying symptoms as follows:

They include syndrome of inappropriate ADH secretion that is evident in small cell lung cancer and central nervous system malignancies. Their symptoms are hyponatremia, hypokalemia, headaches, weakness, and altered mental status.

Cushing syndrome is seen in pancreatic carcinoma and thymoma. It may be present with hypokalemia. Its symptoms are moon facies, truncal obesity, and gynecomastia. Hypercalcemia is seen in the lung, breast, and renal carcinoma.

Carcinoid syndrome is evident with the secretion of serotonin and bradykinin in cancer of the bronchus.

Treatment of the tumor causing the paraneoplastic syndrome

Treatment of the paraneoplastic syndrome

Plasma exchange to separate blood cells from the fluid part of blood and reduce the immune components. Intravenous immunoglobulin (IVIg). Immunoglobulin contains healthy antibodies from blood donors. High doses of immunoglobulin speed up the destruction of the damaging antibodies in your blood.

Supportive treatment of other complications or slowing the progress of the paraneoplastic syndrome:

As every individual exhibit different paraneoplastic syndromes from others, so prognosis also varies to a great extent. Course and prognosis also vary with each paraneoplastic syndrome;  disseminated intravascular coagulation do not resolve easily whereas hypertrophic osteoarthropathy shows good results with medications. Some of the paraneoplastic disorders may get settled spontaneously.  Mortality is mainly marked due to comorbidities such as chronic heart failure and tumor burden itself or kidney failure.