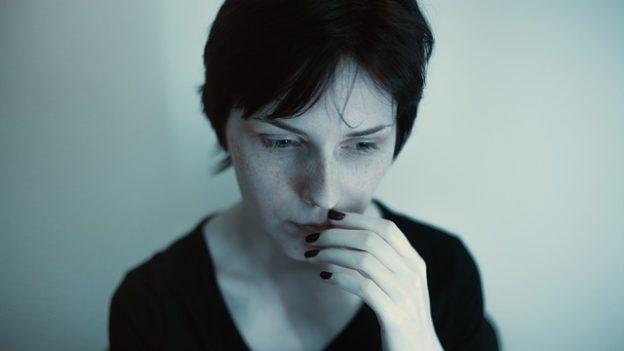 A panic attack is not a mental disorder. It is a discrete period of heightened anxiety that affect much of the general population. Panic disorder is characterized by the experience of panic attacks accompanied by a persistent fear of having additional attacks.

Definition of a panic attack

A panic attack is defined as an abrupt surge of intense fear that reaches an apex within minutes, during which time four or more of the following 13 symptoms occur:

Note: The abrupt surge of intense fear can occur from a calm state or an anxious state.

Agoraphobia: Agoraphobia occurs commonly with panic disorder. It is defined as the fear or avoidance of places from which escape would be difficult if panic symptoms occur. Such places include public places, public transportation, crowded places, or being outside alone. Agoraphobia is more common in women. It often leads to severe restrictions on the individual’s travel and daily routine.

The pathogenesis of the panic disorder is a combination of an underlying predisposition (probably genetics making the patient have a sympathetic nervous system over-activity, increased muscle tension, and hyperventilation) interacting with or triggered by life stress (e.g., separations during childhood or interpersonal loss in adulthood). Many patients with panic disorder have panic symptoms in response to ‘panicogens’ (lactate carbon dioxide, caffeine, and other substances).

There are differences in the brains of those with panic disorders. Many intricate neuronal pathways and various areas of the brain are involved. Specific receptors and neurotransmitters are altered.

A proposed neuroanatomical model for panic disorder focused on specific areas in the amygdala or hypothalamus as potential sites of neural triggers for panic attacks. This suggests that individuals may inherit specifically hyperexcitable areas. Yet another theory suggests that exposure to internal or external stressors lights up the excitable parts of the brain.

Their involvement suggests that the human panic response is more complex and involves a broad set of neural circuits and processes.

Alterations in the GABA-benzodiazepine receptor and serotonin receptor systems show that panic disorder patients have increased fear of generalization.

Patients with continuing, frightening panic disorder symptoms are often dissatisfied after a negative general medical workup and repeatedly seek medical care. The diagnosis of panic disorder can take as long as 10 years.

The patient experiences recurrent panic attacks that are not triggered by a stressor. The episode is followed by one month or more of either worry about future attacks or their consequences, or a significant adaptive change in behavior because of the attacks (as described above).

The episodes are accompanied by at least four symptoms of autonomic hyperactivity, as mentioned above. Such autonomic symptoms, especially cardiorespiratory, gastrointestinal, and otoneurologic symptoms, often predominate in the patient’s clinical presentations. This causes many patients to seek health care from a general medical doctor, rather than a psychiatrist, and the dramatic and paroxysmal nature of panic may lead to more emergency room visits.

Some patients present with panic attacks but do not otherwise feel fear or anxiety, a condition known as a ‘non-fearful’ panic attack. The absence of subjectively experienced fear in some patients may make the recognition of panic attacks more difficult.

Panic disorder prevalence is increased in patients with alcohol abuse disorders and a variety of other anxiety disorders. Evidence suggests that this association is due to both self-medication as well as alcohol’s progressive anxiogenic (anxiety-causing) effect over time. Patients use alcohol or sedative hypnotics in an attempt to control panic disorder symptoms. These agents have a short anxiolytic (anxiety-ceasing) action. However, when blood levels of these agents decline, rebound exacerbation of anxiety and panic attacks occurs.

Panic disorders are usually diagnosed clinically based on the previously mentioned criteria. The following investigation modalities are typically carried out to rule out other diagnoses.

This test will rule out myocardial infarction, which might come with severe pain and feelings of panic.

This blood test will rule out hyperthyroidism, which may present with psychiatric manifestations, such as anger and panic attacks.

These blood tests will rule out metabolic derangements and drugs in the system. Some addicts may use certain drugs, such as sympathomimetics, which may cause panic attacks.

Initial treatment should include weaning the patient off anxiogenic drugs, such as caffeine and alcohol, which can cause rebound anxiety.

Relaxation techniques can be effective for mild to moderate anxiety. They include complementary techniques such as meditation and yoga. Conventional relaxation training involves slowing breathing rate, muscle relaxation, and mental imagery.

Biofeedback is useful for showing patients that they are not relaxed, even when they fail to recognize it because they have become accustomed to anxiety.

Behavior therapies are treatments meant to change behavior and thus symptoms. The most common and successful behavior therapy (with 80% success in agoraphobia) is graded exposure, otherwise known as systematic desensitization.

Firstly, the patient rates the phobia into a hierarchy or ladder of worsening fears (e.g., in agoraphobia: walking to the front door with a coat on, walking out into the garden, walking to the end of the road).

Secondly, the patient practices exposure to the least fearful stimulus until no fear is felt. The patient then moves ‘up the ladder’ of fears until they are cured.

Cognitive behavior therapy is the standard treatment for panic disorder because the therapist and patient need to identify the mental cues (thoughts and memories) that may subtly provoke exacerbations of anxiety or panic attacks. CBT also allows identification and alteration of the patient’s “schema,” or way of looking at themselves and their situation, that feeds anxiety.

Prescribed drugs used to treat anxiety can be divided into two groups:

Side effects: Side effects include sedation and memory problems. Patients should be advised not to drive while on treatment. These drugs can cause dependence and tolerance within 4–6 weeks, particularly in patients with dependent personalities. Withdrawal syndrome can occur after just three weeks of continuous use and is particularly severe when high doses have been given for a longer time. Thus, if a benzodiazepine drug is prescribed for anxiety, it should be prescribed in as low a dose as possible, preferably on an “as needed” basis, but for no more than 2–4 weeks.

Antipsychotics, such as aripiprazole or olanzapine, can be useful for more severe or refractory cases of panic disorder.

Beta-blockers are effective in reducing peripheral symptoms. Many anxiety symptoms are due to an increased or sustained release of adrenaline and noradrenaline from the adrenal medulla and sympathetic nerves.

Beta-blockers, such as propranolol, are useful for reducing peripheral symptoms, such as palpitations, tremor, and tachycardia, but they do not help central symptoms such as anxiety.

Other mental disorders such as acrophobia (fear of heights)

Symptoms of panic disorder must be distinguished from panic-like symptoms that occur as part of other mental disorders such as acrophobia.

Mitral valve prolapse also occurs in patients with panic disorder but is unlikely to cause panic symptoms. In such instances, the panic disorder should be treated.

There is evidence that panic attacks are also associated with an increased risk of mortality due to vascular causes, like stroke and coronary heart disease.

Panic disorder is also seen to worsen the course of asthma if the patient already has it.