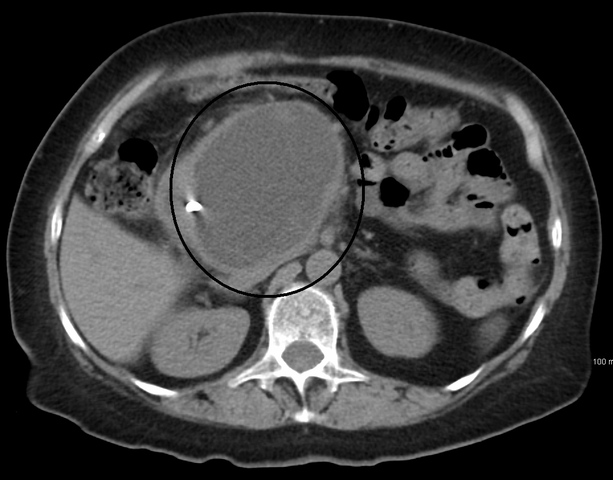 Pancreatic pseudocysts are fluid collections that may occur a few weeks after an episode of acute pancreatitis. These collections contain several pancreatic enzymes and do not have an epithelial wall.

Pancreatic pseudocysts are different from acute fluid collections that occur during the episode of acute pancreatitis, where the latter is more of an inflammatory process.

The most common etiologies for pancreatic pseudocysts are: 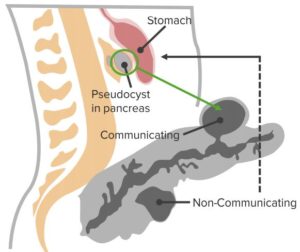 The size of these pseudocysts can range from 2 to 30 cm and they can be multiple, especially in alcoholic pancreatitis. 60% of the pseudocysts occur at the pancreatic tail, and their fluid has amylase, lipase, and trypsin.

The most commonly presented symptom of pancreatic pseudocysts is abdominal pain. There is usually a recent history of acute pancreatitis unless the etiology is abdominal trauma. Patients can also have anorexia or can complain of an abdominal mass if the pseudocyst is large enough.

Pseudocysts can become infected, and in that case, patients would present with a fever. Pleural effusion, another acute pancreatitis complication, can co-occur with pancreatic pseudocysts.

Physical examination is usually unremarkable unless the pseudocyst is large enough and can be palpated. Tenderness can be elicited in patients with pancreatic pseudocysts. If the tenderness is severe or there is abdominal rigidity, pseudocyst rupture or infection has to be excluded.
Chest examination can reveal dullness to percussion and decreased breathing sounds in the lower lung fields due to pleural effusion. Fever can be present if the pseudocyst gets infected. Jaundice has been reported as a result of sepsis caused by pancreatic pseudocyst infection.

Patients who develop a pancreatic pseudocyst can have an elevated serum amylase and lipase levels, but this is not necessary for a diagnosis. Liver enzymes and bilirubin are usually elevated in gallstone pancreatitis and related pseudocysts.

Older patients who present with a pancreatic pseudocyst, without a clear history of recent pancreatitis, should have the cyst’s fluid aspirated and examined to exclude malignancy. Carcinoembryonic antigen is elevated in pancreatic malignant cysts.

The fluid content of the pseudocyst is usually of low viscosity, and pancreatic enzymes’ levels are elevated in the fluid aspirated from the pseudocyst.

Endoscopic ultrasonography is beneficial when the pseudocyst is symptomatic and transmural drainage through the stomach wall is planned. 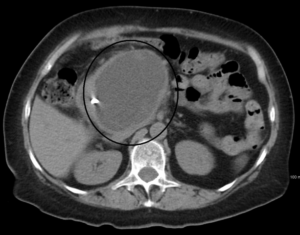 The best imaging modality to diagnose pancreatic pseudocysts is a computerized tomography (CT) scan of the abdomen. A CT scan usually reveals a cyst-like structure in the pancreas that could be single or multiple as seen in the figure. Pancreatic calcifications, a marker of pancreatitis, can also be visualized on a CT scan. Pseudocysts can erode the splenic artery and cause intra-cyst hemorrhage, which can be excluded by a CT scan.
Endoscopic retrograde cholangiopancreatography (ERCP) is used for drainage of the pseudocysts but not as a diagnostic modality. Magnetic resonance imaging (MRI) is indicated in patients with fever or sepsis to exclude necrotizing pancreatitis.

A wait–and–see approach is advisable in most cases of uncomplicated pancreatic pseudocysts as the majority of them resolve without any specific treatment. The decision to go for pseudocyst drainage should be based on the presence of symptoms and not the size of the pseudocyst.

The treatment of choice for symptomatic or infected pseudocysts, or when there is a concern about malignancy, is drainage. If drainage is planned, pancreatic pseudocyst anatomy has to be assessed, which can be achieved by either an ERCP or MRI study. If pancreatic duct strictures are identified, surgical drainage of the pseudocyst is recommended.

Larger symptomatic pseudocysts can cause abdominal pain that is related to eating fatty diets. In these patients, it is advisable to eat a low-fat diet and, if the pain is very severe, to switch to parenteral or enteral nutrition.

Patients with pancreatic duct stenosis might benefit from a stent placement, which facilitates the pseudocyst resolution. If a percutaneous drain is used, care should be taken to look for possible infection.

When the pseudocyst’s wall thickness is < 1 cm, endoscopic drainage with ERCP or transmural through the stomach can be attempted. 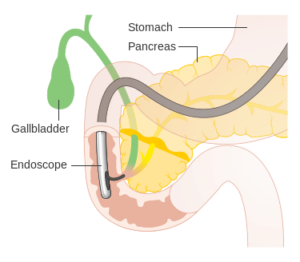 Pancreatic pseudocysts can lead to the following complications:

Surgery may be required to remove the pseudocysts if there is a possibility of them causing cancer or other serious conditions. The prognosis is usually good for the majority of patients treated from pseudocysts.