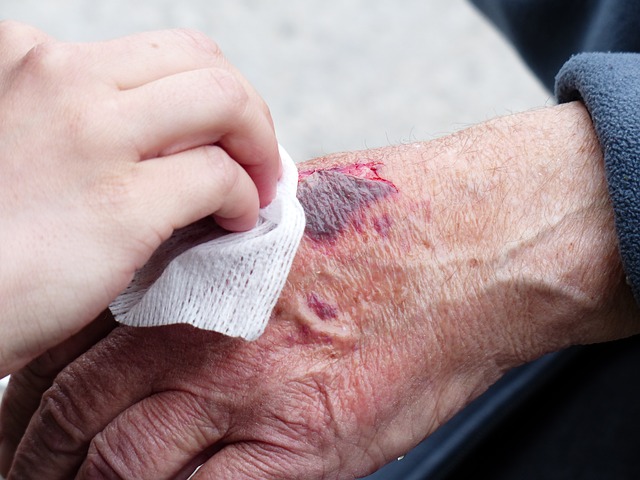 In 1986, the World Health Organization (WHO) proposed a plan for the treatment of chronic pain. It is based on the administration of oral analgesics (painkillers) according to their potency: First, weaker analgesics are used, and in the absence of the desired effect stronger analgesics are recommended. Coanalgesics (see below) can be administered at each level of pain. Initially only used to treat pain arising from tumors, they are now utilized in the treatment of other forms of chronic pain as well.

Non-opioid analgesics used to treat the 1st WHO level of pain include paracetamol (4–6 x 500–1000 mg per day), naproxen (2 x 500 mg per day), diclofenac (2 x 50–150 mg per day), and ibuprofen (2–3 x 800 mg per day). However, paracetamol is only slightly effective against bone, soft tissue and tumor pain as it is not an anti-inflammatory medication. Patients with a high risk of gastrointestinal complications are recommended proton pump inhibitors (e.g., omeprazole).

The effects and side effects of non-opioid analgesics are further discussed below.

The low-potency opioids will be discussed in detail later. In case of very severe chronic pain, or pain refractory to low-potency opioids, you should switch to pain level 3, but never combine the opioids of levels 2 and 3, which attenuates the pharmacological effect.

N.B. Level 2 and level 3 opioids must not be combined with each other!

A combination of non-opioid analgesics and high-potency opioids is recommended for the management of WHO level 3 pain. These include morphine (6 x 5–500 mg p.o. per day), hydromorphone (2–3 x 4–200 mg p.o. per day), buprenorphine (3–4 x 0.2–1.2 mg s.l. per day), fentanyl (0.6–12 mg transdermally), and oxycodone (2–3 x 10–400 mg p.o. per day). Retarded morphine is the medication of choice, whereas non-retarded morphine is primarily indicated for breakthrough or peak pain. For dysphagia, severe constipation or other intestinal absorption disorders, fentanyl or buprenorphine may also be administered as a transdermal patch (TTS = transdermal therapeutic system).

Opioids are ingested at specific incremental doses that should not be decreased; otherwise, the patient runs the risk of opioid accumulation. In the alternative, the dosage should be increased upon experiencing pain during the treatment period.

N.B. Pain treatment is performed ‘by the mouth’ (oral), ‘by the ladder’ (according to the levels of pain) or ‘by the clock’ (fixed intervals).

The effects and side effects of the high-potency opioids are discussed in the article ‘Anesthesia’.

Non-opioid analgesics are pain medications that inhibit pain without interacting with opioid receptors.

Antipyretic Analgesics as Inhibitors of Cyclooxygenases

Cyclooxygenases are key enzymes catalyzing the synthesis of arachidonic acid derivatives (eicosanoids) such as prostaglandin G2 and prostaglandin H2, which ultimately result in the formation of other prostaglandins, prostacyclins, and thromboxanes in the presence of other enzymes. Along with physiological reactions, these also mediate pathophysiological events, such as fever, inflammation, and pain. 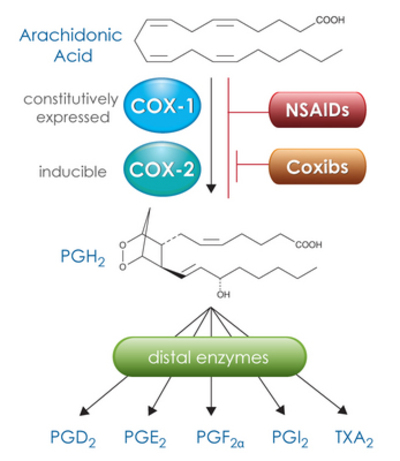 Image: COX-1 and COX-2 convert arachidonic acid to the intermediate PGH2, which is then metabolized by specific distal enzymes to produce the different PGs and thromboxane. NSAIDs inhibit both COX forms, while the coxibs selectively inhibit COX-2. By BQUB14-Msanjose, License: CC-BY-SA-4.0

The cyclooxygenases exist as isoenzymes COX-1 and COX-2. COX-1 is constitutively expressed in many cells of the human body, including the cells of the gastric mucosa, where it facilitates the synthesis of PGE2 (prostaglandin E2) to protect the mucosa. COX-1 is thus responsible for many physiological processes.

COX-2, however, is only constitutively present in a few cells (kidney, brain, and vessels) and is thus primarily an inducible enzyme. Its expression is greatly increased in inflammation, trauma or ischemia, which trigger pathological events, such as fever, inflammation, and pain.

The isoenzymes of cyclooxygenases can be inhibited via selective and non-selective inhibition.

Side effects of non-selective COX inhibitors

The cyclooxygenases exist in multiple cells of the body, and therefore, exhibit a wide range of side effects:

ASA is one of the oldest and most well-known painkillers, and its effectiveness depends on dosage:

ASA is thus administered to lower fever and the management of general pain. However, in high doses, it can also be used to treat acute and chronic inflammation (e.g., gout, rheumatic fever, osteoarthritis, and rheumatoid arthritis).

Thrombocyte aggregation is inhibited when the COX-1 is inhibited at least 95%. ASA is the only analgesic that irreversibly inhibits the cyclooxygenases via acetylation. As thrombocytes have no nucleus and thus cannot synthesize new COX-1, the inhibition of thrombocyte aggregation lasts for 8–10 days (corresponding to platelet lifespan) and can be used in the prophylaxis of thromboses and embolisms, treatment of CHD, PAD and cerebrovascular diseases as well as secondary prophylaxis of heart attack or stroke. 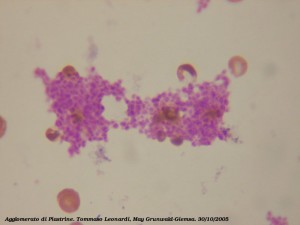 ASA must be discontinued at least 7 days before surgery to reduce the risk of intraoperative bleeding.

‘Aspirin triad’ (also known as Samter’s triad) may manifest in response to ASA (but also other NSAR), defined by nasal polyps (polyposis nasi), asthma and sinusitis. Bronchoconstriction due to an imbalance between bronchodilatory prostaglandins and bronchoconstriction leukotrienes results in so-called analgesic asthma. The risk of bleeding is increased following treatment with ASA due to thrombocyte aggregation inhibition.

N.B. Samter’s triad and analgesic asthma are side effects of ASA. 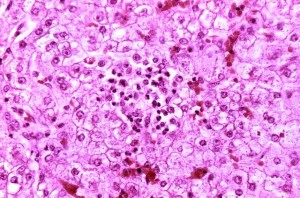 Reye’s syndrome is another side effect associated with ASA treatment, which can occur as a result of infection (chickenpox or influenza) in children under 16. Ir results in encephalopathy and fatty liver cell degeneration. The clinical manifestations include vomiting, unconsciousness, cerebral edema, and spasm as well as increased levels of ammonia, transaminases, and coagulation disorders as a sign of liver insufficiency. ASA treatment is associated with a lethality rate of 25–50%, and therefore, should only be used conservatively in children. 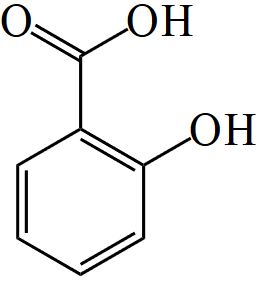 Separating acetyl from ASA results in salicylic acid, which is expelled renally. Salicylic acid has an acidic pH, and thus its elimination can be accelerated via alkalization of the urine (e.g., by administering bicarbonate), especially in the event of intoxication with ASA.

Another example of an NSAR is ibuprofen, which acts as a reversible inhibitor of cyclooxygenases. Similar to ASA, it is analgesic, antipyretic and anti-inflammatory when administered in higher doses (single dose: max. 800 mg, maximum daily dosage 2400 mg). Unlike the other acid analgesics, its gastrointestinal side effects are rather minor, which increases its gastric tolerance. Further, it does not accumulate after multiple doses, making an overdose unlikely. Simultaneous ingestion of ASA and ibuprofen lowers the inhibition of ASA on thrombocyte aggregation as the substances compete for the catalytic center of the COX-1. 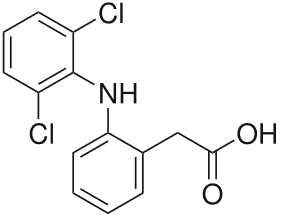 The NSAR diclofenac alleviates pain more effectively than ASA or ibuprofen. The side effects correspond to the characteristically undesired effects of the non-selective COX inhibitors, with gastrointestinal discomfort being the most significant.

Paracetamol is the most frequently used analgesic and antipyretic. Because of its low side effect profile (very few gastrointestinal side effects), it is the medication of choice for pain and fever in children and pregnant women. Unlike acid analgesics, it is not anti-inflammatory and can be administered as juice, tablets, suppositories or an injection. 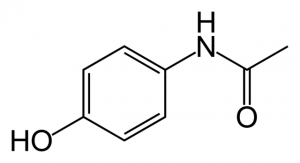 Paracetamol is mainly metabolized in the liver via glucuronidation and sulfation. It breaks down into reactive intermediates, which are inactivated by linkage to glutathione. In the event of an overdose of paracetamol (> 7.5 g per day), the glutathione reserves are exhausted, and the reactive metabolites are no longer inactivated or bind with liver cell proteins, resulting in liver cell necrosis with the risk of liver failure. The sulfhydryl group donor N-acetylcysteine is a life-saving antidote.

N.B. Paracetamol is hepatotoxic when administered in excess doses! 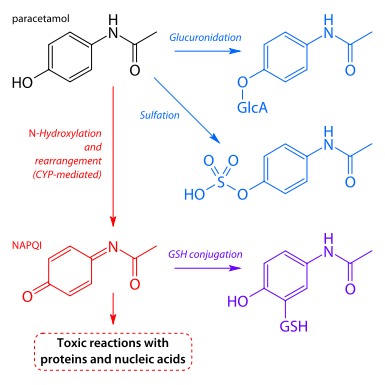 Due to the potential liver toxicity, paracetamol should not be administered to patients with severe liver dysfunction, glucose-6-phosphate-dehydrogenase deficiency (decreased glutathione reserves!), and alcoholism.

An overdose of paracetamol may also have a toxic effect on the kidneys.

It may be administered orally, rectally or intravenously. However, rapid IV injection may trigger shock with a lethal outcome.

Gastrointestinal side effects rarely arise after the ingestion of metamizole. However, various hypersensitivity reactions such as leukopenia, exanthema and moderate-to-severe anaphylactic reactions (see above) do occur.

N.B. An important side effect of metamizole is agranulocytosis.

Metamizole is primarily metabolized in the liver and expelled through the kidneys. Contraindications for the administration of metamizole include acute hepatic porphyria and hereditary glucose-6-phosphate dehydrogenase deficiency.

N.B. Due to the life-threatening side effects of metamizole, it is not recommended except for very strong indications!

Selective COX-2 inhibitors, also known as coxibs, selectively inhibit COX-2 as the name implies. They do not inhibit the gastroprotective prostaglandin-producing COX-1, which leads to a reduced side effect profile with a rare incidence of gastrointestinal complaints.

Celecoxib (p.o.) and Etoricoxib (p.o.) are used to treat arthrosis and rheumatoid arthritis and parecoxib (IV, i.m.) for treatment of post-operative pain. However, long-term use may lead to thrombotic cardiovascular events (heart attack or stroke). Therefore, low dosage and a brief treatment period are recommended.

N.B. The cardiovascular risk of coxibs increases with dosage and duration!

Opioids are discussed in more detail in the article ‘Anesthesia’. However, a brief overview of the low-potency opioids is provided below.

The low-potency opioids tilidine, dihydrocodeine, codeine, and tramadol are designed to alleviate moderately severe to severe pain. Compared to the reference substance morphine, they are less effective and have a lower analgesic (relative) potency (RP < 1). 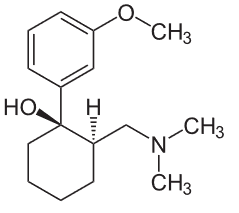 Tilidine has an analgesic potency of 0.2 with a duration of action of nearly 3 hours. Hepatic conversion yields the active metabolite nortilidine. Tilidine is available in combination with the opioid-antagonist naloxone. Oral ingestion of normal dosage of this compound inactivates the naloxone portion via the first-pass effect, to allow the effect of nortilidine. However, when tilidine is improperly injected intravenously, naloxone acts as an antagonist against the opioid receptor and prevents addictive effects and hypoventilation.

Medications that usually have a different indication, but actually alleviate pain in combination with analgesics or even act independently, are administered as coanalgesics for adjuvant pain therapy. The list of coanalgesics includes: