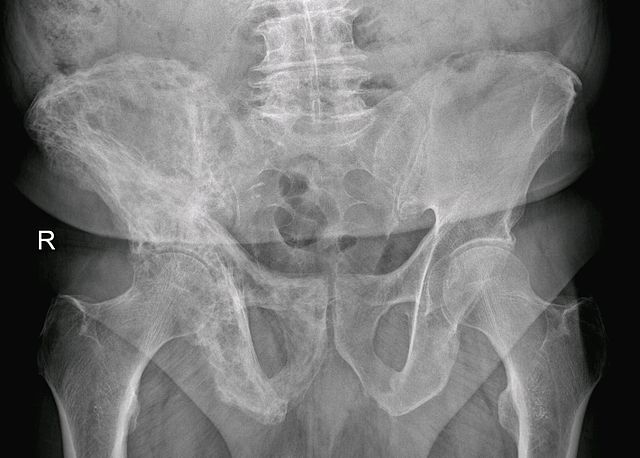 Paget’s disease of bone, more commonly referred to as simply Paget’s disease, or historically osteitis deformans is a disorder of bone metabolism.

Paget’s disease is quite common in patients (males > females) over 55 years-old in the United States of America, United Kingdom, Australia, and South Africa. The estimated prevalence ranges from 2.3 to 9%. Paget’s disease does not occur in children. It’s important to understand that children can have a similar but unrelated condition called juvenile Paget’s disease, an autosomal recessive disorder causing bone dysplasia.

Pathophysiology and Histology of PDB

It is currently believed that the pathogenesis of Paget’s disease has both genetic and environmental factors, but no absolute correlation has been determined yet. One popular belief is that Paget’s disease can be a manifestation of a Paramyxovirus viral infection affecting osteoclasts.

Although Paget’s disease results from increased osteoclast and osteoblasts activity, you can think of it as primarily an osteoclast disorder. The pathologic osteoclasts create an environment of both increased bone resorption and formation – leading to pathologic bone remodeling. This bone remodeling can be understood as a series of stages.

Histologically, the affected bone is disorganized and said to have a “mosaic” or “woven” pattern of randomly arrayed lamellar bone with irregular cement lines (this is why the affected bone is structurally unsound and easily fractures). Osteoclasts are seen in increased number, they have a bizarre appearance, and they are overly multinucleated. Trabecular bone is variably thickened and lined with osteoblasts. And normal bone marrow can be replaced with highly vascular tissue.

One analogy to think of when trying to understand Paget’s disease is a large group of inexperienced construction workers that drank too much coffee. Imagine that half the group only demolishes and the other half only builds. They are frantic and trying to remodel a building. And because they are inexperienced, they end up tearing down important structural parts. Meanwhile, the other half is trying to quickly patch everything up and, since they are just as inexperienced, end up doing a horrible job. The final product is a building with almost no structural integrity and it collapses when a passerby merely sneezes on it.

Clinical Manifestations and Complications of PDB 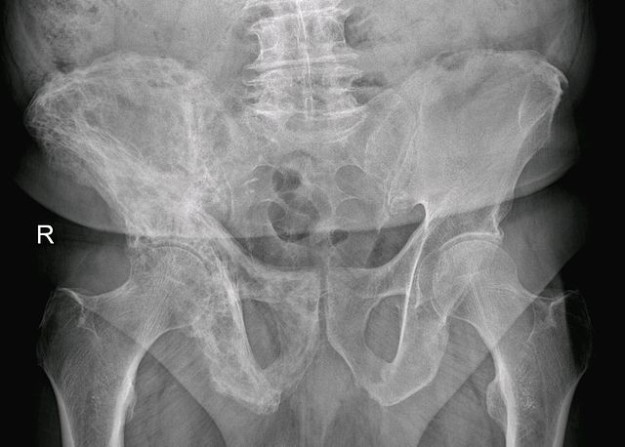 Paget’s disease is usually asymptomatic and discovered incidentally from routine serum chemistry or imaging studies. When symptoms do manifest, they are usually associated with pathologic bone but can also include other systems. The most common symptoms are arthritis, pain, and fracture. For the purpose of the USMLE, common associations are increased hat size and loss of hearing (from narrowing of auditory foramen) and the only abnormal finding on serum chemistry is elevated alkaline phosphatase.

Below is a list of commonly affected areas in order of decreasing prevalence (keep in mind that there is no definitive pattern and the disease may affect just one area or several asymmetrically).

Rarely, Paget’s disease can be associated with high-put cardiac failure. This can occur when the highly vascular tissue that replaces normal bone marrow forms arteriovenous malformations. Another complication of Paget’s disease is an increased risk for osteosarcoma. Remember that tumors result from a mutation leading to unregulated overproduction of cells and with Paget’s disease, the high rate of osteoblast production provides increased opportunity for mutation.

Diagnosis and Differential Diagnoses of PDB

Paget’s disease is diagnosed when clinical and radiographic image findings suggestive of the disease are present. Laboratory and other tests to determine bone turnover are not necessary. Bone biopsy is only done if there is radiographic evidence that raises concern for malignancy or metastatic disease.

Since the main symptom is aches and pain, osteoarthritis is an important differential that needs to be ruled out. When the presenting symptom is a pathologic fracture or radiographic lesions are present malignancy (most commonly of the metastatic origin or primary osteosarcoma) must be ruled out. 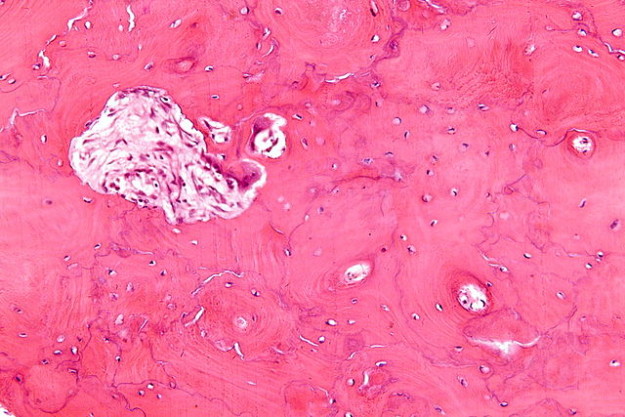 The primary goal of treatment is to reduce pain and rate of bone remodeling. Therefore, treatment is not always necessary; asymptomatic patients may receive treatment if there are significant laboratory abnormalities or radiographic findings suggest an increased risk of complication (such as fracture or malignancy).

The USMLE will not likely test on exact treatment regimens or approaches. It is more important to focus on indications for treatment and which pharmacological agents are commonly used. That said, the treatment of Paget’s disease is bisphosphonates (remember that they work by inhibiting osteoclast activity). And the main bisphosphonates used are zoledronate, risedronate, and alendronate. Occasionally, calcitonin is used if the patient is unable to tolerate bisphosphonates.

Bisphosphonates are also commonly used for many other bone disorders (such as osteoporosis) and they are generally well tolerated. The most frequent adverse effect is gastrointestinal upset (patients, if prescribed oral therapy, must take the medication in the morning on an empty stomach). An important piece of information to remember is that GI upset greatly decreases patient compliance. Other adverse effects are flu-like symptoms, musculoskeletal pain, osteonecrosis of the jaw and hypocalcemia.

Finally, the last treatment option is surgical intervention. This is reserved for cases of advanced disease, fracture at presentation, bone deformity, malignancy, or pain persists after pharmacological therapy. The only important fact to remember with surgery is that the patient may have increased risk of blood loss (remember AVMs can be present).