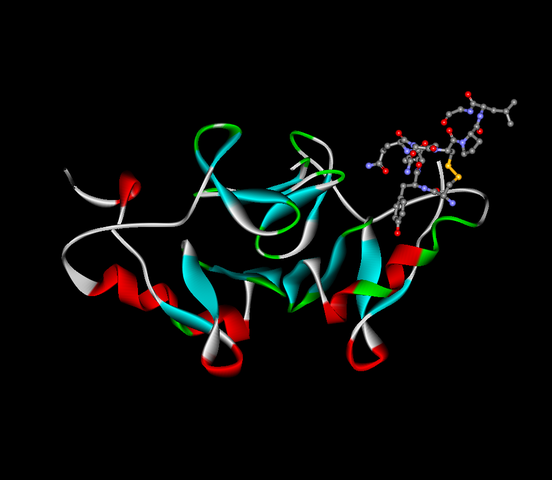 Oxytocin is synthesized in the paraventricular nuclei of the hypothalamus. Like most other hormones, the synthesized form is an inactive precursor protein, from which the successive hydrolysis leads to the release of the final active oxytocin.

Neurophysin 1 is the characteristic precursor carrier protein, which is present in the precursor state. It should be noted that the secretion does not occur at the place of synthesis. The transport of the synthesized hormone occurs to the posterior pituitary gland via the stalk.

One of the characteristic proteins which are required for the hydrolysis of oxytocin is the peptidylglycine alpha-amidating monooxygenase. This enzyme, in turn, requires vitamin C as the necessary cofactor. Oxytocin gets metabolized by means of an enzyme known as oxytocinase.

Though the posterior pituitary forms the major neural source of oxytocin, it should be noted that there are non-neural sources of oxytocin as well, like the corpus luteum and placenta in females and Leydig cells in males.

Mechanism of action of oxytocin in the uterus

Physiological uterine contractions are produced by oxytocin, with the law of priority being maintained (it should be noted that ergometrine causes complete loss of polarity during its contraction). The onset of action is also faster with oxytocin when compared to ergometrine, but it is short-lived.

At the biochemical level, oxytocin acts through the G-protein coupled receptor, which functions via the phosphatidylinositol calcium channel. This, in turn, leads to the release of prostaglandins and leukotrienes. Oxytocin increases both the frequency as well as the force of contraction of the uterus, and only at higher doses causes prolonged and sustained contractions.

Clinically, oxytocin is used for the induction of labor and it also helps in the labor augmentation. In the case of postpartum hemorrhage, it is used along with ergometrine.

Role of oxytocin in pregnancy

Oxytocin is used during pregnancy to accelerate abortion, especially in the case of missed abortion and the case of expulsion of the hydatidiform mole. It is also used for ripening of the cervix before the induction of labor and in the case of uterine inertia.

Role of oxytocin in males

The oxytocin receptors are found in the epididymis, and research has shown that it increases the motility and number of the sperm. It also helps in the conversion of dihydrotestosterone.

Oxytocin is used for diagnosis in the contraction stress test and oxytocin sensitivity test, which is currently not routinely used.

Oxytocin is researched as a major trust-producing hormone. In a lighter note, it has been tried as a love-making hormone, confidence-generating hormone and has been used in relationship counseling.
In lactation deficiency, the nasal spray formulations of oxytocin have been tried.
Oxytocin nasal spray has been tested in cases of depression and many other social disorders. It is currently in the clinical trials for a variety of psychiatric disorders like schizophrenia and autism.

Side Effects and Contraindications of Oxytocin

The side effects of oxytocin are hyperstimulation of the uterus, water intoxication due to the antidiuretic effect (structural similarity with the vasopressin), rupture of the uterus, hypotension, and pain of the anginal variety. All these will also have an effect on the fetus, leading to fetal distress, hypoxia and even fetal death.

Available evidence shows that for the augmentation of delayed labor, the high dose regimen of oxytocin will be reducing the length of the labor as well as the number of cesarean sections. In addition, it also increases the vaginal birth, which will occur spontaneously. Whereas in the case of induction of labor, the high dose and low dose have not shown any significant differences.

Atosiban, on the other hand, an oxytocin receptor antagonist, can be used as a tocolytic in the uncomplicated premature labor. It is available in Europe but not the United States. It acts as a second line of treatment after nifedipine (which is most commonly used for the preterm labor in between 32nd to 36th week). The efficacy of atosiban in a meta-analysis has been compared to that of beta agonists.

Anti-diuretic hormone (ADH) is synthesized in the suprachiasmatic nuclei of the hypothalamus. It should be noted that the secretion does not occur at the place of synthesis. The synthesized hormone is transported to the posterior pituitary gland via the stalk. When the impulse for secretion arises, it occurs from the posterior pituitary. At supra-physiologic levels, ADH acts on V1 receptors to cause vasoconstriction, hence the term vasopressin. 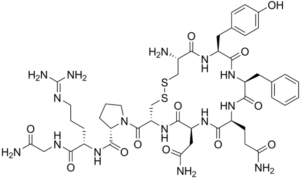 Vasopressin’s primary function is in the retirement of the water in the body and the constriction of the blood vessels. ADH release normally occurs following stimulation of osmoreceptors, usually due to increased plasma osmolality. ADH acts on V2 receptors at the distal kidney tubule and the collecting duct by causing insertion of aquaporin channels, thus increasing their permeability to water.

The resulting increased permeability of the collecting ducts causes reabsorption of water to occur. Water enters the hypertonic interstitium of the renal pyramids, thus concentrating the urine. In the absence of ADH, the urine is hypotonic to plasma (dilute urine), urine volume is increased, and there is net water loss leading to the increased osmolality of body fluids.

Other functions of vasopressin

The decrease in vasopressin secretion, as well as the alteration in the effect of vasopressin in the kidney, result in a characteristic disease known as diabetes insipidus.

The inappropriate secretion of ADH  in the case of euvolemic hyponatremia is known as Syndrome of inappropriate antidiuretic hormone secretion (SIADH). The causes include small cell carcinoma of the lung as well as a number of drugs such as SSRI and tricyclic antidepressants.

Vasopressin as a therapeutic drug

Pharmacologically, vasopressin analogs are used in the management of von Willebrand Disease (vWD) type I and Hemophilia A. They are the second line of choice in shock patients after the failure of response to norepinephrine and dopamine.

The role of oxytocin in psychiatric disorders: A review of biological and therapeutic research findings via nih.gov