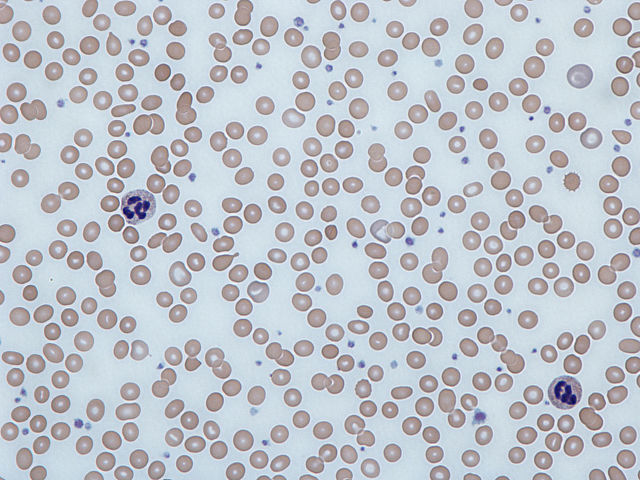 Red blood cells, also known as erythrocytes, make up the cellular part of blood, giving it its red color and also the ability to bind and carry oxygen to all parts of the body. Under a microscope, they appear to be circular and biconcave in shape.

Hemoglobin is the biochemical component of the red blood cells (RBCs) that is responsible for binding with oxygen. It is a metalloprotein, with iron being the metal attached to globular protein.

Hematocrit is the measure of the total volume % of red blood cells in the blood. The normal value for hematocrit is 45% for men and 40% for women. It is an important component of a patient’s complete blood profile.

The size of the red cell is useful in diagnosis:

According to the WHO anemia in non-pregnant and otherwise healthy people is characterized by a hemoglobin value lower than 12.5 g/dL. Acute anemias affect young adults and people in their 50’s.  Females in their reproductive age (due to menses and pregnancy) are usually more prone to be anemic. Overall, females have twice as much susceptibility to developing anemia than males.

Certain races, due to certain genetic factors, have the prevalence of different types of anemias. For example, thalassemia is found mainly in the South East Asian region, whereas sickle cell anemia is more prevalent in Africa.

Try out the entire course for free: Hematology basics

In this type of anemia, the MCV is lower than 80 µm³. This is caused by problems in hemoglobin synthesis. There are three types of microcytic anemia.

Iron is the main component of hemoglobin, lack of iron results in decreased synthesis of hemoglobin, resulting in a reduction in the size of red blood cells. It can be due to four reasons:

Iron studies play a vital diagnostic role in determining the types of anemia and many other diseases that involve iron metabolism. It is composed of four main values:

Treatment of the underlying cause (inflammation due to infection, malignancy autoimmune disorder, etc.). 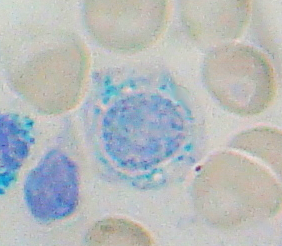 Iron accumulates in the cells because it is not being utilized to make heme due to the absence of protoporphyrin. This results in the characteristic ring sideroblast – iron-laden mitochondria making a ring around the nucleus of the RBC precursor cells.

Thalassemia occurs due to abnormalities in the synthesis of the globular chains that attach to heme to make hemoglobin. There are two types of thalassemias:

Severe anemia, extramedullary hematopoiesis leading to hepatosplenomegaly and a chipmunk appearance of the face are symptoms of thalassemia.

In this type of anemia, the mean corpuscular volume is greater than 96 µm³. 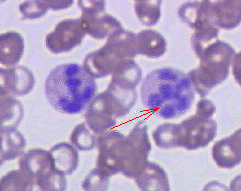 Megaloblastic anemia is the most common form of macrocytic anemia and is caused specifically by vitamin B12 and/or folate deficiency. It is characterized by MCV > 100 and hypersegmented neutrophils and megaloblastic changes in all rapidly dividing cells of the body, for example, the cells of the tongue.

Alcoholism and liver disease are both causes of the megaloblastic anemia, as well as drugs like 5-fluorouracil. There are no hypersegmented neutrophils or megaloblastic changes in the rapidly dividing cells found here.

Vitamin B12 is a water-soluble vitamin found in animal-derived proteins. The most common cause of vitamin B12 deficiency is pernicious anemia, which is autoimmune-mediated destruction of the parietal cells of the stomach that decreases the production of hydrochloric acid and intrinsic factor, both of which are needed for absorption of vitamin B12.

Other causes include pancreatic insufficiency (as pancreatic enzymes are needed to free vitamin B12) and damage to the part of the small intestine (terminal Ileum) where vitamin B12 is absorbed.

Due to these functions, vitamin B12 deficiency results in increased homocysteine and methylmalonic acid in the blood. The latter can also contribute to subacute combined degeneration of the spinal cord because methylmalonic acid accumulates and degenerates the myelin in the spinal cord. Other symptoms include glossitis, megaloblastic anemia, and hypersegmented neutrophils.

The mean corpuscular volume in normocytic anemia is within the range of 80–96 µm³. 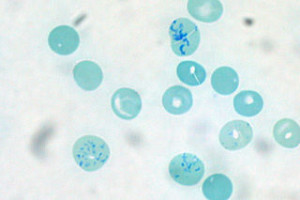 Reticulocytes are young red blood cells which are large and stain blue due to the presence of RNA. The reticulocyte count is of great clinical significance as it reflects the nature of anemia. Normal reticulocyte count without any underlying pathology is 1–2%.

In case of normocytic anemia, if the reticulocyte count is…

Reticulocytes are observed in the peripheral blood smear of a patient with hemolytic anemia. Normocytic anemia occurs in three conditions:

This includes the following types of blood disorders:

Clinical findings of an extrinsic defect in RBCs 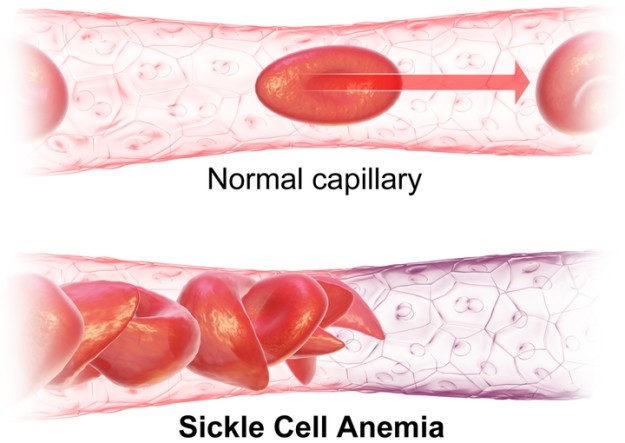 Sickle cell anemia is a genetic defect in the synthesis of hemoglobin chain. Glutamic acid gets substituted by valine, resulting in HbS, which sickles (polymerizes) when deoxygenated. Sickling can lead to a range of severe symptoms: 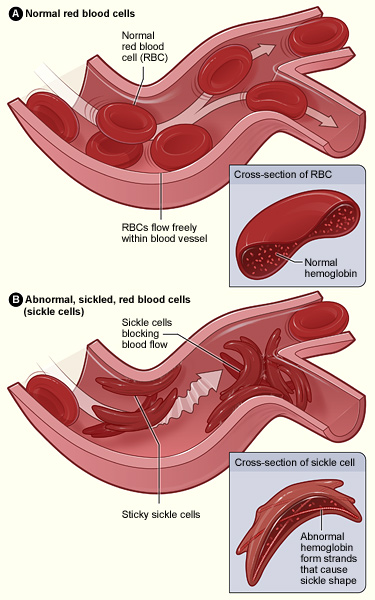 Glucose-6-phosphate dehydrogenase deficiency (G6PD deficiency) leads to reduced production of NADPH, which is needed to reduce oxidized glutathione. Glutathione is oxidized while protecting the RBCs from hydrogen peroxide. Therefore, G6PD deficiency results in destruction of RBCs by oxidative stress.

Heinz bodies are characteristic of this disorder. When they are removed by splenic macrophages, we see “bite cells.” Symptoms include hemoglobinuria and back pain (due to nephrotoxicity of the Heinz bodies).

Anemia – Symptom and Causes via nhlbi.nih.gov.

What Is Sickle Cell Disease? via msdmanuals.com