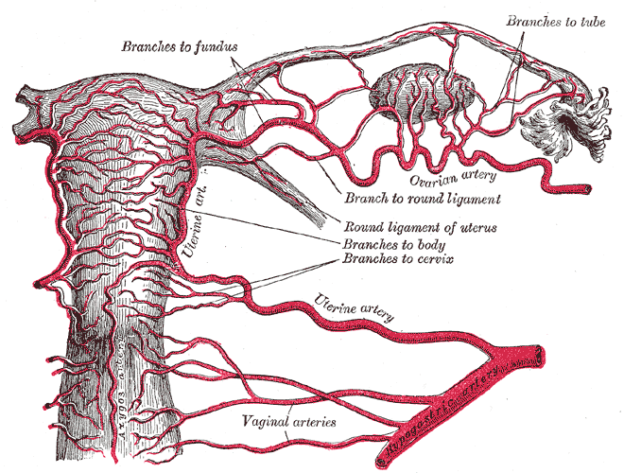 The infundibulopelvic ligaments are responsible for the suspension of the mobile ovaries. They are responsible for positioning the ovary in a lateral or posterior aspect compared to the uterus. Within these ligaments, the ovarian vessels travel to supply the ovary with blood. The infundibulopelvic ligaments are not fixed; therefore, a tumorous growth can lead to twisting of the ligaments.

The most common precipitating factor for ovarian torsion is the presence of an ovarian cyst or mass which rotates the ovary around the infundibulopelvic and utero-ovarian ligaments. In most cases, the ovarian mass or cyst is a benign tumorous growth rather than a malignant one.

Ovarian torsion is the most common cause of gynecological surgical emergencies.

Most ovarian torsions occur in women in the reproductive age; however, up to 17% of the cases of ovarian torsion were found in pre-menarchal or post-menopausal women.

Ovarian cysts are more likely to occur in women with benign ovarian masses, rather than in those with malignancy. The estimated incidence of ovarian torsion in women with ovarian malignancy was found to be below 2%. 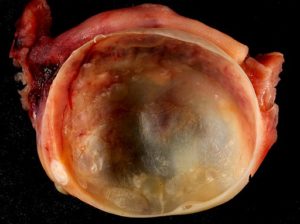 Ovarian stimulation is shown to increase the risk of developing torsion mainly due to the ability to lead to the development of a mass/ cyst.

Up to 22% of ovarian torsions occur in pregnancy. The incidence is highest in pregnant women who are at 10 to 17 weeks of gestation, especially if they have an ovarian mass.

Other risk factors for the development of ovarian torsion include:

Congenital abnormalities, such as an elongated fallopian tube.

A history of pelvic surgery may indicate the presence of adhesions that may trigger the formation of ovarian torsions.

The most common symptom of ovarian torsion is:

There may be a history of recurrent episodes of similar events indicating a self-resolving state.

Fever may set in after necrosis of the organ or superinfection of the edematous tissue.

Once a thorough history and physical examination is obtained, laboratory testing should be started. Serum human chorionic gonadotropin levels should be determined to exclude ectopic pregnancy as a cause of acute abdominal pain.

Also helpful in the diagnostic workup for ovarian torsion:

Serum markers can hint to the possibility of an adnexal mass; however, there are no specific serum markers that are suggestive of torsion. Serum human chorionic gonadotropin levels are usually elevated in women with ovarian germ cell tumors. CA-125 levels are elevated in women with malignant ovarian tumors. Patients with ovarian torsion might have an elevated serum level of interleukin-6.

Imaging studies are important in the evaluation of any patient presenting with a suspected pelvic mass. Ultrasonography is the first-line diagnostic imaging modality. A torsed ovary appears rounded and enlarged compared with the contralateral ovary. The enlargement of the ovary is due to edema and vascular engorgement.

Ovarian torsion is a surgical emergency. The laparoscopic approach has become the popular choice in patients with ovarian torsion and no clues of malignancy. If the malignant disease is suspected, laparotomy should be performed.

During the surgery, it is essential to assess the viability of the ovary. Early de-twisting of the ovary can preserve the function of the ovary. Viability is determined by gross visual inspection during surgery. Nowadays, ovarian preservation surgery is always recommended, even if the ovary appears black or blue. Salpingo-oophorectomy should be avoided whenever possible.

Ovarian cystectomy is performed to excise the benign ovarian mass, which was responsible for the torsion. If malignancy is suspected, a salpingo-oophorectomy might be performed.

Necrosis typically occurs after the ovarian vessels have been occluded for 36 hours or more. Accordingly, early intervention to save the ovaries is recommended. Pregnant women with ovarian torsion should undergo laparoscopic detorsion like non-pregnant women.

Suppression of ovarian cysts by the administration of oral contraceptives and oophoropexy are the most common options for the prevention of recurrence after detorsion. Patients with ovarian torsion typically are in severe pain; therefore, good analgesia is recommended while at the emergency department before transferring the patient to the operating theater.