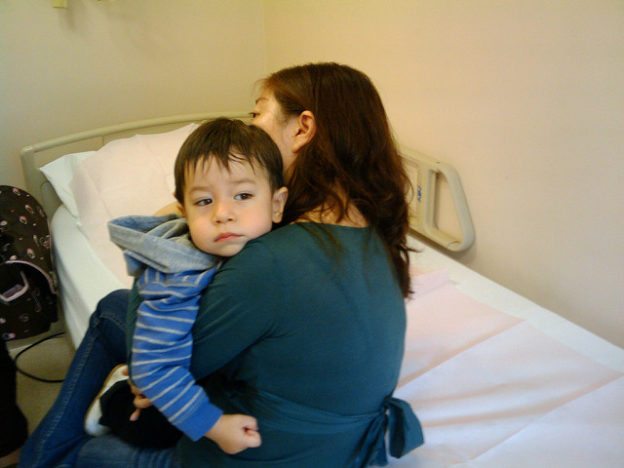 Acute otitis media is an inflammation of the middle ear that is usually caused by a bacterial infection and is typically seen in children younger than 5 years.

The prognosis of acute otitis media in children after adequate antibiotic therapy is excellent. Hearing loss is usually reversible and most children show significant symptomatic treatment within 48 hours of the initiation of antibiotic therapy.

The previously-mentioned bacterial pathogens are usually unable to adhere to the mucus lining of the middle ear and are unable to cause inflammation on their own. Therefore, an ongoing viral infection is needed to make it easier for these bacterial pathogens to adhere to the mucous linings, resulting in impaired mucosal linings of the upper respiratory tract, middle ear, and the eustachian tube.

Another important key factor in the pathogenesis of acute otitis media in children is the status of the immune response. Children with impaired immunoglobulin G production, which is responsible for the neutralization of pathogens that have polysaccharide antigens, such as Streptococcus pneumoniae, are at an increased risk of developing acute otitis media.

On the other hand, children with excess production of immunoglobulin E are more prone to allergies and have been found to have an increased risk of eustachian tube dysfunction, hence are more likely to develop acute otitis media than normal children. 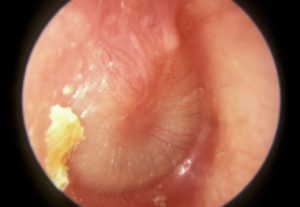 Image: “The middle ear is filled with a creamy white mucopurulent exudate which is causing the tympanic membrane to bulge laterally. Note the dilatation of the radial blood vessels of the tympanic membrane which appear like the spokes of a wheel.” by Michael Hawke MD – Own work. License: CC BY 4.0

Children who are older than one year usually present with ear pain, purulent discharge from the ear and conductive hearing loss. Fever is usually present. Ear popping and the feeling of ear fullness are also common symptoms of acute otitis media in children.

Routine laboratory investigations are not useful in establishing the diagnosis of acute otitis media in children as the probability of finding leukocytosis on a complete blood count is low. A recent study has shown that children with acute otitis media caused by non-typeable Haemophilus influenzae might have elevated serum levels of protein S100A12 and interleukin-10. The value of these markers in clinical practice has not been established.

Tympanocentesis is a procedure that allows for the aspiration of the fluid of the middle ear and the identification of the causative organism and its sensitivity profile. This is an invasive procedure that should be reserved for selected patients. Neonates younger than 6 weeks, immunocompromised children, or children who fail to respond to antibiotic therapy and develop sepsis should undergo a tympanocentesis.

Delayed diagnosis and inadequate treatment of acute otitis media in children can cause intracranial complications, such as cerebral venous thrombosis and brain abscess formation.

Children who appear healthy, despite having an acute otitis media, should be offered conservative management and antibiotics are better withheld. A follow-up visit should be scheduled within two or three days and, if no improvement is seen on the follow-up visit, antibiotic therapy should be initiated.

If antibiotic therapy is initiated, the recommended duration of treatment is usually five days. Antibiotic administration for ten days in children with acute otitis media failed to show any added benefits but was associated with a higher risk of developing side-effects and is therefore not recommended. The only drawback of a 5-day course of antibiotic therapy instead of 10-day course is the increased risk of relapse with the former.

The prognosis of acute otitis media in children after adequate antibiotic therapy is excellent. Hearing loss is usually reversible, and most children show significant symptomatic treatment within 48 hours of the initiation of antibiotic therapy.