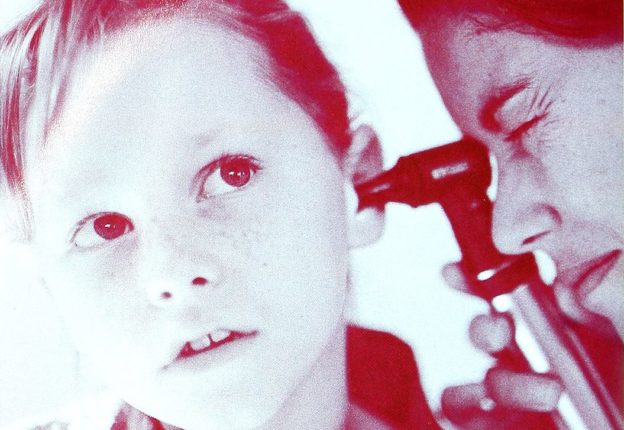 Acute otitis externa is an inflammation of the external acoustic meatus that is caused by an infection. The condition has been historically associated with prolonged water exposure; hence the name swimmer’s ear.

The most important risk factors for acute otitis externa in children are increased humidity, local trauma to the ear, the use of external devices and ear piercings and the development of atopic or contact dermatitis, or other allergic conditions that involve the skin of the external acoustic meatus.

For the bacteria to cause damage to the external ear, certain pathologic changes are required. The absence of cerumen within the ear canal is an important pathologic change that can predispose the child to develop acute otitis externa. This can result from excessive water exposure, such as participating in swimming or other aquatic activities, or over-cleaning of the ear canal. Trauma to the external ear and alteration of the pH of the ear canal can also predispose the child to acute otitis externa.

Increased moisture within the external acoustic meatus is believed to be the most important risk factor for acute otitis externa in children.

Children who develop acute otitis externa usually present with ear pain, and ear fullness. Tenderness of the tragus and pinna, conductive hearing loss, erythema, and otorrhea are common findings on physical examination. Most cases of acute otitis externa are unilateral in children.

It is important to ask for a history of recent partaking in aquatic activities, such as swimming or surfing. Forceful ear cleaning and the use of cotton swabs can also be identified as a trigger for the development of acute otitis externa.

The most crucial difference on pneumatic otoscopy between otitis externa and acute otitis media is the preservation of the eardrum mobility in the former.

Like acute otitis media, laboratory investigations are usually not needed in the diagnostic workup of acute otitis externa in children. The diagnosis is usually based on the presence of diagnostic clinical features on clinical examination, namely a tender tragus or pinna.

Children who fail to respond to antibiotic therapy should undergo gram staining and culture and sensitivity testing of the ear discharge to isolate and identify the causative organism of acute otitis externa.

During the healing process, the child should avoid partaking in aquatic activities such as swimming. The use of cotton swabs should also be discouraged.

Recent studies have shown that the use of topical steroids in the management of acute otitis externa can fasten the healing process and decrease the symptoms. Combination therapy of antibiotic-steroid eardrops is considerably more effective than antibiotic therapy alone or antibiotic therapy combined with acetic acid. The choice of antibiotic should be based on the status of the tympanic membrane and the antibiotic hypersensitivity history from the child.