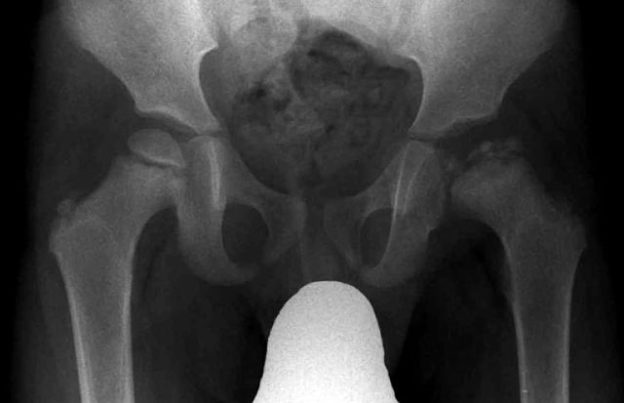 Blount’s disease is a pediatric orthopedic problem in which the leg is bowed outward or in a varus position. It is due to a dysfunctional growth of the posterior medial aspect of proximal physis of the tibia resulting in the lower limb deformity. It is a developmental disorder. There are internal rotation and medial angulation of tibial physis and outward bending of the lower limb. Failure to receive early treatment may lead to disease progression. 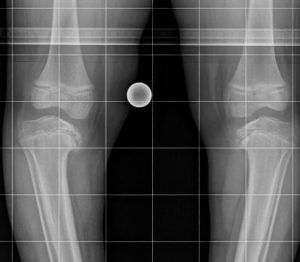 The exact cause of the disease is still unknown, but it occurs due to the combination of genetic and developmental factors. Obesity has a direct link, especially in the late-onset form of the disease. It leads to the mechanical load on the proximal region of tibia resulting in the pressure molding; however, a mechanical load cannot be the sole reason as the disease also occurs in normal weight children. In short, the etiology can be described as multifactorial. The inheritance pattern has not been clearly established for Blount’s disease.

A child with Blount’s disease may present with the following features:

Blount’s disease is due to a cumulative effect of mechanical forces along with altered bone anatomy. This is still a controversy which factor takes initiative.

The treatment options can be divided into surgical and non-surgical options.

It should be applied to all cases younger than 3 years of age. The ambulatory bracing is done along with above-knee orthosis to stop the progression of the disease process. It corrects the varus deformity and growth disturbance. The treatment is more useful in the early stages of the disease.

It is reserved for stages 3 and 4 of Blount’s disease. The various surgical procedures include osteotomies, fixation methods, and hemiepiphysiodesis.

Prognosis in infantile cases is good and the recurrence rate is very low when treatment is started timely at a young age and at an early stage.

LCPD is avascular necrosis of the proximal head of the femur. It results due to a lack of blood supply to the region of a femoral head. The disease mostly occurs in children aged 4–10. It can affect one side or both of the legs. The onset is insidious and mostly occurs after an injury. In majority of cases, it is unilateral. 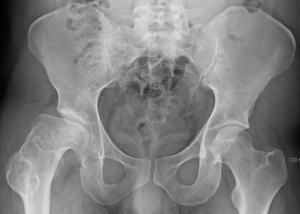 Continuous blood supply is necessary for rapid growth. An absence of blood supply results in the necrosis and breakdown of the bone. The process of bone replacement takes place, but its adequacy is dependent on many factors like the age of a patient and other medical conditions. The disease is five times more common in boys than girls.

In most of the cases, an exact cause cannot be identified but many risk factors have been studied in association with LCPD.

This is a rare disease condition occurring in approximately 4 out of 100,000 children.

The signs and symptoms of Legg–Calvé–Perthes Disease include:

CBC, DLC, and ESR are the common tests that are done on every patient of LCPD, although they can turn out to be completely normal. The radiological investigations include X-rays, MRI, and bone scans. X-rays include the anteroposterior and lateral view of the leg. It is also used for the follow-up of the disease. The LCPD is staged depending on the radiological findings.

The lack of proper treatment in time may lead to worsening of the disease and higher chances of developing hip arthritis in the adulthood. The disease is managed on medical and surgical grounds.

The aim of medical therapy is to eliminate hip irritability, maintain a good range of motions, prevent the collapse of femoral epiphysis, and attain a normal femoral head as the healing process is started. This is done through the following procedures:

It involves the femoral osteotomy, removal of loose bodies or bone fragments, joint realignment and the joint replacement. The complication of surgery can be the shortening of the leg, bone fractures and the damage to nerves.

SCFE is a condition where the head of the femur slips backward off the neck of the femur. This is seen in pre-teens and teens, in the growing age. It is an important hip disorder encountered in the pediatric and adolescent population. The condition is rare, but accurate diagnosis and treatment are crucial. In SCFE, the proximal growth plate of a femur is unstable. The head of the femur slips backward and downward from the neck of bone at the region of the growth plate.

The disease is regarded as multifactorial, which occurs due to the combination of constitutional and mechanical factors. The incidence rate is 2.5 times higher in boys in comparison to girls. On average, there are about 11 cases out of 100,000 children in the United States. The disease is classified as acute or chronic, depending on the duration. More than 3 weeks is termed as chronic.

SCFE falls under the classification of a Salter-Harris Type 1 fracture. The epiphyseal plate becomes widened due to excessive hypertrophy in the hypertrophic zone.

Histologically, there is an abnormal maturation of the cartilage, endochondral ossification, and instability of perichondral ring in SCFE. This disrupts the normal architecture of cartilage and produces a weak structure that leads to the disc slip. There can be inflammatory synovitis along with disorganized collagen, consisting of glycoprotein and proteoglycan, within the epiphyseal plate. 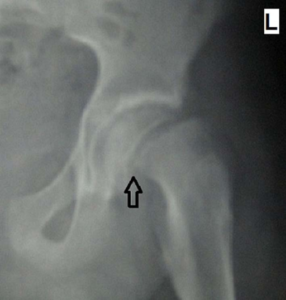 Symptoms vary according to the severity. Some striking features are as follows:

A series of laboratory and imaging tests are done to confirm the diagnosis. The laboratory test involves the hormone levels that can be associated with various endocrinopathies. X-rays, CT, MRI and bone scans are done to view the details of the SCFE. Usually, two views are taken, anteroposterior and lateral in the X-ray films. Klien’s line is drawn to make an early diagnosis. CT, MRI and bone scans are not routinely performed due to higher costs, but they give a better measure of the degree of displacement.

It is divided into medical and surgical treatment options. The definitive treatment is the surgical repair of SCFE.

Bed rest and physical therapy are an important part of the treatment. Painkillers like acetaminophen and NSAIDs are prescribed to the patient. Antipyretics are also given and antibiotics cover can also be initiated, depending on the situation.

It is often compulsory in all cases of SCFE. The disc is fixed with the help of 1 or 2 pins. Screws are also placed in the plane perpendicular to physis. The other side is also fixed to prevent its slippage in the future.

OSD is the apophysitis of tibial tubercle; the patellar ligament gets inflamed at the region of a tibial tuberosity. A bump appears below the knee joint which gets exaggerated with activity and relieved with rest. The traction occurs on the patellar tendon due to repetitive contraction of quadriceps.

The condition mostly occurs in the pre-adolescent age when the tubercle is skeletally immature and is more susceptible to trauma and strain. The disease mostly occurs from 12–14 years in boys and 10–13 years in girls.

OSD occurs during puberty spurts. The risk factors for the disease are male sex, excessive participation in sports activities, and the age around puberty.

The diagnosis is based on the history, physical examination, laboratory and radiological investigations. X-rays, US, CT, MRI and bone scans are done to confirm OSD.

The treatment of Osgood-Schlatter Disease can be covered under the following headings:

This involves symptomatic treatment to give relief to the patient. It includes limitation of the activities, application of ice to the region of inflammation, anti-inflammatory medicines, protective padding, and the quadriceps strengthening. Ice is placed for twenty minutes every two to four hours.

Medicines like analgesics, antipyretics, and anti-inflammatories are prescribed to relieve the discomfort. Lidocaine injections are also given in selective cases. The patient is advised to restrict the pain-producing activities, but long-term immobilization is highly discouraged. The knee is kept immobilized in a knee brace for a maximum of six weeks duration and it should be removed on a daily basis for practicing the stretch exercises.

It becomes more important for those who have to take an active part in athletic activities. The aim is to improve the flexibility and strength of the quadriceps muscles. There are many exercises that are performed during the course of physical therapy.

It is reserved for very limited indications and not routinely done for OSD. The ossicle gets resected during surgery. It has its own inherent complications, which include an unsightly scar, poor cosmesis, surgical wound dehiscence, and growth disturbance.

Symptoms completely disappear once a child comes out of the adolescent growth spurt, but the prominence of a tubercle may persist. Obstinate cases may require medical intervention.