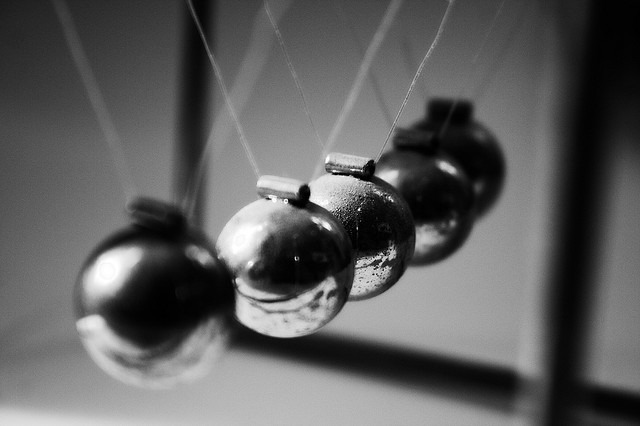 Oscillations are processes in which a physical quantity changes periodically for a period of time. These include movements that occur periodically around an idle position.

The most significant vibration form is the harmonic vibration; this periodic change of a physical quantity is sinusoidal. All other vibration modes are not harmonious.

Basic Concepts of Oscillations and Waves

At any given time during harmonic oscillation, a force acts in the direction of acceleration that wants to bring the oscillating body back to its center position. This force is known as the restoring force. This restoring force is proportional to the elongation.

The base equation of dynamics for mechanical oscillation is as follows:

From this principle, the equation of the undamped harmonic oscillation can be derived:

Whenever an oscillatory system is displaced and released from its zero position, it will begin to oscillate. If no other external forces are applied, it is a free oscillation. The frequency of the free oscillation is called ‘natural frequency,’ or ‘eigenfrequency.’

Resonance occurs when the excitation frequency matches the natural frequency of the oscillation. When the damping is small, the amplitude decreases greatly. In everyday life—and in technology—resonance plays a vital role.

Because most mechanical structures are subject to an oscillating force, they can be stimulated by external periodic forces. In the case of resonance, this would result in an increase of amplitude followed by the destruction of the structure.

To prevent such a ‘resonance catastrophe,’ one has to avoid any periodic forces or maintain large margins between the natural frequency and the excitation frequency, provide damping options, and allow a resonance frequency for only a short time—a time that is less than the buildup time. For rotary movements, the resonance frequency is referred to as a critical rotational speed.

When two oscillations in the same direction, but not the same frequency, are superposed, the result is a nonharmonic oscillation.

A wave is a spatial and temporary periodic process in which energy—but no matter—is transported. The direction of energy propagation is called the wave ray. Perpendicular to the wave ray runs the wavefront. The wavefront is the geometric location of all the particles that belong to the same phase.

The distance between two successive wavefronts is called the wavelength. The distance between two neighboring particles of the same oscillation phase is the wave propagation, which is independent of location and time. The wave propagation can be analyzed according to Huygens’ principle of wavelets. In this principle, every point of a medium covered by a wave motion can be regarded as the starting point of a new wave—a so-called wavelet. Each wavefront conforms to the envelope of wavelets. Huygens’ principle applies to all types of waves, even electromagnetic waves.

The velocity of wave propagation c is equal to the product of the frequency f with which each particle of the wave oscillates and its wavelength λ:

The velocity of wave propagation is given by the following equations:

Standing waves can occur with the reflection on a thinner or a denser medium. A standing wave occurs most frequently when a plane wave superposes with itself after a reflection.

When a wave strikes the boundary of its medium onto another medium, it is entirely or partially reflected. This process is called ‘reflection.’ The law of reflection is as follows:

angle of incidence = angle of reflection

Further change in the propagation velocity of the wave can be found at the edge of an obstacle, such as a slit. The obstacle does not cast sharp shadows. Huygens’ principle can explain the phenomenon of diffraction, as shown below. 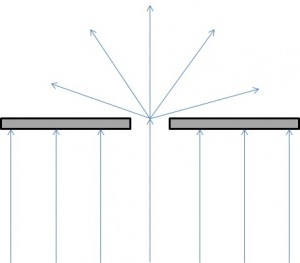 The electromagnetic wave is caused by the oscillation of the coupled electric and magnetic fields. They are dependent on the frequency.

The white light of an arc lamp or light bulb provides invisible radiation that can be found in the visible spectrum next to red. It is referred to as ‘infrared radiation’ and results in infrared light.

The ultraviolet color range lies outside the violet range of the visible color spectrum. Irritation and tanning of the skin by the sun are due to the ultraviolet light component. Mercury vapor lamps that are used as artificial tanning lamps also emit ultraviolet light.

The different impressions of color are projected to our eye by different frequencies of the visible spectrum:

Image: The electromagnetic spectrum. By Kristian Molhave. License: CC BY 2.5.

Apart from the nuclear components—protons, neutrons, and electrons—today, more than 200 other elementary particles are known. Many of them are the result of the interactions between the terrestrial atmosphere and cosmic radiation or the product of nuclear disintegrations supported by particle accelerators. The elementary particles are classified into the following groups:

Most elementary particles exist with an antipole electric charge and a reversed magnetic momentum; these are so-called antiparticles. If a particle meets with its antiparticle, the result is annihilation. The energy of annihilation is released as gamma radiation.

Sound waves are mechanical longitudinal waves. They have their origin in the sound source (a vibrating body) and propagate in solids, liquids, and gases in the form of compression waves.

In acoustics, distinctions are made among the following types of sounds:

Everything perceived with the human ear is called sound. We distinguish between tones and noises. The way we perceive a sound event depends on its volume, pitch, and timbre. Sound comes from a sound generator—which is an oscillatory body.

The speed of sound specifies how fast the sound propagates in a particular sound carrier. It is independent of frequency. In the air, for example, the speed of sound is 340 m/s and in water 1440 m/s.

When sound waves hit another medium, they are reflected at the transition boundary.

Example: In a sonographic measurement, frequencies of a specific size transmitted by a sound source are reflected at an interface (e.g., tissue or blood components in the Doppler method) and picked up with a measuring probe in a changed frequency. The distance covered can be calculated from the required time, given a known sound propagation speed (or known initial frequencies).
Learn. Apply. Retain.
Your path to achieve medical excellence.
Study for medical school and boards with Lecturio.
References