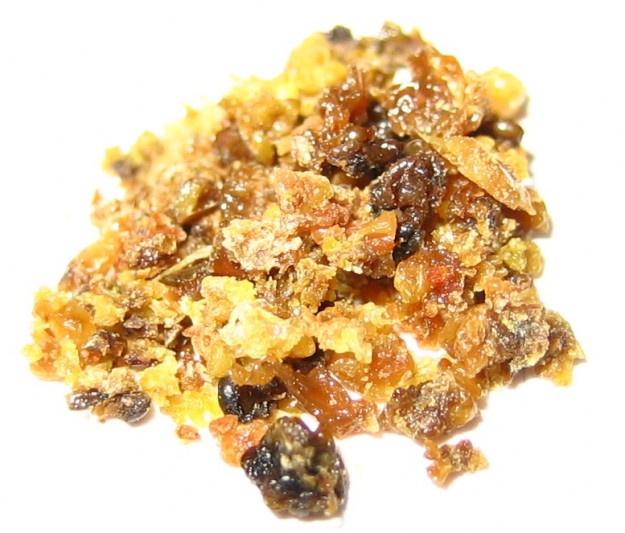 Opiates or opioid analgesics are a group of substances that bind to opioid receptors in the nervous system and other tissues. Opiates are mainly used for their analgesic activity, but they have many other effects throughout the body. The body also naturally generates its own opioid ligands such as endorphins and enkephalins. Currently, there are 4 known receptor types: μ, κ, δ and σ.

Most often, the terms opioids and opiates are used synonymously. Opiates are synthetic drugs derived from opium. The term opioid refers to all drugs (synthetic, semi-synthetic, and natural) with properties similar to opium.

Central and peripheral opioid receptors are coupled to inhibitory G-proteins. The inhibition of adenylate cyclase activity lowers Ca2+ and results in hyperpolarization.

Effects based on receptor types

The effects of binding with μ receptors include supraspinal analgesia, respiratory depression, miosis, and euphoria.

The effects of κ receptors include spinal analgesia, sedation, and miosis.

δ-receptors induce cardiovascular stimulation and mydriasis, and can cause dysphoria and hallucinations.

Classification of agonists and antagonists

Depending on their interaction with the receptors, opioids are classified into pure agonists, partial agonists, mixed agonist-antagonists, and pure antagonists:

Pure agonists bind to μ receptors and exert maximum effect depending on the dosage. They include morphine, fentanyl, and pethidine.

Partial agonists, i.e., buprenorphine, are associated with partially agonistic and antagonistic effects. They have a ceiling effect, which means that the effect plateaus at a certain dosage, and increasing the dosage will not increase its effect. This effect is attributed to the extraordinary affinity of a partial agonist for the μ receptor with lower intrinsic activity than morphine.

Pure antagonists such as naloxone and naltrexone are competitive antagonists that bind to and block all opioid receptors.

Central and peripheral effects of opioids

The central effects of opioids are mediated via reduction of pain transmission by stimulating opioid receptors. The opioids activate the descending inhibitory system, suppress the spinal nociceptive impulses, and modulate the pain sensation in the limbic system. Furthermore, opioids have a sedating and hypnotic effect. In addition, they contain anxiolytic and euphoria-inducing components. By inhibiting the respiratory center and the cough reflex, opioids induce respiratory depression and have an antitussive effect.

Patients frequently experience nausea and vomiting at the beginning of opioid therapy, due to stimulation of the ‘vomiting center’ in the area postrema at the floor of the 4th ventricle. Subsequently, however, they inhibit vomiting activity and have an antiemetic effect. Miosis (pinpoint pupils) is often associated with opioid use. This is caused by the stimulation of the Edinger-Westphal nucleus in the midbrain causing the pupillary sphincter (musculus sphincter pupillae) to contract.

Peripheral effects include analgesia, delayed gastric emptying due to pyloric contraction and reduced gastric motility, and increased tone of the smooth musculature of the gastrointestinal tract. In addition, the tone of the bladder muscle and bladder contractor muscle is increased. Histamine release is also common, causing intense itch.

Contraindications to and Interactions with Opioids

During pregnancy and breastfeeding, the indication must be strictly defined.

Interactions between opioids and other drugs

Motility inhibitors enhance the constipating effects of opioids, and cimetidine slows down the break-down of morphine.

Indications for the use of opioids are severe and extreme pain (nociceptive pain), i.e., surgical and tumor-related pain. Opioid analgesics are also especially indicated for the treatment of pain in cases of acute myocardial infarction and acute pulmonary edema because of their psycho-sedative effects.

The World Health Organization (WHO) ladder governing the use of opioids

Dependence and development of opioid tolerance result if opioids are only administered during pain peaks. Therefore, pain management should consist of basic medication with retarding products and on-demand medication with fast-acting agents if pain peaks occur.

Retarding products are frequently applied as patches that are changed every 72 hours. These patches take time to manifest their full therapeutic effect, which continues for up to 16 hours after the patch is removed.

Substances and Their Use with Opioids

Low-potency opioids such as tilidine, dihydrocodeine, codeine, and tramadol are regulated under the Controlled Substances Act and are administered for relief of moderate to severe pain. In comparison to morphine, they have lower efficacy, i.e., they have lower analgesic (relative) potency (RP < 1).

Tramadol has 0.1–0.2-fold higher analgesic potency compared with morphine. However, its most severe side effects are nausea and vomiting, whereas constipation and respiratory depression are rare. The effects of tramadol last 4–6 hours and it can be taken orally or administered intravenously, intramuscularly or rectally.

Dihydrocodeine and codeine have a relative potency of 0.3 and are used as antitussives, because of their strong cough suppressant properties. Its effect lasts approx. 8–12 hours and it is administered orally.

Tilidine has an analgesic potency of 0.2 and its effect lasts approx. 3 hours. Tilidine is metabolized to nortilidine via hepatic conversion. Tilidine is available in fixed combination with the opioid antagonist naloxone.

Upon oral intake of a normal dose of tilidine, naloxone is inactivated by the first-pass effect in the liver and nortilidine is effective. If it is abused via intravenous administration, however, naloxone is effective as the hepatic inactivation of naloxone is delayed. As an opioid receptor antagonist, it prevents the addiction-causing effect as well as the dreaded respiratory depression.

The fixed combination tilidine-naloxone is not subject to the Controlled Substances Act similar to the other low-potency opioids.

Pentazocine and pethidine only mediate postoperative analgesia. Both have a short duration of action and may induce hallucinations. Even though they are mild opioids, they are subject to the Controlled Substances Act.

For patients whose pain cannot be sufficiently relieved by administering oral morphine, continuous intrathecal or epidural morphine administration is indicated. It is applied via a subcutaneous reservoir or a subcutaneous computer-controlled pump. Indications are, for instance, abdominal metastases and pain in the lower extremities with syringomyelia, spinal tumors, and traumatic paraplegia.

As buprenorphine is highly lipophilic, it is well absorbed and is 40 times more potent than morphine. It has, however, poor bioavailability due to its high first-pass effect, which is why it administered parenterally, transdermally or sublingually. Due to its high affinity for opioid receptors, it is resistant to antagonism by naloxone.

Within the context of anesthesia, it is primarily the μ receptor that is responsible for the opioid effects but the κ receptor is also responsible partially. Stimulation of the μ1 receptor leads to pronounced spinal and supraspinal analgesia but also to simultaneous respiratory depression via the μ2 receptor. No pure μ1 agonists have been found so far. Stimulation of the κ receptor induces spinal analgesia and sedating side effects via receptors in the cortex.

Fentanyl, alfentanil, sufentanil, and remifentanil are pure and selective μ agonists that are used for intravenous (as well as total intravenous anesthesia (TIVA)) and balanced anesthesia. They exhibit good analgesic efficacy, low hemodynamic effect, and antagonist action. However, they are not associated with liver or kidney toxicity and do not trigger malignant hyperthermia. Even though they improve the tolerance to endotracheal intubation, they may cause thoracic rigidity, which may interfere with assisted ventilation.

They reduce CO2 sensitivity in the respiratory center leading to respiratory depression, resulting in hypercapnia with a significant increase in cerebral perfusion and intracranial blood volume. Another side effect of opioids is the increased tone of the bronchial musculature resulting in increased respiratory resistance. Other disadvantages regarding anesthesia with opioids include insufficient reflex reduction, postoperative nausea, and the absence of amnesia with a relatively prolonged wake-up phase.

N.B. Fentanyl, alfentanil, sufentanil, and remifentanil are not considered narcotics as they do not induce general depression of neuronal activity.

Treatment of Dyspnea with Opioids in Palliative Medicine

Dyspnea is a common challenge during the terminal stages of many diseases. Opioids may be administered for symptomatic relief. Drugs such as morphine are administered nasally or subcutaneously.

Antagonists are used to eliminate the opioid-induced respiratory depression due to an absolute or relative overdose or in the context of postoperative reversal of opioid effects.

The administration of naloxone should be titrated in order to rule out respiratory depression while maintaining analgesia. There is a risk of tachycardia and an increase in blood pressure. Naloxone has a short duration of action of 30 minutes, after which respiratory depression may recur. Patients must be carefully monitored for a sufficient period of time after the antagonist administration.

Nalbuphine is a mixed agonist-antagonist with its intrinsic activity at the μ receptor that is significantly less than that of pure agonists used for anesthesia. Its analgesic effect, however, is mainly mediated by its agonist activity at the κ-receptors and its duration of action is approx. 2–3 hours.

The triad of symptoms associated with classic opioid overdose includes: respiratory depression with a respiratory rate of 2–4 breaths per minute, coma, and miosis. Immediate treatment is essential in the form of assisted ventilation and titrated administration of the antagonist naloxone.

N.B. Because opioid abuse is frequently combined with alcohol, sedatives or psycho-stimulants, the symptoms may not always be obvious (for e.g., miosis). Naloxone may be used as a diagnostic tool when the cause of toxicity is unknown.

Opiate dependence with withdrawal symptoms develops generally with heroin use but may also occur with prescription opioid use.

Opioid dependence is caused by the development of tolerance. Pharmacodynamic tolerance is based on increased adenylyl cyclase activity. Signs of tolerance include diminished response to the drug as well as the shortened duration of action that is compensated by increasing the dosage.

Withdrawal symptoms are treated with sedating benzodiazepines with long half-life such as diazepam and sedating tricyclic antidepressants. Ultra-rapid detoxification (URD) that occurs under anesthesia with high doses of opiate antagonists such as naloxone and naltrexone is disputed.

For many opiate addicts, replacement therapy may facilitate psychosocial integration, reduce criminal activity for the purpose of obtaining drugs and lower the risk of acquiring HIV and hepatitis following drug use. In most cases, the replacement drug is methadone.

Methadone is a synthetic racemate, and only the L-form is effective (levomethadone). Due to its long half-life of 24–48 hours, there is no typical ‘rush’ effect, and therefore appropriate for replacement therapy.

Levo-alpha-acetylmethadol (LAAM) has an even longer half-life and does not require administration more than 3 times per week. The benefits are fewer fluctuations, which minimize the risk of withdrawal symptoms, and better bridging weekends as daily physician-patient contact is not necessary.

Loperamide does not cross the blood-brain barrier as the epithelial cells immediately pump it back into the blood. Loperamide increases the oscillatory movement of the gastrointestinal muscles and inhibits GI propulsion. Further, it may reduce the loss of enteral fluids.

Loperamide is indicated as a temporary treatment for traveler’s diarrhea, caused by either a viral or bacterial infection. It is not, however, indicated in cases of functional diarrhea due to toxins produced by bacteria. The antidiarrheal effect of loperamide is neutralized by naloxone.

Loperamide is contraindicated in children under the age of 2 years due to central morphine-like side effects in addition to ileus.

Racecadotril, however, is approved for the treatment of diarrhea in newborns, infants, and toddlers. It is administered orally and inhibits the breakdown of enkephalins, thus reducing the secretion of water and sodium in the intestinal epithelium.

Fun fact: Opium tincture used to be the standard remedy for traveler’s diarrhea but is no longer used because of the Controlled Substances Act.