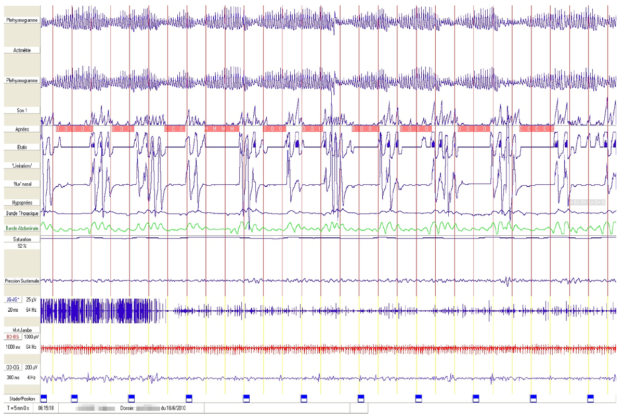 Definition and Categories of Sleep Apnea

Obstructive sleep apnea (OSA) is defined as a repeated cessation of respiration for more than ten seconds during sleep which results in sleep interruption and daytime somnolence.

It is estimated that in the United States, 2-6% of the women and 4-13% of the men, especially in middle age, have sleep-disordered breathing with excessive daytime somnolence. Approximately 50% of the men in a Swiss community sample were reported to have OSA.

This increasing incidence may be partly due to the obesity pandemic, modern lifestyle, improvements in diagnostic methods, awareness about the importance of the disorder and several other factors.

The cause of OSA can be multifactorial, ranging from anatomic neuromuscular factors to associated genetic predisposition. Congenital or acquired craniofacial abnormalities (e.g., micrognathia, retrognathia, large tongue or tonsils, neck circumference >17 inches), aging, alcohol, use of sedatives, postmenopausal status, acromegaly, and hypothyroidism are some of the risk factors associated with OSA. A common risk factor for OSA is obesity, and it often co-exists with hypoventilation syndrome.

Studies have reported EMG patterns in OSA patients suggestive of genioglossus neuromuscular dysfunction similar to denervation–renervation. This may be related to systemic inflammation, intermittent hypoxia or vibrational trauma during snoring.

The majority of patients with OSA are unaware of their symptoms. Often it is their sleep partners and spouses who alert them about their disruptive sleep and apnea. Symptoms may include:

Image: “Illustration of obstruction of ventilation,” by English: Credits to Habib M’henni / Wikimedia Commons – Own work based on: http://topnews.in/health/files/sleep-apnea_0.jpg. License: Public Domain

The diagnosis of OSA is based on a thorough history from the individual as well as their partners, spouses or roommates. The history should include the age and weight of the patient, other medical co-morbidities, daytime sleepiness, and fatigue.

The gold standard for diagnosis of OSA is the polysomnography. It assesses the respiratory, cardiac and sleep parameters of the individual during sleep, either at home or in a hospital.

During sleep, the patient is monitored and ECG-recorded to determine the number of apneic episodes and arrhythmias if any, Other variables such as body position (supine position may predispose to apnea) and limb muscle activity. Restless leg syndrome and periodic lung movement disorder should also be evaluated.

Drug-induced sleep endoscopy (DISE): This procedure is used to evaluate the dynamic upper airway in a sleeping patient with OSA. It is especially helpful prior to surgical intervention to detect the level of obstruction and tailor the surgery for the individual patient.

Radiological investigations like lateral radiographic cephalometry, computed tomography (CT) and magnetic resonance imaging (MRI) which are static tests are not of much value in diagnosing the level of obstruction in patients with OSA.

The severity of OSA can be determined from the Apnea/Hypopnea index (AHI), which is calculated as the number of apneic episodes per hour of sleep. The AHI values can be calculated for the different sleep stages.

If EEG monitoring is used, then the arousal index (AI) can be calculated as the number of arousals per hour of sleep. Although AI can be correlated with AHI, approximately 20% of apneas are not associated with arousals.

The nocturnal hypoxia can be severe enough to cause pulmonary or systemic hypertension, secondary polycythemia, arrhythmias, and sudden death. The all-cause mortality of OSA is significantly higher in untreated patients with moderate to severe OSA.

The aim of treatment is to improve the quality of life and sleep by reducing the apneic episodes during sleep. OSA is considered to be cured when the AHI decreases to below threshold values, i.e., <10/hour of sleep.

The principles of managing OSA include:

Initially, the treatment is directed towards improving the modifiable risk factors such as hypothyroidism, acromegaly, diabetes, obesity, sedatives/alcohol. It is often difficult for patients to lose weight, and the morbidly obese may require bariatric surgery. However, bariatric surgery or weight loss alone is not a cure for OSA.

CPAP or other devices 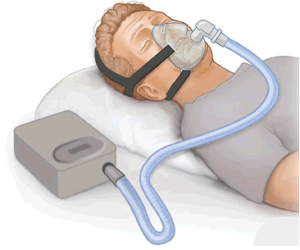 Continuous positive airway pressure (CPAP) is the most effective method for managing OSA. It has been documented to improve sleep symptoms, snoring, cognition, daytime somnolence and quality of life. Unfortunately, most patients find its usage cumbersome, and compliance is often inadequate.

Other devices like the mandibular advancement device, or others which help to pull the tongue forward, are also available and may help to alleviate symptoms in mild to moderate OSA.

The role of surgery in the treatment of OSA has always been controversial. Surgery aims to detect sites of redundant upper airway tissue and then surgically remove it to widen the upper airway. Common sites of airway obstruction are the nose (nasal polyps, deviated nasal septum), macroglossia, low hanging uvula, and enlarged tonsils. Depending upon the level of obstruction, diverse surgeries can be recommended.

In children with OSA, tonsil-adenoid removal is used to alleviate the symptoms.

Uvulopalatopharyngoplasty (UPPP), either conventional or laser-assisted (LAPP), involves removal of the uvula, part of the soft palate and excess oropharyngeal tissue and is combined with tonsillectomy. Although post-procedure there is an improvement in snoring and AHI, the efficacy of the procedure decreases over time.

Maxillomandibular advancement is a surgical procedure recommended for OSA patients with retrognathia or micrognathia. Maxillary and mandibular osteotomies with their advancement help to displace the soft palate and tongue anteriorly, with the resultant widening of the oropharyngeal airway. This is a very effective treatment modality for selected patients.

Tracheotomy is the most effective surgical treatment for OSA but is only recommended for patients with severe refractory life-threatening OSA.

Bariatric surgery is recommended for OSA patients with morbid obesity.

Patient education, highlighting the risk factors and intensive lifestyle changes are important in the management of OSA. Patients should be advised to maintain optimal weight, avoid alcohol, sedatives (especially in the evening) and smoking. It is also important to inform patients about the adverse effects of untreated OSA and improve their compliance by educating them about the nocturnal use of CPAP.

What Is Sleep Apnea? via nih.gov

Upper Airway Stimulation for Obstructive Sleep Apnea: Past, Present, and Future via nih.gov

Obstructive sleep apnoea syndrome and its management via nih.gov