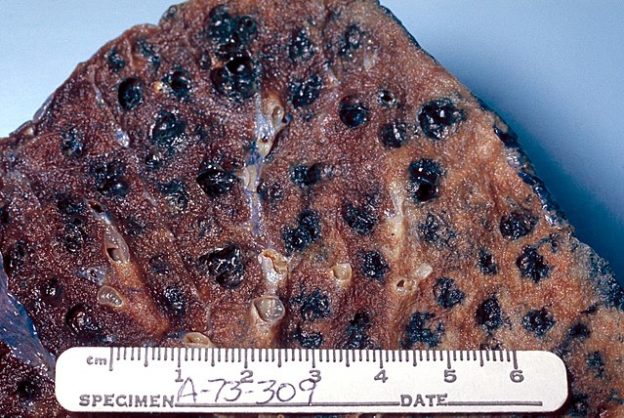 Definition and Background of Emphysema

Emphysema is defined as an unusual enlargement of the airspace that is permanent and distal to the terminal bronchioles, which is combined with the destruction of the airspace walls, without obvious fibrosis.

Normal bronchioles and alveoli look like a cluster of grapes with each alveoli being divided by septae. However, if you have emphysema, you lose your surface area, which means you do not have an effective gas exchange; hence, your diffusing capacity of the lungs for carbon monoxide (DLCO) is reduced.

The part of the acinus that is affected by destruction or permanent dilation decides the subtype of emphysema, which includes:

Of this type, there is abnormal destruction or dilation of the respiratory bronchiole.

This type is defined as enlargement or destruction of all parts of the acinus.

This type results in the destruction of the alveolar ducts. It usually results in spontaneous pneumothorax when patients are affected with this type alone. However, it may occur in combination with other types of emphysema.

International: The prevalence of COPD stage II or higher is 10.1%.

Mortality: There are 64.3 deaths from COPD per 100,000 population in adults older than 25 years in the United States.

Gender: It used to be more prevalent among men because of smoking. However, the difference in prevalence between the two genders is decreasing.

Patients usually ignore their symptoms and adapt themselves to them as they start gradually and progress over the years. These symptoms include:

Observed signs may be different depending on the severity and the stage of the disease. They include:

Congestive heart failure: this disorder might produce wheezing and can be difficult to distinguish from emphysema. However, a history of orthopnea and paroxysmal dyspnea that is nocturnal with the existence of fine basal crackles, and typical findings on upper body radiographs, can lead to the diagnosis of congestive heart failure.

Bronchiectasis: patients with bronchiectasis have chronic production of copious sputum that is purulent, coarse crackles, and clubbing upon physical examination. Abnormal findings on upper body radiographs and CT scans will be observed.

Bronchiolitis obliterans: it is observed in younger persons who do not smoke and in persons with collagen-vascular diseases. A CT scan characteristically shows regions of mosaic attenuation without proof of generalized emphysema.

Chronic asthma: the delayed onset of severe asthma may be hard to distinguish in older patients, but the main difference is the response to bronchodilators and normal diffusion on pulmonary function tests. 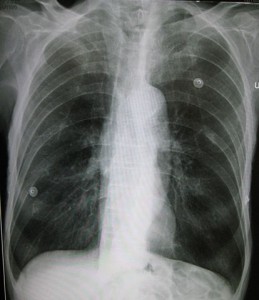 Signs of hyperinflation, such as diaphragm flattening, increased retrosternal air space, and a long narrow heart shadow will be revealed on frontal and lateral chest x- rays. Other signs of emphysema include the hyperlucency of the lungs and rapid tapering vascular shadows. If the disease was complicated with pulmonary hypertension, the hilar vascular shadows become obvious and prominent. You may also notice opacity in the lower retrosternal air space and right ventricular enlargement. 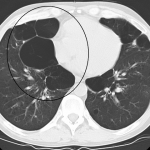 High-resolution CT scans are also used in the diagnosis of emphysema as they are more sensitive than chest x-rays. It is highly specific, and it makes bullae visible and clear, which are usually hard to see on chest x-rays. CT scans are not always done for emphysema patients; however, they are indicated for patients considered for surgical intervention.

COPD is divided into different stages depending on FEV1. The widely used staging system is the Global Initiative for Chronic Obstructive Lung Disease staging system, which is