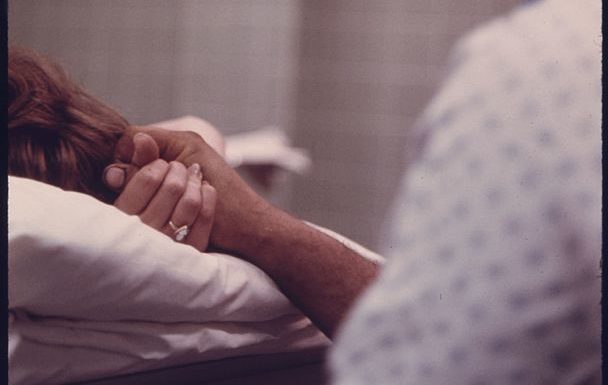 The uterus is a pear-shaped organ consisting of three muscle layers:

A combination of factors initiates labor. Oxytocin and prostaglandins are the most important biochemical factors (hormones) stimulating uterine contractions. The contractions are coordinated in such a way that they begin at the fundus and progress towards the cervix, resulting in effacement and dilatation. The contractions progressively increase, in frequency and duration, until the fetus emerges from the birth canal.

Labor is the progressive dilatation of the uterine cervix in association with repetitive contractions. During labor, subjective changes, including regular uterine contractions that become stronger, longer, and at closer intervals occur, while objective changes, including the cervical changes i.e., descent of the presenting part. Consequentially, there is effacement and dilatation of the cervix and the delivery of the fetus and placenta.

Every woman experiences labor slightly differently, but there are general characteristics. When the uterus begins to contract, labor pains, or contractions, commence.  There are two types of labor contractions: true and false.

True labor contractions occur at regular intervals, steadily increasing in intensity and discomfort. There is a gradual decrease in the intervals between the contractions. Usually, there is discomfort in the lower back/abdominal region, and a vaginal mucous or bloody discharge increases. The contractions ultimately lead to cervical dilatation. These contractions do not cease with rest, hydration or medications.

False labor contractions, also known as Braxton-Hicks contractions, occur at irregular intervals, and they do not gradually increase in either intensity or duration. There are long intervals between contractions. The pain is mainly described as a feeling of tightening in the lower abdominal region. There is no accompanying vaginal discharge and/or cervical dilatation. The discomfort can be relieved completely with rest and medications. 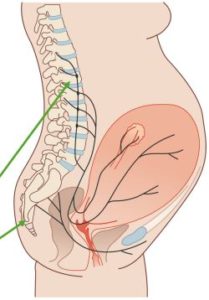 In general, contractions are felt in the lower middle abdomen. Occasionally, they manifest as unrelenting low back pain. They often feel like pre-menstrual cramps and are very common as labor begins.

Nerve Supply of the Uterus

For the upper vagina, the sensory supply is derived from S2, S3, and S4 while, for the lower vagina, it is through the pudendal nerve.

For the perineum, both motors, as well as sensory nerve supply, is derived from S2, S3, and S4 through the pudendal nerve.

There are three hormones that regulate labor contractions: oxytocin, progesterone, and adrenaline.

Managing obstetric pain is essential since it causes discernible stimulation of respiration and circulation in the mother, activating the sympathetic nervous system and causing mental disturbances, such as postpartum depression and post-traumatic stress disorder.

In early labor, pain is largely felt in the abdomen above the pubis, and the epidural anesthetic concentration is low. In late labor, the pain spreads to the perineum and becomes more severe – a higher concentration of local anesthetic may be necessary.

Epidural analgesia does not slow labor or increase the Cesarean section rate. Local anesthetics are not transferred to the fetus, but opiates are and can cause respiratory depression in the fetus.

Psycho prophylaxis implies the parents’ antenatal psychological preparations, intended to minimize, if not eliminate, labor pains. Mother-crafting is a key feature of psycho-prophylaxis, where the mother is educated about the process of pregnancy and labor progression.

Also, the partner is co-educated, which provides emotional assistance to the mother. The mother is also taught relaxation exercises, and an encouraging environment is promoted throughout pregnancy.

Various acupuncture techniques are widely used in China, both for surgery as well as for pain relief, during and after labor.

In this technique, a 25G needle is used to administer 0.1 – 0.15 ml injections of sterile water intracutaneously. It can be administered at either point 1, the posterior superior iliac spine, or point 2,  1 cm medial and 1 – 2 cm inferior. There is sharp burning pain for 20 – 30 seconds, followed by pain relief after 2 minutes, which lasts for 45 minutes to 3 hours. There are no side effects.

Selecting an appropriate analgesic agent is crucial for preventing neonatal asphyxia. The progression of labor has been divided arbitrarily, into early and late phases, to standardize the choice of analgesic agent.

Pethidine has a strong sedative, but weak analgesic, effect. Thus, it has been used in the first stage of labor with regular and uncontrolled pain and discomfort. It is administered as an IM injection at a dose of 1.5 mg/kg and repeated as the effects wane.

Common side effects include nausea, vomiting, and delayed gastric emptying. It also crosses the blood placental barrier to cause depression in the newborn.

Fentanyl’s similar profile is similar to pethidine, but it has limited side effects and rarely affects the baby. However, the drug needs frequent dosing to achieve efficacy.

If the mother is in the active phase of labor and the depressive effects of opioids must be reversed,  naloxone o.4 mg/kg is recommended. In babies born with opioid depression, naloxone at a dose of 10 µg/kg is indicated for resuscitation.

The drug is well-tolerated without vomiting. It also has additional effects of cervical dilatation and managing eclamptic seizures. However, it is avoided in labor since it causes loss of beat to beat variability and fetal hypotonia. Depression from the drug is reversed using flumazenil.

The combination is thought to potentiate opioids, making them effective at  lower, non-toxic doses.

There are various factors that moderate the dose of sedatives, such as fetal maturity, maternal parity, and the mother’s pain threshold. At times, there can be certain complications related to this therapy; known complications include nausea and vomiting, delayed stomach emptying, respiratory depression of the fetus, and neonatal hypotonia. However, these can be managed effectively with  Naloxone (Opioid antagonist), Flumazenil (Benzodiazepine antagonist), Ranitidine (Antacid for gastric symptoms) or use of combination therapy.

Entonox, i.e. 50% nitrous oxide and 50% oxygen, is a commonly used inhalation agent. It can be self-administered by the mother by slow and deep inhalation, which is advised before contractions. Inhalation is stopped as soon as contractions are induced.

However, there are some associated complications which include hyperventilation, altered consciousness, hypocapnia, dizziness. Intra-inhalation monitoring, in the form of arterial blood gas analysis and pulse oximetry, is necessary to start early interventions in case of complications.

Novel continuous infusion pumps have been developed, which can receive patient input and deliver medication on demand. It is a technique wherein the patient herself can administer the drug and can also control the dose.

The agents used here are meperidine, pethidine, and fentanyl. The mother herself can administer the drugs intravenously using a pump. There can be a continuous or intermittent infusion. This method is beneficial since it helps achieve higher maternal satisfaction and, at the same time, eliminates the need for higher-dose narcotics.

There are also fewer unwanted effects, such as motor block, hypotension, and demands on the staff. It gives many parturients a feeling of empowerment.

In this method, electrodes are placed over the region of the spinal cord supplying the uterus i.e., T10 to L1 and S2 to S4. The flow and amount of current are adjusted according to pain severity and threshold. The current that flows helps in limiting, as well as ceasing, neurotransmitter release via synapses. This is a non-invasive procedure which helps reduce dependence on opioid analgesics. Also, there are no associated systemic side effects.

These methods ensure total control of pain, which is rarely achieved with other methods.

It is the gold standard technique for pain control in obstetrics. An epidural needle aids inserting a catheter into the epidural space between L2 and L3. and administering low doses of local anesthetic or opioid combinations to provide a continuous T10 – L1 sensory block during the first stage of labor. It is administered only after the onset of labor. Agents used in this method are local anesthetics; 0.5% bupivacaine or 1% lignocaine. In order to achieve complete analgesia, it is inserted between T10 to S5, while, for a cesarean section, it is inserted between T4 to S1.

When this method is used, the mother is conscious and able to experience childbirth. There is easier control of post-partum pain and a reduced risk of aspiration-related complications. Simultaneously, there is a significant improvement in the newborn’s APGAR score.

Complications: Some complications associated with epidural anesthesia include:

This method can be used at the end of the first stage of labor. It minimizes the urge to bear down before the onset of the second stage. A para-cervical block only reduces the pain of uterine contractions and has no role in relieving perineal pain.

The nerve block uses 1% lignocaine with adrenaline. Bupivacaine is avoided due to its cardiotoxic properties. A 15 cm or longer needle is used to administer the agent in the lateral fornix of the cervix at the 3 o’clock and 9 o’clock positions. A similar procedure is repeated on the other site. This method should be avoided in cases of established placental insufficiency. Fetal bradycardia is a common side effect.

In this technique, there is no effect on the pain from uterine contractions, but perineal pain is relieved. Co-administration is done at the vulva and perineum. It can be administered through trans-vaginal and trans-perineal routes at the ischial spine level. There can be complications, such as injection into vessels, hematoma, or local infection.

This is a preferred method of pain relief during delivery or at the third stage of labor. Hyperbaric bupivacaine, lignocaine, and fentanyl are commonly used agents for the early onset of delivery and morphine is used for pain control.

It is administered in the subarachnoid space between the L3 and L4 vertebrae. For normal or forceps delivery, it is given between T10 to S1 while, for cesarean delivery, it is extended up to T4. In this technique, there is a relatively bloodless field as well as a reduced incidence of fetal hypoxia. Most complications resemble those associated with epidural analgesia.

Some complications specific to spinal analgesia are:

This method is used:

This is a commonly used technique for emergency or elective cesarean section delivery. When this technique is to be used, avoid pre-operative preparation with sedatives or opioid narcotics since these agents may precipitate fetal respiratory depression. Different agents are used for inducing anesthesia, maintenance, relaxation, and post-partum.

The induction agent is intravenous 2.5% thiopentone sodium. The maintenance dose is 50% nitrous oxide, 50% oxygen, and 0.5% Halothane. Vecuronium or atracurium may be used for relaxation. Nitrous oxide, with the concentration increased to 70%, and intravenous narcotics may be used for post-partum. Mendelson’s syndrome is a complication in which there is the aspiration of the stomach contents. There can also be chemical pneumonitis and delayed gastric emptying.

Important precautions during this procedure include:

During elective procedures, a 6-8 hour fasting period is recommended to avoid the risk of aspiration, which may lead to aspiration pneumonitis and Mendelson’s syndrome. There can also be delayed gastric emptying.

Some drugs may pass the blood placental barrier to cause depression in the fetus.

Other agents, such as ether and halothane, may diminish uterine contractions.

The time interval from uterine incision to the delivery of the baby is directly proportional to fetal acidosis and hypoxia.

The longer exposure to the anesthetic agent, the lower the APGAR score.

ACOG Practice Bulletin No. 36: Obstetric Analgesia and Anesthesia via journals.lww.com

Medications for Pain Relief During Labor and Delivery via acog.org

Complementary and alternative therapies for pain management in labour via onlinelibrary.wiley.com

Intracutaneous Injections of Sterile Water over the Sacrum for Labor Analgesia. Ind Journal of Anaes 2009; 53 (2):169-173