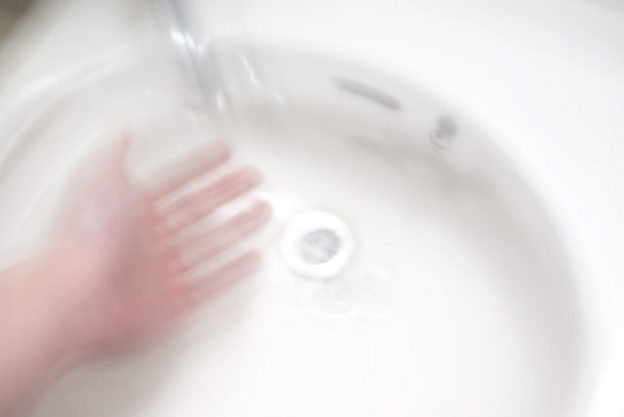 Obsessions are defined as thoughts that are intrusive, senseless, and distressing to the patient, thereby increasing anxiety. For example, people may think whatever they touch will contaminate their hands.

Compulsions are defined as rituals that are performed to neutralize obsessive thoughts. For instance, in response to the obsession in our example above, a person washes the hands again and again. Compulsions tend to lower anxiety, but they are time-consuming and affect an individual’s level of functioning.

The diagnostic criteria for obsessive-compulsive disorder are as follows:

Neuroimaging studies suggest dysfunction in the orbitostriatal area (including the caudate nucleus) and the dorsolateral prefrontal cortex, combined with abnormalities in serotonergic (underactive) and glutamatergic (overactive) neurotransmission. Further evidence of this model comes from an association of OCD with a number of neurological disorders involving striatum dysfunction, including Parkinson’s disease, Huntington’s disease, and Sydenham’s chorea. The latter has also been associated with OCD and tic disorders in the pediatric autoimmune neuropsychiatric disorder associated with streptococcal infection (PANDAS). This is a rare condition in children who have had a group A hemolytic streptococcal infection. Obsessive-compulsive disorder can also follow head trauma.

Most people have the occasional intrusive thoughts, but would ordinarily dismiss them as meaningless. In some individuals, these thoughts develop into an obsession and assume great significance, causing greater anxiety. This anxiety motivates thought suppression and the development of ritual behaviors to reduce anxiety.

Compulsions are repetitive physical behaviors (for example washing hands repeatedly) or mental behaviors (for example praying or calculating in the mind) performed in an effort to neutralize obsessions. The patient may try to suppress the obsession at first but, eventually, cannot resist the compulsion. The goal of compulsive behavior is to decrease the anxiety caused by the obsession or to prevent an unrealistic, anticipated feared event (for example, death) or doing it ‘just to be perfect.’

The obsessions and compulsions are time-consuming and intrusive so that they affect functioning and cause considerable distress.

The types of obsessions and compulsions vary greatly between different patients; however, they are specific identifiable themes, for example:

The frequency and intensity of symptoms vary among patients with obsessive-compulsive disorder. Some patients have mild to moderate symptoms (occurring a few hours in a day) while others have severe obsessions and compulsions (occurring throughout the day).

Patients with OCD tend to avoid people and situations that trigger their obsessions. For example, patients who have obsessions to hit people may avoid going to social gatherings or even outside the home. Avoidance behavior can become very severe and affect an individual’s functioning.

Obsessions and compulsions are associated with many emotions like anxiety leading to panic attacks, distress, depression, emptiness, and uneasiness.

Many patients with obsessive-compulsive disorder hold unreasonable beliefs. For example:

Cognitive behavior therapy in obsessive-compulsive disorder is conducted by exposure and response prevention. In this technique, patients must refrain from carrying out compulsions despite their strong urges to do so. This is called response prevention. If the restraint continues for long enough (usually at least an hour), the urge diminishes. As treatment progresses, these urges are deliberately increased by encouraging patients to enter obsession provoking situations they had previously avoided (exposure).

At first, patients are accompanied by the therapist and reassured while they strive to overcome their obsessions, but with practice, they are able to do this on their own. Sometimes, the therapist reassures the patient on the first few occasions by carrying out the exposure procedure personally, which is called ‘modeling.’

Patients need to feel confident that every task will be agreed upon in advance and that they will never be faced with the unexpected. Response prevention generates substantial anxiety at first, but patients usually tolerate this since they know that it will decline eventually. Obsessive thoughts accompanying compulsions improve as the compulsions are brought under control. Obsessive thoughts without compulsions are more difficult to treat. They can be treated by habituation training or thought-stopping.

This is a form of mental exposure treatment. Patients dwell on the obsessive thoughts for long periods or repeatedly listen to a tape recording of the thoughts spoken aloud for an hour or more.

This is a type of distraction technique in which a sudden sensory stimulus is produced (for example, snapping a rubber band on the patient’s wrist) to distract the patient from the obsessive thought.

Clomipramine (a tricyclic anti-depressant) and the selective serotonin reuptake inhibitors (SSRIs) are drug treatment mainstays. Their efficacy is independent of their antidepressant action, but the doses required are usually higher than those that are effective for depression. Although many patients respond, relapse rates after discontinuation are high.

Three months of treatment with the maximum tolerated dose may be necessary for a positive response. In those who fail to respond, adding an antipsychotic significantly improves outcomes, especially when tics occur comorbidly. Positive correlations between reduced OCD severity and decreased orbitofrontal and caudate metabolism after behavioral and SSRIs treatments have been demonstrated in a number of studies.

Recent studies have suggested that riluzole, an anti-glutamatergic agent, may be effective. Studies also suggest that D-cycloserine (an N-methyl-D-aspartic acid (NMDA) receptor agonist) administered in combination with cognitive behavioral therapy, prior to sessions, may speed treatment response time.

This is a non-ablative surgical technique that involves the electrical stimulation of the basal ganglia by implanted electrodes, creating a ‘functional lesion.’ Although this has had success, often impressively so in refractory cases, issues still remain regarding subject selection and the optimum anatomical targets.

Psychosurgery may be an option in cases of chronic and severe OCD that have not responded to other treatments. Surgical interventions, such as subcaudal tractotomy and cingulotomy, with small yttrium radioactive implants that induce lesions in the cingulate area or the ventromedial quadrant of the frontal lobe, have shown to be effective.

The most common psychiatric comorbidities found in adults with obsessive-compulsive disorder are as follows:

Disorders that occur more frequently in individuals with the obsessive-compulsive disorder than in those without the disorder include:

Obsessive-compulsive disorder is more common in people with certain other disorders, including: