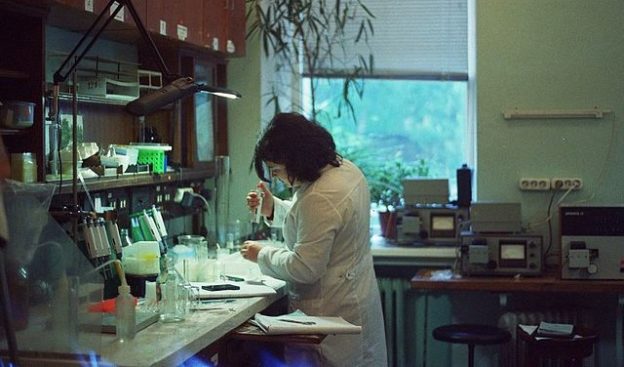 Nucleotides, comprising a deoxyribose (sugar), a phosphate group, and a nitrogen base, constitute the deoxyribonucleic acid (DNA) backbone.

The resulting nucleotide is named accordingly. For example, if the base is adenosine, the nucleotide is known as deoxyadenosine-5’-monophosphate. The nucleotides are abbreviated with the initials of their base, i.e. A, G, C, and T.

Nitrogen bases are grouped into two categories; adenine and guanine constitute the purine category, whereas cytosine and thymine form the pyrimidine class. 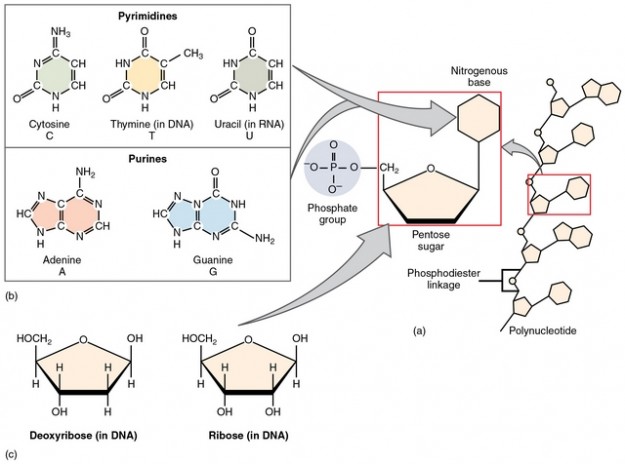 Purine nucleotides are synthesized directly by the addition of a pyrophosphate at C-1 of the ribose sugar. This represents an important difference from pyrimidine synthesis (discussed later in this article), in which the ribose is added subsequently after the complete formation of the pyrimidine ring.

The synthesis of purine nucleotides occurs over multiple steps. During the first step, ribose-5-phosphate is converted to phosphoribosyl pyrophosphate (PRPP), followed by the conversion of ATP to AMP. The enzyme involved in this step is PRPP-synthetase, which is named in accordance with the final product it catalyzes.

The next step is the rate-limiting reaction in the synthesis of purine nucleotides. During this reaction, PRPP and glutamine combine, resulting in the formation of 5-phosphoribosylamine along with the release of pyrophosphate (PP). The configuration on the C-1 atom of the ribose is converted from an α-structure to a β-structure.

Glutamine phosphoribosyl pyrophosphate amidotransferase is the enzyme involved in this rate-limiting reaction. IMP, GMP, and AMP inhibit the enzyme, and consequently, the reaction it catalyzes. The reaction can be re-driven through pyrophosphate hydrolysis.

The third step in the synthesis of purine nucleotides is represented by an ATP-dependent reaction, in which 5-phosphoribosylamine is converted to glycinamide ribonucleotide. The reaction is catalyzed by glycinamide kinosynthase.

In the next step, the nitrogen atom of glutamine serves as an electron donor and a five-membered ring is formed after the removal of a water molecule. Glutamine is thus converted to glutamate.

A CO2 molecule is formed during ring closure. Another nitrogen atom is subsequently added through an ATP-dependent reaction, which, in this case, is provided by aspartate (similar to that in the urea cycle).

Aspartate is converted to fumarate through the loss of ammonia. Alongside this process, another C-1 fragment is incorporated in the 5-membered ring, converting it into a 6-membered ring after the removal of a water molecule. The C-1 fragment is obtained from N10-formyltetrahydrofolate.

The synthesis of AMP is GTP and aspartate dependent. In this reaction, the keto group is replaced with an amino group at position C-6.

Note: Glutamine and aspartate are amino acids involved in the synthesis of purine nucleotides; they serve as N donors and get converted to glutamate and fumarate, respectively. 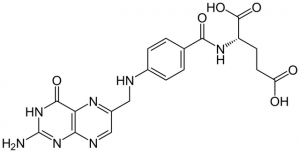 This deficiency is particularly apparent in processes with high cell turnover, e.g., erythropoiesis.

A consequence of folic acid deficiency, in this context, is megaloblastic anemia. In this condition, a malfunction occurs both in DNA synthesis as well as in the nuclear maturation during myelopoiesis, which leads to the appearance of megaloblasts.

Folic acid is composed of p-aminobenzoic acid, glutamine, and pteridine molecules. Folic acid is available in its biologically active form as tetrahydrofolic acid (TH-4), which plays a role in the synthesis of purine nucleotides.

The active form of folic acid functions as a coenzyme in C-1 transmission, in which the groups on the C-1 position are bound to the N atoms at positions 5 and 10 of the pteridine or 4-aminobenzoic acid moiety. The possible groups that can be transferred in this context are methyl, hydroxyl, and formyl groups.

The conversion to the active form occurs via a reaction that is dependent on NADP+ and vitamin C. In the first step, folic acid is converted to 7,8-dihydrofolic acid in the presence of folate reductase; NADPH and H+ are the byproducts.

In an NADPH + H+-dependent reaction, 5,6,7,8-tetrahydrofolate is also generated by a similar process. Tetrahydrofolate synthesis occurs in the presence of dihydrofolate reductase. This enzyme can be inhibited by several drugs including trimethoprim.

The intermediate product of pyrimidine synthesis is initially a ribonucleotide. During this process, the ribose is reduced to 2’-deoxyribose, which can be incorporated into the DNA.

The biosynthesis of pyrimidine nucleotides occurs over multiple steps involving different enzymes. The pyrimidine ring is synthesized first and the ribose sugar is subsequently added to it.

In the first step of pyrimidine synthesis, the carbamoyl phosphate and aspartate react to produce carbamoyl aspartate along with the release of a phosphate moiety. This reaction is catalyzed by aspartate transcarbamoylase.

Note: The key reaction in pyrimidine synthesis represents the reaction between carbamoyl phosphate and aspartate to form carbamoyl aspartate.

Next, dihydroorotic acid is oxidized to orotic acid in the presence of orotic acid dehydrogenase. This enzyme uses NAD+ as a coenzyme yielding NADH and H+ as the byproducts.

Uridine-5-phosphate constitutes the building block of the subsequent reactions. First, UMP is phosphorylated to form UDP, which can be further phosphorylated to UTP. The phosphate group required for this reaction is obtained from the conversion of ATP to ADP.

Following an ATP- and glutamine-dependent reaction, UTP is converted to cytidine triphosphate (CTP) in the presence of CTP-synthetase.

On the other hand, uridine-5-phosphate can be reduced to d-UMP by the action of d-TMP-synthetase (thymidylate-synthase). This reduction is NADPH + H+-mediated. The subsequent reaction catalyzed by d-TMP-synthetase is the methylation of d-UMP to d-TMP. The methyl group that is required for this conversion is obtained from N5,N10-methylene tetrahydrofolate, which in turn is converted to dihydrofolate.

Synthesis of the Deoxy Forms of Purine and Pyrimidine Nucleotides

The final product of the synthesis of both purine and pyrimidine nucleotides is ribonucleotide, which must be reduced further to the 2’-deoxy-form to be incorporated into the DNA.

Degradation of Purine Nucleotides and Bases

Similar to the stepwise synthesis of purine nucleotides, their degradation also occurs via multiple steps. The steps involved in degradation depends on the purine bases (adenosine or guanosine) that are present.

The first step in the degradation reaction is the conversion of the nucleotide to the nucleoside. This occurs through a hydrolysis reaction mediated by nucleotidase. Additionally, a phosphate molecule is lost, which leads to the formation of a free base (purine or pyrimidine) and ribose-1-phosphate. This step is mediated by nucleoside phosphorylase. The degradation of the purine bases, adenosine and guanosine, occurs subsequently.

First, adenosine undergoes deamination in the presence of adenosine deaminase and is converted to inosine. The second step is identical for both inosine and guanosine, in which they are converted to hypoxanthine and guanine, respectively, through an ATP-dependent removal of ribose. Similar to the previous step, this reaction is mediated by nucleoside phosphorylase.

Note: Xanthine oxidase is an iron-bearing flavoprotein that contains a molybdenum atom in its active center.

Another reaction mediated by xanthine oxidase is the conversion of xanthine to uric acid. This step also proceeds via oxidation, where molecular oxygen serves as a means for oxidation. Eventually, the uric acid that is generated is excreted in the urine.

The normal blood uric acid level ranges from 2–7 mg/100 mL. When this level is exceeded, urate crystals are formed, which accumulate in tissues and joints leading to local inflammation or gout.

Poor vascularization and low temperatures promote the crystallization of uric acid, which likely explains why the metatarsophalangeal joint (podagra), cornea, and the lens of the eye are potential sites for uric-acid deposition.

Lesch-Nyhan syndrome is a condition resulting from the complete lack of hypoxanthine-guanine phosphoribosyltransferase. The affected children present a trio of hyperuricemia, progressive kidney insufficiency, and neurological symptoms, for example, a tendency to self-mutilate.

Note: Xanthine oxidase activity can be inhibited using allopurinol during the management of gout.

Degradation of Pyrimidine Nucleotides and Bases

Cytosine and thymine undergo independent degradation pathways in which the reaction steps are identical except for the first step in the degradation of cytosine.

In this first step, cytosine is degraded to uracil by the removal of an amino group. Uracil and thymine are, in turn, reduced to dihydrouracil and dihydrothymine, respectively, via an NADPH + H+-dependent reaction.

β-alanine and β-aminobutyrate are partially further degraded to acetate and propionate, respectively, after the loss of ammonia and carbon dioxide across multiple intermediate steps. The nitrogen atoms resulting from the breakdown are utilized in the urea cycle.

The exact steps involved in recycling are only known for purine bases and are discussed below.

Hurst, D. T. (1980). An Introduction to the chemistry and biochemistry of pyrimidines, purines and pteridines. Chichester: John Wiley & Sons.