Nuclear Tests in Diagnosis of Respiratory and Cardiac Pathology | Lecturio 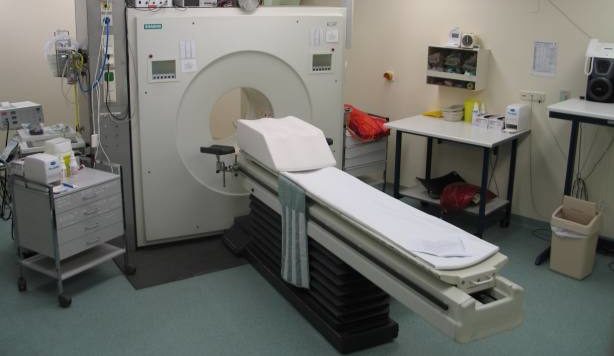 Image: “A typical PET facility equipped with an ECAT Exact HR+ PET scanner. PET scanners such as this are steadily being replaced by systems that combine both PET and CT scanners into a single PET/CT imaging device.” by Jens Maus (http://jens-maus.de/) – Own work. License: Public Domain

Radiographic techniques used in the diagnosis of pulmonary embolisms (PE) and myocardial infarctions (MI) are not limited to X-ray, CT, and MRI. In PEs, a ventilation perfusion scan can be used for diagnosis.

MI and post-MI states can be evaluated using SPECT, PET, Perfusion and MUGA scans. These scans rely on radio-labeled tracers to emit energy that can be viewed using a Gamma camera to generate a very accurate picture of organ health.

Lung scans are often used to diagnose PEs as they require serious medical intervention. PEs result in a change in the ventilation (V) and perfusion (Q) of the lung tissue. PEs are caused most often by thrombi that originate in the lower extremities with the most common sites being the deep veins that travel in the hip and pelvis. 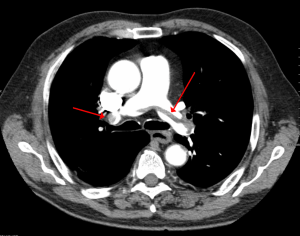 While thrombi are the most likely cause, there are several other sources that can cause a PE that include fat, air, bacteria, amniotic fluid, and tumor. The major risk factors for developing a PE include CHF, obesity, post-surgical, and immobility such as being on a flight.

Signs and symptoms of a PE are tachypnea, chest pain, and rapid onset dyspnea. The most common symptom is dyspnea. Other relevant findings are elevated D-dimer on labs and S1Q3T3 pattern on ECG.

Rapidly diagnosis of a PE can be done using several modalities with the most sensitive and reliable one being the CT pulmonary angiogram (CTPA). For patients who have contraindications to a CTPA, a VQ scan is recommended. Contraindications include having renal impairment that does not allow for contrast to be used. Another common reason is due to pregnancy where radiation is a teratogen.

For USMLE, it is important to know that while D-dimers are seen during a PE; they are only sensitive and not specific, meaning that while they occur with PEs they also occur with many other conditions. If you suspect a PE but the patient does not have an elevated D-dimer, then it is very unlikely that the patient is experiencing a PE and another pathology should be considered. Other causes of an elevated D-dimer can include sepsis, stroke, and renal disease.

Both image sets are compared and if there is a PE there will be ventilation but no perfusion. Oftentimes, there are multiple perfusion defects. V/Q scans are done using a chest X-ray to rule out other pathologies such as atelectasis. Due to the V/Q scan protocol and poorer sensitivity and specificity, a CTPA is a much better choice to rapidly diagnose a PE.

Cardiography can be done using nuclear tests to diagnose cardiac pathology and usually focuses on two areas: ischemia/infarct or with heart failure.

Cardiac ischemia in a chronic form can present as angina which results from luminal narrowing. If the stenosis continues to grow, or if it breaks off and occludes a distal part of the vessel tissues, ischemia will rapidly occur resulting in MI. The most common coronary arteries to occlude are the left anterior descending, right coronary, and left circumflex.

Common symptoms you will see in a patient include retrosternal pain that can radiate to the left arm or up to the neck to the jaw, shortness of breath, diaphoresis, nausea, and vomiting.

ECG is the best way to diagnose an MI with changes normally seen in the ST region for a transmural infarct. On laboratory exam, Troponin I is the most specific marker. Immediate treatment in the ED includes oxygen, aspirin, morphine, and sublingual nitroglycerin.

MI complications can occur during or post-infarct and can have serious morbidity and mortality. Cardiac arrhythmias are very common and you should remember that only ventricular tachycardia and ventricular fibrillation are shockable rhythms. Cardiogenic shock where the heart cannot pump enough blood can occur and lead to death rapidly.

Depending on tissue death, free wall rupture can occur leading to cardiac tamponade. Also, papillary muscles can rupture which lead to valve regurgitation with the most common being the mitral valve. Finally, several weeks after the MI, Dressler’s syndrome can occur which is an autoimmune reaction that leads to fibrinous pericarditis.

For the USMLE, it is important to know the time course for changes in the microscopic level in cardiac tissue related to ischemia. Cardiac tissue undergoes coagulative necrosis which results in the maintenance of cell architecture for a few days.

Heart failure is a condition that can be caused by cardiac ischemia, alcohol abuse, vitamin deficiencies, and drug use. It is usually broken down into two distinct categories of left and right-sided heart failure.

Right-sided heart failure will present with symptoms that include jugular venous distension, peripheral edema, and hepatomegaly. Diagnostics tests usually begin with a chest X-ray and echocardiogram. For an even more accurate picture, nuclear tests can be performed which will allow for a better representation of myocyte health, ventricular function, and ejection fraction. Ejection fraction is measured as the stroke volume divided by the end diastolic volume. The normal range is somewhere around ~60% and the classification for heart failure is when it reaches ~40% or less. 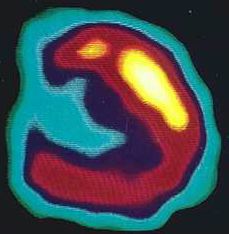 Image: “A SPECT slice of a patient’s heart.” by Kieran Maher – http://en.wikibooks.org/wiki/Image:SPECT-Heart.jpg. License: Copyrighted free use.

Ventricular function studies are most commonly done as a single-photon emission computed tomography (SPECT) test. SPECT tests show signs of CAD and ventricular function. The test uses Technetium-99m to visualize the heart in states of rest and during activity. Viewing the function of the heart during activity can be done with the patient walking on a treadmill or, in some cases, by pharmacological induction. Adenosine is often given to facilitate this.

Positron emission tomography (PET scan) is an imaging technique that utilizes radiopharmaceuticals. The radiopharmaceuticals are usually radio-labeled sugars that can be injected into the bloodstream that then build up in certain tissues and can be used to detect cancer, neurologic disease and activity, and cardiac function. 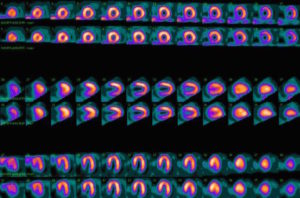 The test uses a radioactive agent such as Thallium to readily uptake into cardiac myocytes. A photon camera is used to take the images of the heart. Areas of a reduced signal are likely due to ischemia or a past infarct. If done with the exercise, this can distinguish areas that are at risk of becoming ischemic.

This labeling of the red blood cells allows for visualization of the function of both the left and right ventricles. This test is useful in the diagnosis of heart failure. Like in many of the other tests, a Gamma camera will record and generate a picture of cardiac function. This technique can give a very accurate EF.

Clinical presentation, evaluation, and diagnosis of the adult with suspected acute pulmonary embolism via uptodate.com

Causes of Elevated D-Dimer via em.umaryland.edu