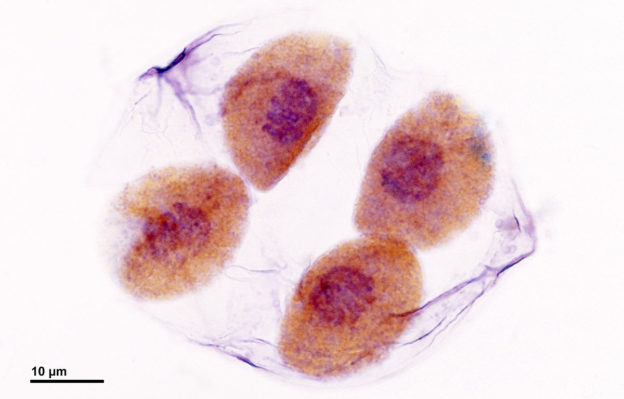 A chromosome is the carrier of genes, the molecules ultimately responsible in carrying forward the hereditary set of information about protein synthesis and, in turn, the functioning of the entire cell.

Every chromosome consists of a pair of chromatids. Similar chromosomes exist in pairs and are termed as homologous chromosomes.

A normal structural human cell carries two sets, 23 pairs of homologous chromosomes, which is 46 chromosomes in total. These are the diploid cells.

The male and female gamete cells responsible for reproduction have only one set of homologous chromosomes, the total is 23 and is termed as haploid cells.

The centromere is the part of the chromosome where the sister chromatids are linked. Through the kinetochore, the spindle fibers attach at the centromere during cell division.

The centromere abscinds each chromosome into two arms: the short arm being called “p” and the longer one the “q” arm. (p for “petit“ in French which means small.)

Based on the location of the centromere, different types of chromosomes are described:

The table shows the various stages of mitosis:

There are two phases of meiosis, namely phase I and phase II.

Reductive division occurs in phase I. Chromosomal crossover, also a unique feature of phase I, leads to an exchange of genetic material between homologous chromosomes. The end result of meiosis is the formation of four genetically distinct haploid cells. Two haploid gametes fusion during fertilization re-establishes the diploid nature of the embryo.

Error in meiosis like nondisjunction is one of the most prevalent causes of miscarriage and developmental disabilities secondary to a genetic cause.

Phase I of meiosis can be summarized as follows:

Phase II of meiosis is identical to mitosis. It involves the separation of sister chromatids along the equatorial plane; thus, at the end of meiosis, four haploid cells are formed.

With this basic insight of normal chromosomal anatomy and cell division, we are fit to progress to nondisjunction.

Failure of proper separation of two homologous chromosomes or the sister chromatids during cell division is termed as nondisjunction.

Time attests to the discovery of nondisjunction in the spring of 1910 at the hands of Calvin Bridges and Thomas Hunt Morgan. They found aberrant chromosomal behavior while studying Drosophila melanogaster sex chromosomes.

Molecular mechanisms behind nondisjunction can be briefly summarized as follows:

Nondisjunction can be clinically identified using a battery of tests as shown in the table below:

The study of nondisjunction reveals links between increasing maternal age and increased chances of recombination. It also provides validation of the chromosomal theory of heredity (Bridges 1916).

Knudson’s 2 hit hypothesis for malignant transformation of cells propagates the existence of a 2-step metamorphosis of the normal cell. While the first hit is supposed to be inborn, the second hit may be caused by mitotic nondisjunction.

The few viable syndromic chromosomal aberrations can be summarized as follows:

Nondisjunction can occur during meiosis phase I or phase II, or mitosis.

There are many tests available to diagnose nondisjunction.

Nondisjunction results in aneuploidy. While most of these chromosomal segregation errors lead to spontaneous abortions in the first trimester, few are compatible with life and lead to variable autosomal and sex chromosomal aneuploid syndromes.