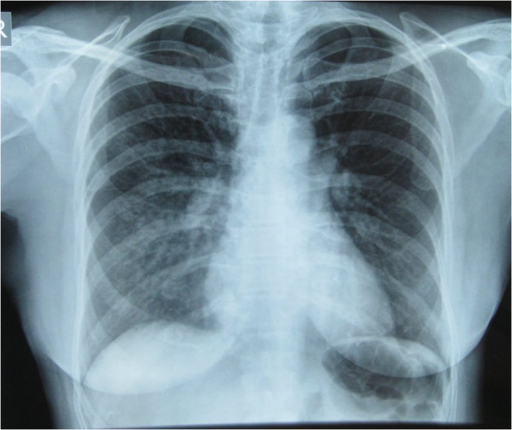 Many conditions can cause non-cardiogenic pulmonary edema. They all share a similar pathogenic mechanism when they cause pulmonary edema, namely, pulmonary capillary increased permeability due to inflammatory mediators.

The most common causes of non-cardiogenic pulmonary edema encountered in the emergency department are:

Patients with non-cardiogenic pulmonary edema frequency have pulmonary hemorrhage as well. This is especially true in case of acute glomerulonephritis-associated pulmonary syndromes such as Goodpasture’s disease or Wegener granulomatosis.

Gadolinium-enhanced MRI can be used to assess the degree of leakage from pulmonary capillaries, however, this is no longer recommended mainly because Gadolinium-based contrasts have been found to be associated with an increased risk of causing non-cardiogenic pulmonary edema themselves and hypersensitive reactions, cardiovascular arrest, and bronchospasm.

The initial imaging modality of choice in a patient with pulmonary symptoms suggestive of pulmonary edema is a chest x-ray. These patients are usually very ill and cannot move. Therefore, a portable chest x-ray is the imaging modality of choice for the initial evaluation.
The combination of the clinical history, physical examination findings, and radiographic features are usually enough to reach a diagnosis and determine the etiology of pulmonary edema.

Unfortunately, portable anteroposterior images of the chest using conventional x-ray are of low quality. Sometimes, it is impossible to differentiate between lung parenchymal diseases and pulmonary edema with this imaging technique.

The main advantage of plain chest radiography is its universal availability because of its accuracy. Additionally, the adequate and systematic examination of chest radiography in a patient with pulmonary edema is usually sufficient in identifying the etiology.

In a patient with a known history of congestive heart failure, a portable radiographic evaluation of the chest should not be relied upon for the differentiation between cardiogenic and non-cardiogenic pulmonary edema. While the treating physician might conclude that the cause of pulmonary edema in the patient is cardiogenic, up to 90 % of the cases were later found to have some sort of acute respiratory failure as the main cause of their pulmonary edema.

These opacities might be patchy, homogenous, mixed, or less likely ground glass in appearance. Air bronchograms are commonly seen on computed tomography scans of the lungs in patients with non-cardiogenic pulmonary edema. Most of these abnormalities are found in the basal regions of the lungs in an ambulatory patient with widespread airspace consolidation.

The main advantage of computed tomography in the evaluation of a patient with non-cardiogenic pulmonary edema due to acute respiratory distress syndrome is the exclusion of lung cysts. Lung cysts are common in patients with this disease and are associated with increased mortality.

The detection of such cysts, which are usually multiple in number, allows for adequate management. In a recent series of 15 acute respiratory distress syndrome patients, computed tomography scans of the chest identified large and multiple lung cysts in five patients.
The management plan was changed in these five patients. Because of this added benefit, some experts are advocating the idea that computed tomography scans should be used more often if possible in patients with acute respiratory distress syndrome.

Patients with non-cardiogenic pulmonary edema typically have a concurrent pulmonary hemorrhage. The sequestration of active neutrophils within the alveoli even in cases of absence of alveolar neutrophils can be detected with FDG-PET (Fluorodeoxyglucose positron emission tomography) scans of the lungs

The advantages and limitations of these methods are challenges for the treating physician for selection of right modalities for the patient.