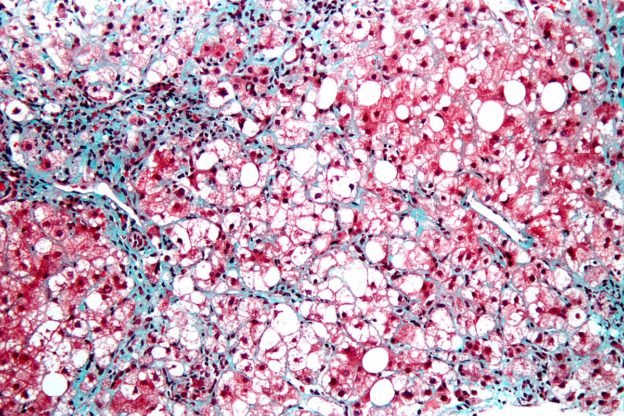 Non-alcoholic steatohepatitis (NASH) is a fatty-liver disease that is not caused by alcohol consumption. The incidence of NASH is closely linked to the incidence of obesity and is increasing worldwide.

A milder form of NASH, non-alcoholic fatty liver disease (NAFLD), is characterized by fatty deposits in the liver without marked fibrosis and inflammation and is believed to be much more common than NASH. NAFLD prevalence is estimated to be 30%, while NASH is estimated to occur in 5% of the population. These numbers make NAFLD and NASH the most common causes of chronic liver disease in the United States.

NASH has been found to be more common in Hispanics and should be diagnosed early as up to 15% of the patients are expected to develop end-stage liver disease (ESLD).

Non-alcoholic steatohepatitis is a consequence of NAFLD. The first pathological change in NASH is macro-vesicular steatosis when lipid synthesis and deposition increases in the liver and interferes with lipid transportation. This is believed to be related to the early insulin resistance that is encountered in these patients. 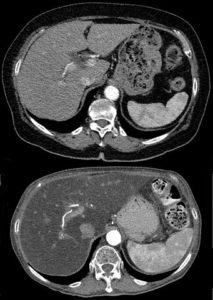 Image: “Comparison of a normal liver and the same liver with steatosis due to chemotherapy.” by Hellerhoff – Own work. License: CC BY-SA 3.0

Once macro-vesicular steatosis happens, free fatty acids become more abundant in the liver and their metabolism puts extra oxidative stress on the liver. This second step of hepatic oxidative stress is also supported by the finding of decreased antioxidant activity in NASH livers and increased endotoxin levels. This oxidative insult is the most important step in the progression from simple NAFLD to NASH and eventually liver cirrhosis.

Different experimental regimens with antioxidants have been found to improve the patho-histological picture in NASH, which supports the role of oxidative stress in the pathogenesis of NASH. For instance, vitamins E and C when taken for six months are believed to markedly improve liver function and histology in patients with early NASH.

Another important pathological change in NASH is leptin insensitivity. Patients with NASH have high levels of leptin, which is responsible for the feeling of satiety after eating, which is also impaired in these patients. Leptin is known to have an impact on hepatic stellate cells which, if activated, can cause hepatic fibrosis.

Clinical Presentation of Patients with NASH and NAFLD

Patients with NASH and NAFLD are asymptomatic in the early stage and are usually diagnosed by the incidental finding of an abnormal liver profile. In advanced disease, patients can complain of tiredness and right upper abdominal pain.

Several points in the past medical history are important to lower the threshold to suspect NASH. History of type 2 diabetes, metabolic syndrome, obesity and dyslipidemia should raise the suspicion of NASH and NAFLD as the etiologies of abnormal lipid profile testing results.
Patients with liver cirrhosis and fibrosis can present with spider telangiectasiae, ascites and easy bruising due to liver synthetic failure. These symptoms are found in all patients with ESLD and are not specific to NASH.

Patients with NASH usually have increased liver aminotransferases levels and dyslipidemia. In patients with NAFLD, there is liver steatosis but without the inflammation or fibrosis found in NASH. This distinction can be made only with a biopsy.

More recently, a non-invasive fibrosis scoring system has been made and validated in the identification of patients with advanced NASH. This predictive model takes into account the patient’s age, body mass index, platelet count, albumin, and aspartate aminotransferase/alanine transaminase ratio to create a likelihood score of having advanced liver fibrosis. 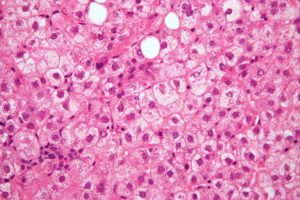 Another important non-invasive distinction between NAFLD and NASH is an alanine aminotransferase (ALT) level that is clearly higher than aspartate aminotransferase.
If a biopsy is performed, three histological findings should be sought to diagnose NASH. Macro-vesicular steatosis, hepatocyte ballooning, and lobular inflammation are the hallmarks of NASH and their presence is essential to make the diagnosis.

Imaging can also add more certainty to the diagnosis of NASH or NAFLD. Transabdominal ultrasonography is the first imaging modality to be used in the evaluation of patients with NASH or NAFLD. Ultrasonography can detect fatty depositions in the liver but is highly operator dependent.

A computerized tomography (CT) scan of the abdomen is also indicated to evaluate the fatty depositions and changes in the liver. Unfortunately, abdominal CT scan is sensitive for NAFLD only when more than 33% of liver parenchyma is occupied by fat.

Magnetic resonance imaging is highly sensitive for detection of NAFLD even in early stages but cannot differentiate between NAFLD and NASH as fibrosis and inflammation are not easy to appreciate in this imaging modality.

Steatosis and oxidative stress are the two main mechanisms involved in the pathogenesis of NASH. Alcohol abstinence, weight loss, and exercise decrease liver steatosis and improve the antioxidative properties of the liver, alleviating the fibrosis process.

Patients with morbid obesity and NASH benefit from bariatric surgery as one study reported an improvement in NASH in up to 80% of the patients who had rapid weight loss after bariatric surgery.

Orlistat, a weight-loss drug, has been found to improve liver profile in patients with NASH and to help patients lose weight and decrease insulin resistance. Orlistat decreases lipid absorption.
Metformin and thiazolidinediones have been found to be very effective in improving the lipid profile of patients with NASH and NAFLD when combined with weight loss and exercise. This effect can be explained by the close relationship between insulin resistance and the pathophysiology of NASH and NAFLD.