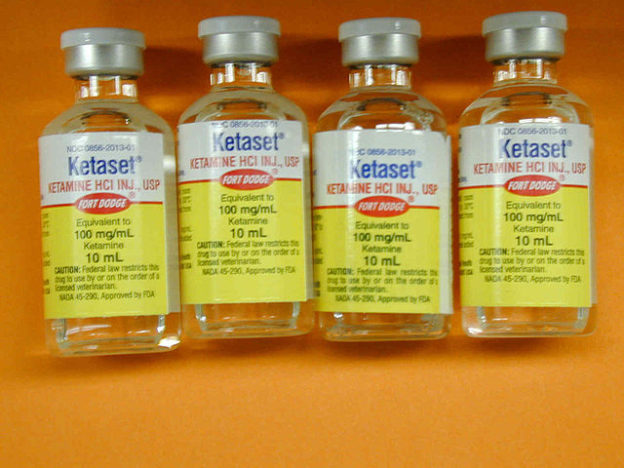 Image: “Ketamine, one of the most common NMDA receptor antagonists.” by Schlonz~commonswiki. License: Public Domain

N-methyl-D-aspartate (NMDA) is an amino acid derivative comparable to glutamate. Glutamate is the primary excitatory neurotransmitter of the brain found in most synapses of the central nervous system. There are several glutamate receptors in the brain. Pharmacological distinction between the different receptors is possible with the help of various drugs, including NMDA.

NMDA is synthetically formulated and selectively binds to the NMDA subtype of excitatory glutamate receptors. NMDA-induced over-excitation is lethal for nerve cells; this reaction led to its discovery as an excitotoxin.

NMDA receptors are 1 of a number of ionotropic glutamate receptors. NMDA receptors have a high affinity for glutamate, a high electrical conductance, and a high permeability for calcium ions and a voltage-dependent block by magnesium ions.

During excitatory neurotransmission, there is activation of glutamate receptors present in the postsynaptic membrane due to the presynaptic release of glutamate. Excitatory postsynaptic potential (EPSP) is then generated.

There are 2 types of glutamate receptors that bring about the generation of EPSP. They include NMDARs and non-NMDARs, i.e., AMPA (a-amino-3-hydroxy-5-methyl-4-isoxazole propionic acid) and kainate receptors.

Whenever synaptic transmission takes place, there is a release of neurotransmitters and resultant rapid depolarization in response to the neurotransmitters because of the non-NMDA glutamate receptors. The duration of the synaptic current is established by the NMDARs.

There are 2 NMDAR types: peripheral and central.

NMDARs have been identified on the unmyelinated as well as myelinated axon of the peripheral somatic tissues. They are associated with chronic pain. These receptors are expressed on nerves in the human tendons, along with an elevated concentration of glutamate; thus, peripheral administration of NMDAR antagonists has various clinical implications, including:

These are of 2 types of central NMDARs: spinal and supraspinal.

After an injury, a series of changes occur in the periphery that lead to peripheral sensitization and hyperalgesia. These are thought to have an associated central component, which is known as central sensitization. In central sensitization, there is amplified dorsal horn excitability. This results in the facilitation of its response to sensory input.

Studies have demonstrated that persistent pain and spinal hyperexcitability occur as a result of activation of NMDARs. The properties of NMDARs in the spinal dorsal horn may be altered due to peripheral inflammation.

NMDARs are also thought to cause supraspinal sensitization. In response to inflammation, there is an induction of neuronal hyperexcitability which, in turn, leads to increased NMDAR activation.

NMDARs have NR1 subunits along with NR2 and NR3 subunits. Whenever the synthesized amino acid binds to an NR2 subunit, activation of the excitatory channel takes place.

NMDARs possess 3 important properties: excitotoxicity, synaptic plasticity, and memory functioning. The induction of these is due to an influx of calcium ions. The damaging effects of NMDA are attributable to an excessive influx of calcium ions across the cell. These range from minor alcohol withdrawal symptoms and schizophrenia to severe, life-threatening epileptic seizures.

NMDAR antagonists are the chemical molecules that target NMDARs. Eventually, this results in deactivation of NMDARs.

NMDAR antagonists are classified according to the mechanism of deactivation:

The blockage of NMDARs by their antagonists is dose-dependent. When the conduction of electrical impulses is considerably diminished, there is a disconnect between the neurons, and dissociation occurs.

Ketamine is a strong dissociative drug. It possesses euphoriant and hallucinogenic properties, making it an exceedingly addictive recreational drug also known as “special K.” The metabolism of ketamine and phencyclidine takes place in the liver and thus their prolonged use leads to the development of a gradual tolerance to the drug.

A probable role of NMDARs in the mediation of pain from internal organs has also been suggested. Studies have found NMDARs on peripheral terminals of the primary afferent nerves that innervate the colon.

Ketamine has been experimentally used for pain originating in the urinary bladder and found to be effective. On administration of intravenous ketamine, a direct inhibitory effect on the cardiovascular as well as visceromotor responses to urinary bladder distention has been seen. Dextromethorphan and memantine also show similar responses, thus suggesting a spinally mediated effect.

A study was conducted to assess spinal cord dorsal horn neuronal responses to urinary bladder distention in acutely spinalized decerebrate rats. The results of this study established that the site of action of ketamine appears to be localized in the spinal cord.

In another study, systemically administered NMDAR antagonists reduced visceral pain due to cyclophosphamide-induced cystitis in rats; thus, the currently available experimental evidence is suggestive of NMDAR antagonists being a useful analgesic in the treatment of visceral pain, such as in irritable bowel syndrome.

Management of Pain by NMDAR Antagonists

Chronic pain has been neurologically linked to the arrest of NMDARs in open configurations, resulting in an over-sensitization of the central nervous system. Hyperalgesia and neuropathic pain follow this excessive excitation. This is where NMDAR antagonists come into the picture.

The actions of NMDAR antagonists are as follows:

Developed in the mid-1960s, ketamine is a PCP and cyclohexamine derivative that possesses a distinctive anesthetic property called dissociative anesthesia.

Dissociative anesthesia is characterized by a dissociation between the thalamocortical and limbic systems. Upon use, it renders patients unconscious and cataleptic (partially conscious).

Depending on the dose administered, patients become unresponsive to purposeful physical stimulation or verbal command. Vital reflexes are usually intact, however. Ketamine thus produces a state between deep sedation and general anesthesia.

Ketamine is the favored drug in emergencies such as major trauma or burns, where patient history is unknown or incomplete. This is because of its ability to minimally depress respiration and circulation while maintaining an appropriate state of analgesia.

Several postoperative benefits have been ascribed to the use of ketamine in place of opioids for the management of pain. These include early ambulation, a lesser degree of postoperative sedation, and a reduced requirement for morphine to treat operative pain.

Methadone is an NMDAR antagonist with a long and variable half-life (8–59 hours). Patient monitoring using an electrocardiogram (ECG) is necessary during the administration of this drug. With higher doses, ECG monitoring for possible QTc prolongation becomes mandatory. It can produce adverse effects such as central nervous system depression, respiratory depression, QTc prolongation, constipation, nausea, vomiting, and disorientation.

Ketamine is primarily used as an induction agent to induce anesthesia in pregnant women. A dose of 1 mg/kg is required to produce this effect. Lower doses (0.2–0.3 mg/kg) are known to produce analgesia and sedation in pregnant women just before delivery; thus, it is used for the management of obstetric pain.

Compared with thiopental, which may produce hypotension, ketamine has no such effect and can be safely used in cases of acute hemorrhage. It should be avoided in women with pre-eclampsia, since it may produce hallucinations and delirium.

Side Effects of NMDAR Antagonists

These compounds have a comparatively narrow therapeutic window. Optimal analgesia can be produced by a cautiously titrated dose, while a sub-anesthetic dose acts as a mild stimulant. Higher doses can lead to agitation, hallucinations, and paranoid delusions.

Ketamine-induced cell death has only been observed in animals, but the consistent and non-medicated use of ketamine and phencyclidine has been shown to result in short-term or even permanent cognitive impairment.

Care should be taken to not use NMDAR antagonists other than ketamine for patients who cannot provide a complete medical history. Amantadine and phencyclidine are known to cause depression of the respiratory center and elevation of the heart rate; thus, careful ECG monitoring and an arterial blood gas analysis are indispensable with their use.

Other Uses of NMDAR Antagonists

NMDARs play a crucial role in memory formation and recollection. Impairment of this receptor with age has been linked to senile memory deficits, the most common being Alzheimer’s disease.

A synthetic NMDA channel blocker, memantine, is currently used for the treatment of Alzheimer’s disease. The glutamate theory of schizophrenia notes the relevance of NMDA receptors overfiring in the etiopathogenesis of schizophrenia.

Although the clinical importance of NMDA receptor antagonists in these cases is clear, an overwhelming occurrence of “psychomimetic” symptoms has limited their use. These symptoms include precipitation of hallucinations, delusion, and personality deficits in schizophrenia patients.

Depression was once thought to be a pharmacotherapy-resistant disorder; thus, only cognitive behavioral therapy was used in the past. Recent studies, however, have established the ability of ketamine to rapidly reverse the symptoms of depression.

This effect is, however, only observed with ketamine. Theories put forward to explain this peculiar phenomenon suggest that the differential affinity of non-competitive NMDAR ligands is responsible for similar results not obtained with other NMDAR antagonists. Ketamine selectively binds to the GluN2B subunit of NMDA receptors; this is how its antidepressant action is achieved.

Other selective positive and negative allosteric site modulators have also shown similar promise. While research continues, several implications of these antagonists are possible for the treatment of these neuropsychiatric conditions.

After certain noxious events, NMDARs induce and maintain neuronal hyperexcitability. The role of NMDARs in pain management is increasing every day. In the past, only central NMDARs were thought to be clinically effective. However, extensive research is being carried out on the use of peripheral somatic and visceral NMDARs in various clinical settings.