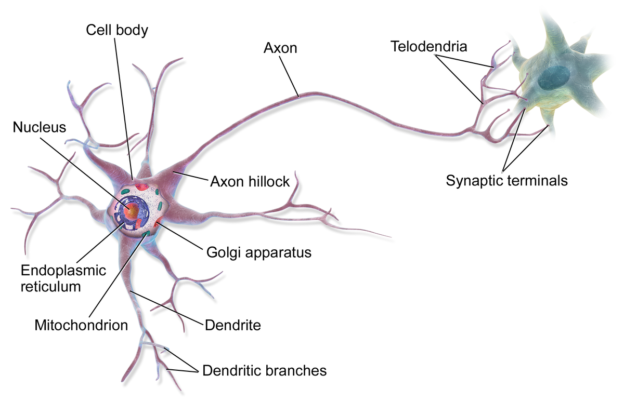 Image: “Diagram of a multipolar neuron.” by BruceBlaus – Own work. License: CC BY 3.0

Structure of a Neuron

A neuron consists of a central cell body which constitutes the nucleus, mitochondria, endoplasmic reticulum, and golgi apparatus. Cell processes which carry the signals towards the nucleus are called the dendrites, while the one which carries the signals away from the cell body is termed as the axon. Axon forms telodendria and synaptic terminals. 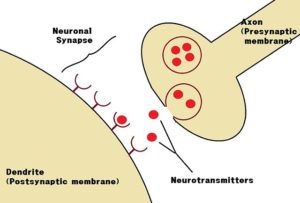 A neuron may terminate into:

A synapse is a structure that allows a neuron to pass a chemical or electrical signal to another neuron. Thus, it can be classified as either electrical or chemical.

In an electrical synapse, the two neurons are connected through charge-carrying ions, which flow between them in the gap junctions. Although it is an unbroken way of transmission of signals, it is essentially either ‘on’ or ‘off.’ These synapses are unregulated. If one neuron is activated via an action potential, the second neuron will definitely be activated. Such synapses are rare in the human nervous system, however, found in specialized locations such as pulp of the tooth and retina of the eye.

The chemical synapse consists of the release of specific chemical substances into the synaptic cleft after an action potential reaches the end of the pre-synaptic neuron. These chemical substances are called neurotransmitters and are contained in vesicles of the synaptic knob, swelling at the end of the pre-synaptic neuron. Chemical synapses are abundantly present in the human nervous system and therefore described in detail below.

Signal transmission across a synapse 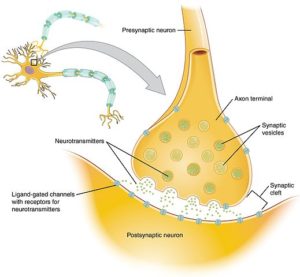 When an action potential reaches the end of the pre-synaptic neuron, it causes specific changes in the cell membrane, which leads to the opening of voltage-gated calcium channels in the synaptic knob.

Calcium ions being in excess amount in the extracellular fluid move down the concentration gradient into the synaptic knob.

The calcium ions cause a release of neurotransmitters in the synaptic cleft. The vesicles containing neurotransmitters move towards the cell membrane, fuse with it and are released by the process of exocytosis.

The receptors are an integral part of specific ion channels on the post-synaptic membrane. Binding of the neurotransmitters to their receptors open up these channels. This changes the ion permeability of the cell membrane.

The conversion of this chemical signal back to an electrical signal requires time, often referred to as the synaptic delay. It is usually about 0.5 – 1msec. As the pathway becomes more and more complex, the total synaptic delay also increases which causes a longer reaction time. The figure illustrates the signal transmission across a synapse. 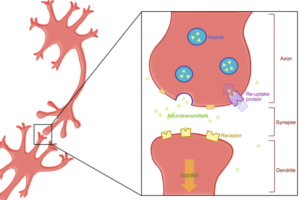 These neurotransmitters are either taken up by the pre-synaptic neuron, to be stored and released for another signal transmission (see figure), or they are inactivated by the enzymes present in the synaptic cleft. The response therefore produced by the neurotransmitters is terminated.

There are two types of synapse depending upon the permeability changes in the post-synaptic membrane. It could either be an excitatory synapse or an inhibitory synapse.

In an excitatory synapse, the sodium and potassium ions are opened up in the post-synaptic membrane. The permeability of these ions increases, however, their net movement depends upon their electrochemical gradient across the cell membrane.

At resting membrane potential, the concentration of sodium ions is abundantly higher in the extracellular fluid, therefore, sodium ions diffuse into the postsynaptic neuron. Potassium ions, on the other hand, are already in excess inside the cell; therefore, only a few of them leak out of the cell as the movement of sodium ions changes their permeability across the membrane.

The net movement of positive ions inside the cell changes the membrane potential to a less negative value. A single excitatory synapse only produces a small depolarization in the post-synaptic neuron and does not reach the threshold value. The action potential in the post-synaptic neuron is only generated if the threshold value is reached when many excitatory inputs are given.

In an inhibitory synapse, the neurotransmitters released to cause the opening of potassium and chloride ion channels. Potassium ions being more abundant diffuse out of the post-synaptic neuron. Chloride ions are abundant in the extracellular fluid, therefore, diffuse into the post-synaptic neuron. This increases the negativity inside the cell and the cell membrane is said to be hyper-polarized.

The hyper-polarization of the cell membrane moves it further away from the threshold potential, thereby minimizing the generation of an action potential in this neuron. 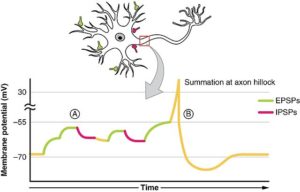 As mentioned earlier, a single excitatory synapse is not enough to produce excitatory post-synaptic potentials. The summation is a process by which several pre-synaptic signals are summed up to produce an action potential in the post-synaptic neuron. Depending upon the number of signals, the magnitude of the response varies. There are two types of summation: temporal summation and spatial summation. 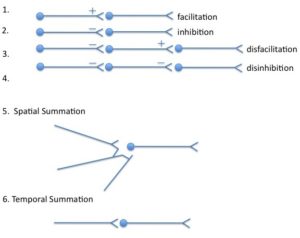 Image: “Interneuronal Relations. Diagram of the basic ways that neurons can interact with each other when converting input to output.” by Bbelai – Own work. License: CC0 1.0

Convergence is the property of neuron in which a single neuron receives input signals from a number of neurons, due to the presence of several dendritic branches.

Divergence is when a single neuron sends input signals to many other neurons. The branching of axon facilitates divergence.

Selective serotonin reuptake inhibitors (SSRIs) are a group of anti-depressant drugs which block the reuptake of serotonin neurotransmitter by the pre-synaptic neuron. Serotonin, therefore, remains in the synaptic cleft for a longer duration of time. This prolongs its effect on the post-synaptic neuron, thereby minimizing anxiety symptoms.

Cocaine, a common substance of abuse, exerts it effects by blocking the reuptake of neurotransmitter dopamine. It competitively binds to the dopamine reuptake transporter, which prolongs the duration of dopamine in the synaptic cleft. The abuser gets a continuous pleasure sensation.

The postsynaptic neurons become desensitized to the level of dopamine and eventually require a greater amount for the generation of an action potential. This explains the strong addiction to cocaine. With prolonged use of cocaine, the number of dopamine receptors is also reduced on the post-synaptic membrane.

Myasthenia gravis is an autoimmune disease in which there is a production of auto-antibodies against acetylcholine receptors on the post-synaptic membrane. These receptors are blocked, causing the failure of muscle contraction.

Patients complain of exhaustion and fatigue as the day ends. The classical symptom is the drooping of the eyelids as the night time approaches. The symptoms are treated with acetylcholine-esterase inhibitors.

Parkinson’s disease is a neurodegenerative disorder in which the production of dopamine is decreased due to the destruction of the cells producing it. This results in symptoms such as hypokinesia, rigidity, dementia, hallucinations, and depression. The disease is treated with levodopa, dopamine agonists and monoamine oxidase B (MA0-B) inhibitors. MAO-B is an enzyme that causes the destruction of dopamine in the synaptic cleft.

Tetanus toxin prevents the release of GABA, an inhibitory neurotransmitter. This results in unchecked excitatory signals to the skeletal muscles which go into spasm. The jaw muscles are specifically affected giving the classical sign of ‘lockjaw.’ As the disease progresses, the respiratory muscles also get involved causing death.