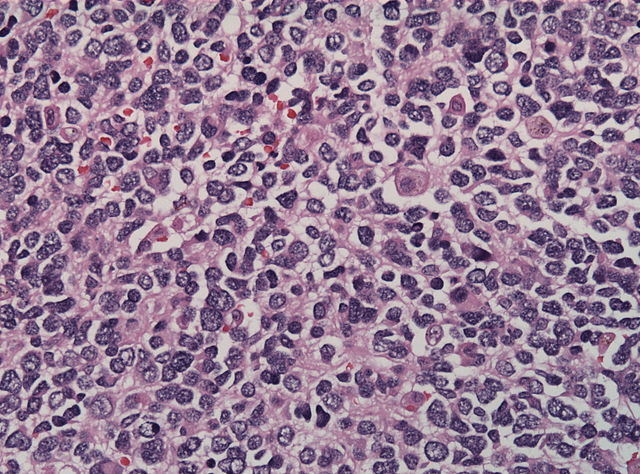 Approximately half of all neuroblastomas will have metastasized at the time of diagnosis, yet the prognosis is promising, and spontaneous remission is common.

Neuroblastoma is one of the most common extracranial malignant solid tumors during infancy and accounts for 10% of childhood cancers. There are about 700 new cases of neuroblastoma each year in the United States, with 90% of patients falling ill before school age. The prevalence is 1 in 7000 children and is second to that of brain tumors.

Neuroblastoma is more common among white children. The disease has a slight male preponderance with a male: female ratio of 1.2:1. The average age of onset is 2 years, but older children may also develop neuroblastoma. Particularly, in infants, spontaneous remissions can occur even with metastatic cancer. 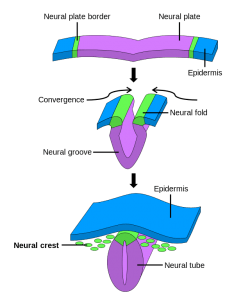 The tumor is thought to be genetic and inherited in an autosomal dominant fashion, with germinal mutation being the main pathologic lesion.

The tumor is believed to arise based on Knudson’s two-hit hypothesis theory where 2 hits in DNA are involved in the causation of the disease.

The distribution of the tumor involves the pattern taken by the migration of neural crest cells because neuroblastoma originates from the cells of the neural crest, which later develop into the sympathetic ganglia and adrenal medulla. The neuroblasts remain in an immature state instead of differentiating, and they mutate into malignant cells. It is assumed that the amplification of the cellular oncogene N-myc contributes to the progression of neuroblastoma.

This amplification, which is observed in 20% of tumors, is the consequence of a 1p-deletion—a loss of the p-arm of the first chromosome. Spontaneous tumor regression does not occur when an MYCN (N-myc) amplification is present. Hence, MYCN amplification has a profound impact on treatment decisions.

About 50% of neuroblastomas develop in the adrenal medulla. Other locations are the cervical, thoracic, and abdominal areas along the sympathetic trunk, with the abdominal cavity being involved in about 70% of the cases.

Note: Neuroblastomas can appear as an hourglass tumor with intraspinal and extradural parts.

Metastases primarily appear in the bone marrow, bones, and locoregional lymph nodes. If metastases appear in the liver, the condition is referred to as the Pepper syndrome. In rare cases, an intracranial metastasis is found.

Typical symptoms can be observed depending on the localization.

Neuroblastoma in the cervical region can provoke Horner’s syndrome, which involves miosis, ptosis hemifacial anhidrosis, and enophthalmos. This arises from the compression and involvement of the sympathetic chain.

Cervical or thoracic localization leads to cough and dyspnea.

An hourglass tumor typically presents with paraplegia and nerve lesions since the tumor infiltrates through the neuroforamina into the intraspinal space.

A protruding abdomen is frequently associated with an abdominal localization. In this presentation, hypertension may arise from renal artery compression and not hormone secretion.

Due to the production of hormones by the tumor, symptoms that indicate sympathetic overactivation, such as arterial hypertension or diarrhea, can occur. This diarrhea is resistant to therapy and is the result of higher secretion of vasoactive intestinal peptide (VIP); although this rarely occurs, it is characteristic of neuroblastoma.

In rare cases (approx. 2%), the neuroblastoma is associated with the paraneoplastic syndrome of cerebellar ataxia, myoclonus of the trunk and extremities, and spontaneous nystagmus (opsomyoclonus). For this reason, it is also referred to as dancing feet and dancing eye syndrome. Occasionally, for unknown reasons, this opsoclonus-myoclonus-ataxia syndrome leaves permanent neurological and cognitive deficits associated with psychomotor retardation even if the neuroblastoma is successfully cured.

If neuroblastoma is strongly suspected, sonographic and radiological imaging of the tumor can help to rule out an hourglass tumor because of the imminent development of paraplegia. 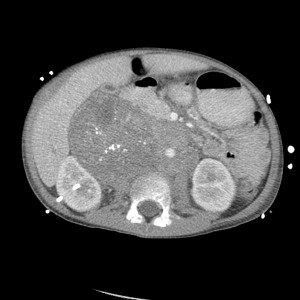 Neuroblastoma can be identified using iodine-131-meta-iodobenzylguanidine (MIBG), which is an analog of noradrenaline because the adrenergic tissue absorbs this substance. Scintigraphy is also a convenient method for assessing the progression of the disease because a reduction in size can be well observed.

Urine can be used to detect higher excretion, while serum is convenient for the detection of a higher concentration of vanillylmandelic acid and homovanillic acid. These are metabolites of the increased metabolism of catecholamines and represent evidence for neuroblastoma since neuroblastoma produces catecholamines (as do the chromaffin cells of the adrenal medulla).

Nephroblastomas and lymphomas are possible differential diagnoses; however, these tumors do not cause an increased level of catecholamine degradation products. Often, nonspecific tumor-associated parameters (such as lactate dehydrogenase, ferritin, and the neuron-specific enolase) are also elevated.

Note: Vanillylmandelic acid and homovanillic acid also qualify as markers for the progression of the disease as their production decreases with atrophy of the tumor.

Importantly, an infiltration of the bone marrow must always be ruled out by confirming the amplification of the N-myc oncogene using tumor material and bone marrow punctures at 4 puncture sites since this would require a different treatment approach.

Histological classification of neuroblastoma according to Hughes

The histological classification of neuroblastoma is made in 3 degrees of malignancy according to Hughes; 50% of all cases are grade 3 neuroblastoma. If the neuroblastoma differentiates by forming numerous mature ganglionic cells, it is called a benign ganglioneuroblastoma. 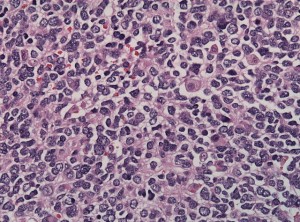 Macroscopically, a dark, sanguineous cross-section with calcifications can be seen. The most common degree of malignancy, the undifferentiated neuroblastoma, does not show any forms of differentiation such as neuropil or ganglionic cells. Occasionally, neuroblasts are arranged in rosette patterns with a neuropil center, known as Homer-Wright rosettes.

The classification of neuroblastoma into 5 clinical stages, according to the International Neuroblastoma Staging System (INSS), is important. More than 60% of children are diagnosed at stage IV. 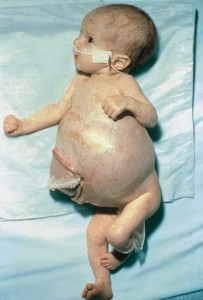 Stage I: Tumor is confined to the organ of origin.

Stage II: The neuroblastoma is localized, but infiltrates the surroundings, yet without infiltrating across the midline.

Stage IV: Hematogenic metastases to other organs are present.

Stage IV-S: The neuroblastoma is detected during early infancy and metastases can be found in the liver, skin, and bone marrow. There are no metastases in the skeleton (better prognosis than stage IV).

Types of treatment for neuroblastomas

The treatment for neuroblastoma depends on the age of onset and the stage at diagnosis. In cases of local foci without MYCN amplification, spontaneous regression of the tumor is not uncommon so that treatment can be temporizing at first. In stages I and II, surgery would be the first step. Surgery is also performed in stage III with combined chemotherapy and possibly radiation. In stage IV, additional 131J-MIBG therapy and an autologous bone marrow transplant become necessary.

Note: The average rate of spontaneous healing in stage IV-S is 80%.

The prognosis in stages I and II is promising, with a cure rate above 90%. In stage III and IV-S, the 5-year survival rate is approx. 60–70%. For stage IV, the prognosis is notably poor.

Follow-up diagnostics and aftercare of neuroblastoma

Follow-up diagnostics include radiological procedures to track a reduction in size and to determine if the patient responds to the treatment. Moreover, the tumor markers homovanillic acid and vanillylmandelic acid can be used to assess the progress of therapy. In aftercare, tumor markers and radiological tests are used not only to rule out a relapse but also to determine the occurrence of any delayed side effects of chemotherapy such as cardiotoxic effects and audiologic damage.

“What are the key statistics about neuoblastoma?” via cancer.org