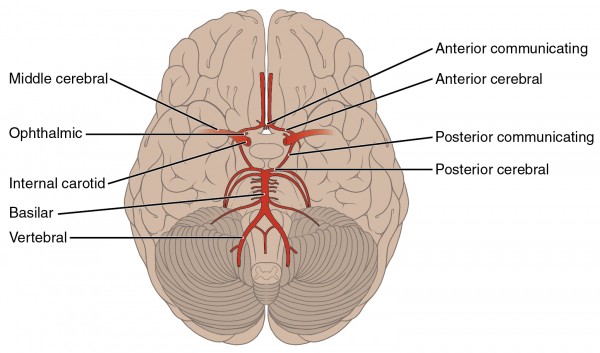 Arterial Blood Supply of the Brain 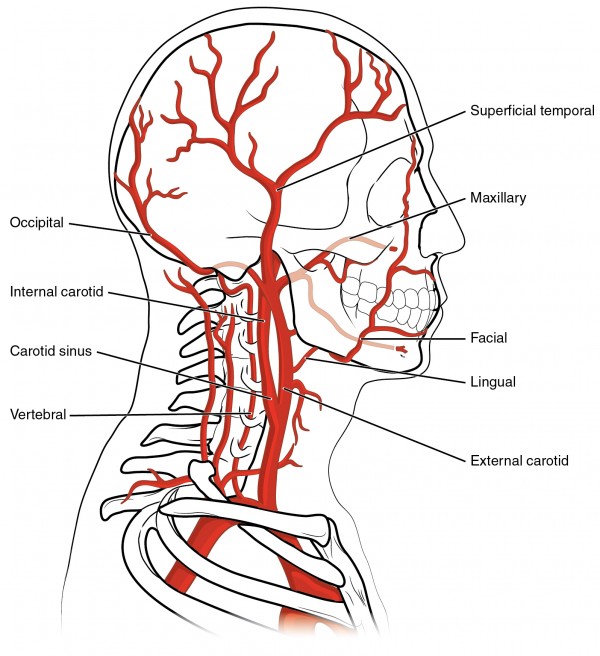 Image: Arteries Supplying the Head and Neck. By: Phil Schatz. License: CC BY 4.0

The internal carotid artery (ICA), on the other hand, has no branches in the cervical region. The ICA is divided into several segments including pars cervicalis (cervical segment), pars petrosa (petrous segment), pars cavernosa (cavernous segment), and pars cerebralis (cerebral segment). Each of these segments, with the exception of the pars cerebralis, has numerous branches. The intracranial portion of the ICA is further divided into 5 segments (C1–C5), terms that are used in clinical practice. The direct continuations of the ICA are the middle cerebral artery (MCA) and anterior cerebral artery (ACA). The ACA is the smaller of the 2 and supplies the medial portion of the hemispheres to the parietal lobe.

The ICA supplies the frontal, parietal and the temporal lobes, as well as the diencephalon. The ophthalmic artery is a branch of the ICA and supplies the eyes and parts of the paranasal sinus.

The PCA can also be divided into 4 segments P1–P4, which are useful for describing the precise localization of a vascular lesion.

Anatomy of the circle of Willis

The anterior and posterior communicating arteries are also clinically important because they are a frequent site for intracranial aneurysms (pathologic vascular dilatations),  which can result in a subarachnoid hemorrhage if the aneurysm ruptures.

It is important to note that there are many normal anatomical variations to the circle of Willis. 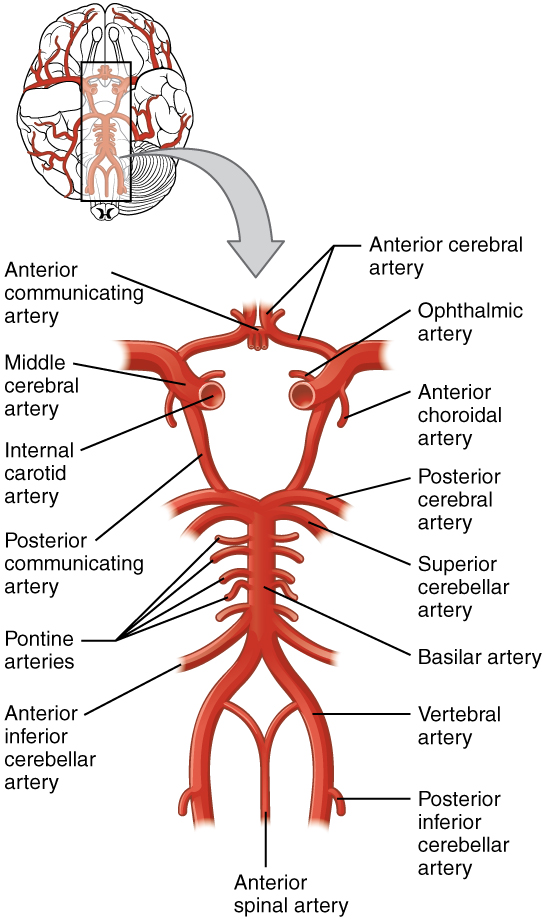 Image: Circle of Willis. By: Phil Schatz. License: CC BY 4.0

Vascular anatomy of the brain

The MCA supplies a large part of the lateral aspect of the hemispheres, including Broca’s area and Wernicke’s areas—the primary motor and sensory language centers respectively. The occipital lobe is supplied by the PCA and includes the visual cortex.  The frontal lobes, the medial portion of the hemispheres, and the superior portion of the parietal lobes are supplied primarily by the ACA. For a detailed view of the vascular supply and corresponding anatomy, please review the image.

Note: The arterial vessels run inside the sulci.

Stroke occurs when there is a disruption of cerebral blood flow and is associated with ischemia in the associated brain tissue. This can occur due to occlusion of a cerebral vessel (ischemic stroke) or due to the rupture of a cerebral blood vessel (hemorrhagic stroke). The clinical symptoms and signs of a stroke depend on which blood vessel and corresponding brain tissue are affected. 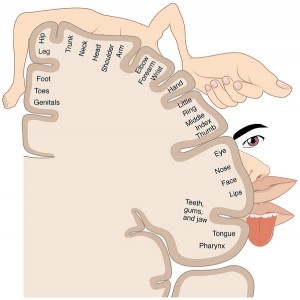 The classical clinical presentation of stroke in the ACA vascular territory includes hemiparesis (i.e. weakness), which involves the legs more than the arms and is always contralateral to the vascular lesion. This is because the anterior cerebral artery supplies the frontal, prefrontal, and supplementary motor cortexes as well as part of the primary motor and sensory cortex. Additionally, occlusion of the ACA can lead to bladder dysfunction. Review of the homunculus may help clarify these details (please see image).

Since the PCA supplies the visual cortex, strokes in this vascular territory will typically result in visual disorders, e.g. in the form of hemianopsia. If the vascular supply to the thalamus is also affected, clinical findings can include sensory deficits (numbness) in the contralateral face, arm, and leg.

Arterial supply of the brain stem and cerebellum

The brain stem and cerebellum are supplied by the basilar artery and cerebellar arteries or branches of these vessels.  The branches are differentiated into medial, mediolateral, and lateral portions, based on their localization and which anatomical territory they supply. The medulla, which follows the brain stem, is supplied, among others, by the anterior spinal artery, a branch of the vertebral artery.

Remember: Veins and arteries in the brain proceed independently of each other.

Venous Drainage of the Brain

The venous drainage of the brain occurs via the superficial and deep venous systems, both of which drain via the dural venous sinuses. Both systems are connected via anastomoses. At the transition of both drainage areas, a reversal of the venous flow is possible. Unlike all other veins of the body, cerebral veins do not have valves.

The superficial venous system includes the cortical veins and the sagittal sinus and drains the cerebral cortex. The major cortical veins are named based on their location and include a superior, middle, and inferior group.  The superior cerebral veins drain primarily into the superior sagittal sinus and the superficial middle cerebral veins into the cavernous sinus. Based on the direction of the drainage, superficial veins that are located laterally can be further divided into ascending and descending veins.

The great cerebral vein (vein of Galen) is an unpaired vein and discharges into the straight sinus. The drainage area of the internal cerebral vein includes the thalamus, striatum, choroid plexus, and septum pellucidum. The basal vein drains blood from the medial and basal parts of the frontal and temporal lobes, insular cortex, and hypothalamus, as well as from the mesencephalon.

The dural venous sinuses are small venous structures that drain blood from the cerebral veins, orbits, and skull into the internal jugular veins. 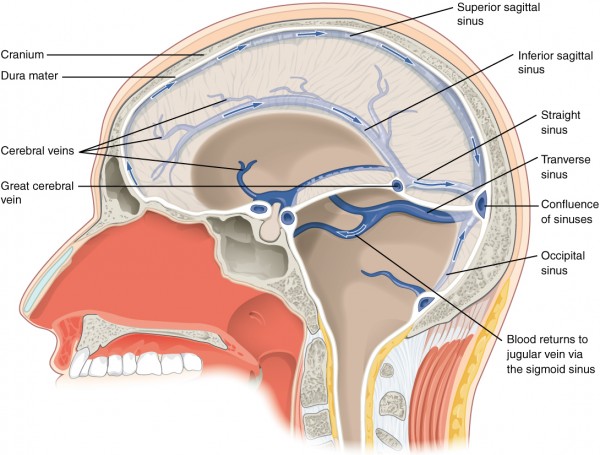 Image: Posterior and Lateral Views of the Neck. By: Phil Schatz. License: CC BY 4.0

Structure of the dural venous sinuses

Classification of the dural venous sinuses

Within the system of dural venous sinuses, there is an upper and a lower group. Both groups are connected to the veins of the vertebral canal, via the marginal sinus and the basilar plexus.

Inlets and outlets of the dural venous sinuses

The main drainage pathway for the dural venous sinuses is the internal jugular veins. There are also accessory drainage pathways, which include the emissary veins, superior ophthalmic vein, marginal sinus, and basilar plexus, as well as the venous plexus of foramen ovale.

Clinical symptoms of a venous sinus thrombosis include headache, nausea, vomiting, and even altered consciousness. These symptoms occur due to increased intracranial pressure resulting from reduced venous drainage.

Additionally, infections can spread via the emissary veins, which form the connection between dural venous sinuses and the extracranial veins, from the scalp to the dura mater, and could lead to meningitis.

Venous drainage of the brain stem

The veins in the region of the medulla and brain stem are connected to the basal cerebral veins. The veins of the brain stem are connected to each other via a longitudinal and a transverse network. Furthermore, there is an infratentorial and a supratentorial venous system. Veins arising from the medulla oblongata, pons, and cerebellum belong to the infratentorial system. The supratentorial system starts at the transition to the mesencephalon. There are numerous anastomoses between the 2 systems.

Venous drainage of the cerebellum