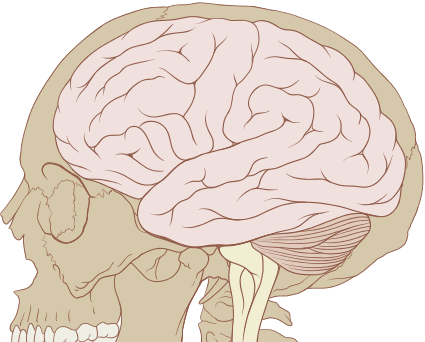 Introduction to the Brain

The brain is the central organ of the human nervous system along with the spinal cord. It is made up of: 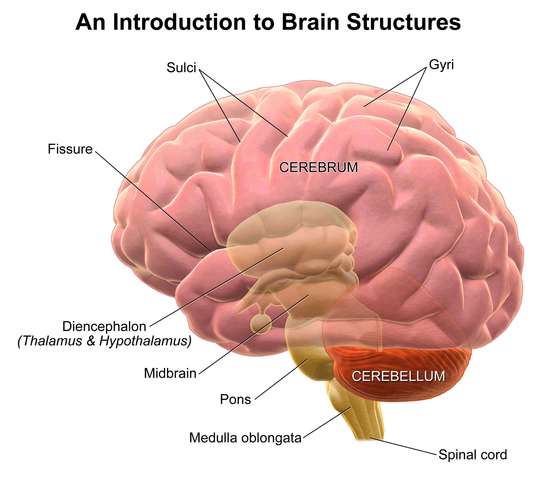 Image: “Introduction to Brain Structures” by BruceBlaus. License: CC BY 3.0

The organ weighs about 1400 grams on average in an adult. It is housed and protected by the skull bones which include the: 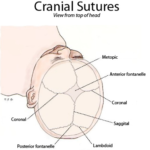 Image: “Cranial sutures shown from the top of the head” by Xxjamesxx. License: CC BY-SA 3.0

It is the largest part of the brain that is divided into the right and left cerebral hemisphere. The two hemispheres communicate with each other via the five commissures mainly through the corpus callosum. 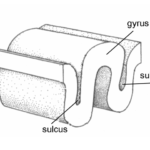 The gross anatomy of the cerebrum involves anatomical and functional organization into a series of grooves and ridges, known as sulci and gyri, respectively. Each has been named differently as follows.
Important sulci include: 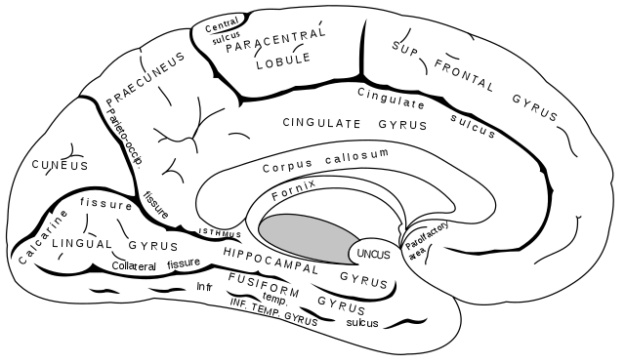 Image: “Brain lobes. Colorings are the same as the left” by BodyParts3D. License: CC BY-SA 2.1 JP

Further division of the cerebrum gives the frontal, temporal, parietal, and occipital lobes of the brain. Microscopically, each hemisphere has an outer grey matter and an inner white matter. The white matter is further split into smaller divisions of the larger neocortex made up of 6 layers and the smaller allocortex made up of 4 layers.

Histologically, the cerebrum is arranged into layers comprising of Schwann cells, microglial cells, ependymal cells, and other types of neuronal cells.

The cerebrum is connected to the spinal cord by the brainstem which is made up of:

The parts of the diencephalon are the:

The brain and spinal cord are surrounded by three layers of membranes known as meninges which are:

These meninges cover the brain and continue to cover the spinal cord to various levels beyond the foramen magnum where they exit. 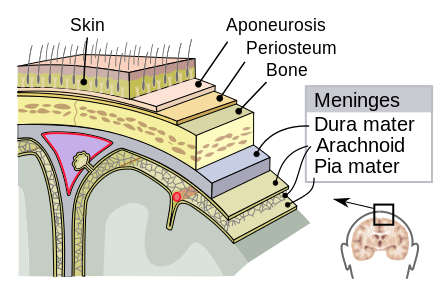 It is the thick outermost layer in relation to the bones of the skull. It has two layers:

It continues to cover the spinal cord beyond the foramen magnum. At various levels, the dura projects into the cranial cavity to form various partitions. These projections include:

The two layers of dura mater enlarge to make up the dural venous sinuses which act as conduits for drainage of venous blood from the brain and its related structures. These sinuses include:

This is the middle avascular membrane that is found in close relation to the dura. It has projections that run into the pia mater.

The extradural space: Which is a potential space located between the dura and its tight adherence to the bones. Pathologically fluid, blood or other foreign bodies may accumulate in this space.

CSF is produced within the cerebral ventricular system, mainly by the choroid plexus. The amount of CSF produced is 450 mL/day in the choroid plexuses. Each of the four ventricles contains choroid plexus tissue which is made up of villous folds lined by epithelium and a central core of highly vascularized connective tissue. Here, active secretion and diffusion produce CSF. 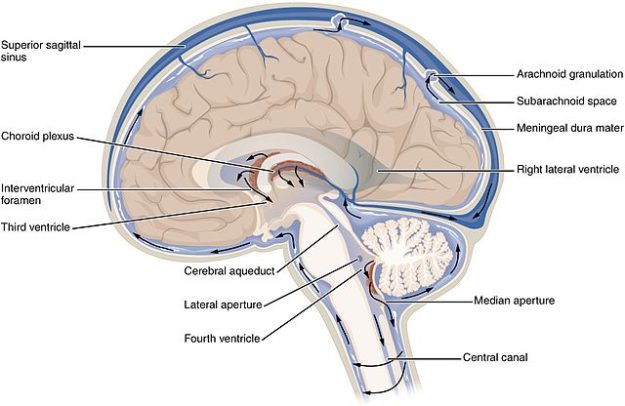 CSF absorption takes place mostly in the arachnoid villi into the venous channels of the sagittal sinus, but the fluid is also absorbed in the ependymal lining of the ventricular system and in the spinal subarachnoid space.

In the normal adult, the total volume of CSF is approximately 150 mLat a time, of which 25% is within the ventricular system. CSF is formed at a rate of 20 mL/h. The CSF production increases with a rise in intracranial pressure up to maximum levels.

Thus, there must be some absorption of the fluid to accommodate the volume of CSF formed each day.

The pathological state of hydrocephalus arises from:

The spinal cord is the anatomical connection between the brain and peripheral nervous system that begins at the foramen magnum as an extension of the brain to the lower margin of the L1 vertebral body in adults. 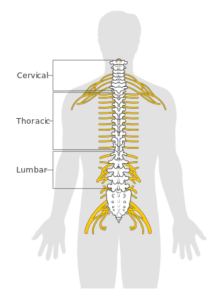 It is located within the bony vertebra which protects it and allows for division of the spinal cord into 31 spinal segments which include:

Each segment has a pair of:

The conical end of the spinal cord is known as the conus medullaris and followed by the spinal canal comprising of the lumbar, sacral, and coccygeal spinal nerves thereby forming the cauda equina.

A cross-section of the spinal cord reveals a central grey matter and a peripheral white matter carrying various pathways of nervous tissue.

Sympathetic nervous system fibers exit the spinal cord between C7 and L1, while parasympathetic system pathways exit between S2 and S4. The sympathetic and parasympathetic fibers supply the bladder, while the motor and sensory fibers below the L2 innervate the perineal region, the lower limbs, and part of the pelvis.