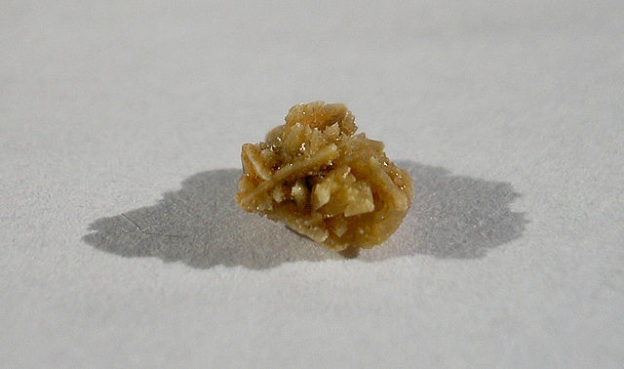 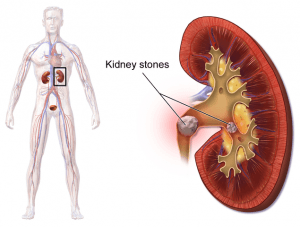 Nephrolithiasis, also called kidney stone or renal calculus is a condition in which stones are formed within the nephrons.

It occurs due to supersaturation and crystallization of inorganic and organic phosphates and acids.

Nephrolithiasis as a Common Disorder

Nephrolithiasis is one of the most common urological disorders, with roughly 2 million patients present annually on an outpatient basis with a stone disease in the United States. It has a prevalence of 12% in males and 7% in females. The recurrence rate is estimated to be 52% at 10 years after the first episode.

Struvite stones, also called triple phosphate stones, are commonly associated with urinary tract infections by the urease-producing bacteria (Proteus). These are more common in females than in males, because there is an increased predisposition of urinary tract infection in females. When a stone is large, branched that fills all or part of the renal pelvis, it is called staghorn calculus. 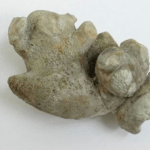 Image: “The stone that removed completely, its weight was 123 grams.” by openi. License: CC BY 3.0 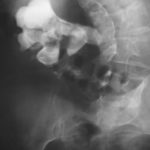 These are characteristically seen in patients with hyperuricemia either due to excessive uric acid production or under-secretion of uric acid.

Cystine stones are seen in patients who have a defective amino acid transporter in the proximal tubule with decreased reabsorption of cystine. It leads to the increased concentration of cystine in the urine (cystinuria), resulting in a formation of pathognomonic hexagonal-shaped stones.

Pathophysiology and Risk Factors of Nephrolithiasis

Supersaturation and crystallization are the two primary factors responsible for stone formation. Multiple risk factors have been identified that promote nephrolithiasis. They have been divided into urinary, dietary, and non-dietary risk factors.

Hypercalciuria: Increased urinary calcium excretion promotes nephrolithiasis. The hypercalciuria may be due to an increase in intestinal absorption, bone resorption or renal loss.

Low urine volume: Decreased urinary volume increases the risk of nephrolithiasis due to supersaturation and precipitation of crystals.

Calcium: A higher calcium dietary intake is associated with a lower incidence of kidney stones. Normally, intestinal calcium binds to the oxalates and prevents the absorption of oxalates into the circulation. Decreased calcium leads to an increased absorption of oxalates, which further predisposes calcium oxalate stones.

Decreased fluid intake increases the risk of nephrolithiasis. It is recommended to have at least 8-10 glasses of pure water daily.

Abdominal pain is the presenting feature of the nephrolithiasis. The pain can be moderate to severe in intensity, colicky and paroxysmal in nature, often associated with nausea and vomiting. The location of the pain is dependent on the site of obstruction. The presence of flank pain, radiating to the groin, is due to the presence of a stone in the lower ureter, while the presence of constant flank pain indicates the presence of stone at the upper ureter or at the ureteropelvic junction. The patients are usually restless and agitated. 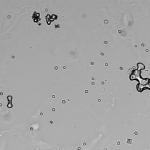 The microscopic urine examination may show characteristic crystals that are formed as a result of supersaturation of the inorganic salts present in the urine.

The urine cyanide-nitroprusside test is positive for identification of cystinuria.

Plain X-ray: Most of the renal stones are radio-opaque and can be seen on plain abdominal X-ray. The notable exception is the uric acid stones that are radiolucent.

Ultrasound: It helps in the identification of the renal stones and accompanying hydronephrosis. 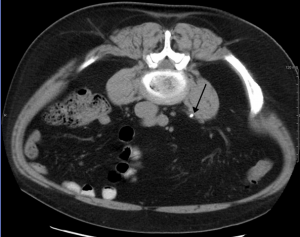 The urine analysis of the stones is recommended to know about the stone type and address the risk factors accordingly.

Acute pain management involves the administration of NSAIDs and opioids. Anti-Emetics drugs are also given.

The specific treatment depends on the extent, nature, and location of the stone. It usually involves a combined medical and surgical approach.

Generally, smaller stones, less than 5 mm, have an increased chance of responding to the medical treatment and most of these stones pass spontaneously in the urine, whereas stones more than 5 mm have a less chance of falling spontaneously.

Medical therapy involves wait-and-watch, increased fluid intake and urine alkalinization. The oral alpha-adrenergic blocker can be administered if the stone is small and located in the lower ureter. These drugs decrease the tone of the urethral muscle and facilitate the smooth passage of the small stone.

Extracorporeal shock wave lithotripsy (ESWL): It is a non-invasive method in which targeted high-frequency ultrasound shock waves are used from outside of the body to break a kidney stone into small fragments. These fragments then pass easily through the urinary tract and out from the body.

Percutaneous nephrolithotomy (PCNL): It is a minimally-invasive surgery in which kidney stones are removed by making a small incision through the skin. This method is used for the stones that are easily approached, located near the pelvic region, and are more than 2 cm in size.

Administration of antibiotics is required to cover the acute infection and maintenance of sterile tract.

The majority of stones pass spontaneously. There is an increased chance of recurrence in patients with nephrolithiasis. Increased fluid intake along with metabolic evaluation is recommended in these patients.

Hospitalization is required in conditions where an obstruction due to kidney stone is associated with urinary tract infection. Emergent surgical drainage is required in the presence of urosepsis and pyelonephritis.

Diagnosis and acute management of suspected nephrolithiasis in adults via uptodate.com