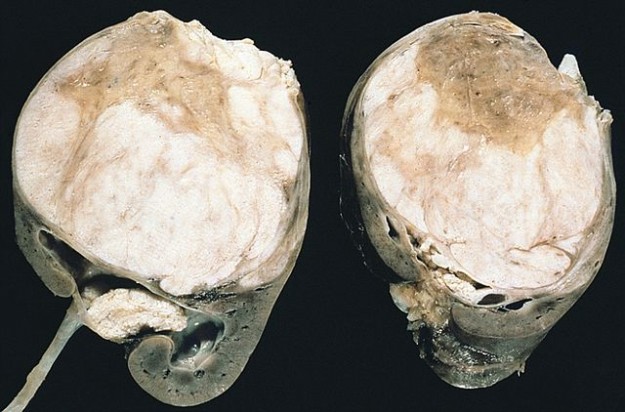 Nephroblastoma or Wilms tumor is the most common renal tumor in young children and is also a common genitourinary malignancy in children.

It develops from the residues of the metanephric blastema. This type of tissue usually disappears before the 36th week of gestation. However, if parts of this embryonic tissue remain, it is referred to as nephroblastomatosis.

Nephroblastomatosis is considered a tumor precursor and can be found in 40% of children with Wilms tumor.

The incidence ratio of Wilms tumor is 1:10,000. Eighty-five percent of patients are usually younger than 6 years. Usually, diagnosis is made in the 2nd or 3rd year of life. Girls are slightly more often affected than boys, and there is a different incidence for children of different ethnicities. For example, the incidence in Asia is substantially lower than that in European or American children.

The genesis of nephroblastoma is much more complex than that of some other malignant tumors in children. About one-third of patients with nephroblastoma have mutations of the tumor suppressor gene WT1: a deletion of genetic material on the short arm of chromosome 11. Other factors influencing tumor development are the loss of heterozygosity and genomic imprinting.

In 5% of cases, the nephroblastoma is bilateral. Metastasis mostly occurs in regional lymph nodes and lungs.

The histological classification according to the SIOP (International Society of Pediatric Oncology) of 2002 identifies 3 groups based on different degrees of malignancy. Eighty percent of cases can be classified as intermediate malignancy, i.e., the standard histological finding.

Typically, blastema is present in the tumor, consisting of clusters of cells with hyperchromatic ovoid nuclei. Within the blastema, different structures can be observed, including rosettes, tubules, and pseudo-glomerular structures. 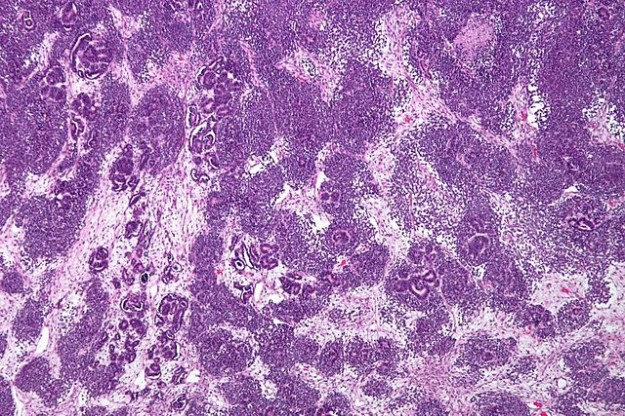 The most common sign of nephroblastoma is a painless swelling of the abdomen. Only about one-quarter of the children complain of pain. In a few cases, hematuria can be observed. Non-characteristic symptoms include:

Approx. 10% of nephroblastoma is discovered only incidentally during a check-up because they are mostly asymptomatic. 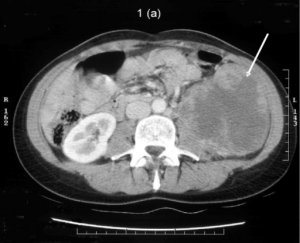 Note: A biopsy is not indicated because of the risk of tumor cell seeding. Specific tumor markers do not exist for nephroblastoma. However, the determination of catecholamine degradation products in serum may be useful in some cases to distinguish possible neuroblastoma. Thus, urinalysis and urine catecholamine levels of vanillylmandelic acid and homovanillic acid should be measured.

Staging of Nephroblastoma according to the National Wilms Tumor Study Group (NWT):

Treatment of nephroblastoma depends on the stage of the disease, histological subtype, and age of the child. Without treatment, the disease results in the death of the patient. Surgical removal of the tumor always involves the risk of rupturing the tumor and seeding into the abdomen, with a subsequently worse prognosis. Therefore, only for children under 6 months is surgery the primary mode of treatment.

For older children, the reduction of the tumor mass using neoadjuvant chemotherapy using agents such as vincristine and actinomycin D is the 1st step, with the goal of reaching stage I before surgery. For tumor patients with stage III or higher, radiation therapy becomes necessary. Radiation is delivered to the tumor bed after surgery and chemotherapy to eliminate residual disease. In the case of unilateral nephroblastoma, tumor nephrectomy is the next step.

Prognosis is very good. The 5-year survival rate is 80%; for stage I patients, it is even higher at 90%.

During treatment, it is important to be aware of the possible presence of sinusoidal obstruction syndrome (formerly called veno-occlusive disease) affecting the small hepatic veins. It is a common side effect of the cytostatic drug actinomycin D, which represents the key substance in chemotherapy for nephroblastoma. For follow-up surveillance, abdominal sonography is a suitable method as it avoids further exposure to radiation.

To rule out any lung metastases, it is imperative to periodically perform X-ray of the lung. In the long term, special attention has to be paid to any growth disturbances in the skeleton and soft tissues, which could be a consequence of radiation.