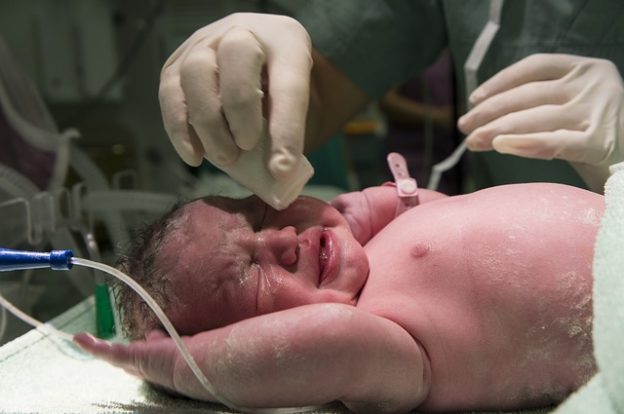 Most infants make the transition between intra- and extra-uterine conditions well; however, approximately 10% of infants require intervention at birth, with 1% requiring extensive resuscitation at birth.

Transient Tachypnea of the newborn

Transient tachypnea should be considered in any infant with tachypnea. This is a common situation, especially in infants born via Cesarean section (the majority of cases are in the United States). The condition is caused by a failure of fetal alveolar fluid to clear the airway, resulting in respiratory distress in the infant. The condition usually resolves within the first 24 hours of life and is insignificant in nature. The chest x-ray shows retained amniotic fluid, which can cause perihilar streaking in the interlobular fissures. Therapy can be administered and is usually continuous airway pressure (CPAP) or oxygen, depending on the attending physician’s preference. This treatment usually resolves the condition.

An overview of resuscitation

Guidelines are recommended by the American Heart Association (AHA/AAP/ILCOR 2015 guidelines). Progression from one step to the next in the guidelines is determined by the response of the infant. Wait 60 seconds to evaluate the effect of any intervention that is performed. Remember—do not just proceed with the list. Assess the infant, ask, and determine whether he or she has improved. During the assessment, review the respiratory status. Check for apnea, gasping, effort breathing, etc. Check the heart rate: Is it above 100/min? The four steps of neonatal resuscitation include the following:

It is important to maintain the temperature in the infant. Hypothermia in the delivery room is associated with an increased probability in mortality, and this must be prevented at all costs. Infants born preterm or who are underweight are particularly susceptible to hypothermia, and this must be taken into consideration. Listed below are the appropriate steps for maintaining the infant’s temperature in the initial stabilization phase:

Keep the infant’s neck in neutral or a slightly extended position. This will allow the airway to open. Place a towel under the infant’s shoulder to help with the extension of the neck and the opening of the airway.

With apnea or a heart rate below 100/min, administer positive pressure ventilation using a bag and mask. To initiate bag-mask ventilation (requires practice), follow these steps:

If the heart rate is below 60/min despite 30 seconds of positive pressure ventilation, apply chest compressions and give oxygen. CPAP can be effective in helping the infant breathe. This is best used in very premature preterm infants who have a significant risk of respiratory distress syndrome.

Intubate the infant if the bag-mask is ineffective or if chest compressions are required. The intubation will allow access to the trachea and can be used to successfully deliver positive pressure ventilation.

Chest compressions are required (as mentioned previously) if the infant’s heart rate remains below 60/min despite adequate ventilation for 30 seconds. Two techniques are used for infant chest compressions: the thumb technique and the two-finger technique. Both are outlined below:

Administration of epinephrine or volume expansion

Drugs should not be routinely used and are considered a last resort. If, however, the heart rate remains below 60/min after consistent attempts at resuscitation, medication may be needed. Treat with epinephrine if the heart rate continues to be below 60/min. The easiest access route in an emergency situation is via the umbilical vein. Insert the cannula 2 to 4 cm deep. Even though there is little data on the effectiveness of epinephrine, it is widely used.

Administer normal saline or a blood transfusion if blood loss is suspected. Intubation for meconium is no longer recommended.

When should resuscitation be stopped?

It is rarely mentioned in medical textbooks when resuscitation attempts should be discontinued; however, it is an important topic. Usually, if there are no signs of life after 10 minutes of resuscitation attempts, then it should be stopped. Research suggests that after this point, high levels of mortality and morbidity occur in infants, and thus, the benefits do not outweigh the harm done. Remember, with hypoxia, irreversible damage can occur in a matter of minutes in major organs such as the brain, and can lead to lifelong complications.

Measure the Apgar score (developed by Virginia Apgar) at 1, 5, and 10 minutes. The scores are NOT used to guide resuscitation. They are, however, a good general marker of the success of a team’s resuscitation attempts. The score is determined using 5 categories: heart rate, respiratory effort, muscle tone, reflex irritability, and color. The Apgar score predicts neonatal and infant death.

If an infant does not respond to resuscitation attempts, the following approach can be taken to ascertain the cause:

With no response to positive pressure ventilation, consider a mechanical block. The infant may have meconium or excess mucus in the airway that needs clearing. He or she may also have a malformation of the pharyngeal airway that does not allow gas transport down the trachea. Infants who do not respond to positive pressure ventilation may have a lung function problem (e.g., a pneumothorax or significant pleural effusion, etc.).

If the infant appears to have central cyanosis, consider congenital heart disease. If there is consistent bradycardia or slow heart rate, consider a heart block. If the child is totally apneic, consider hypoxia of the central nervous system (CNS). The infant may also have some congenital neuromuscular condition. Also, if the mother was given opioids for pain relief at any period, then consider opioid-induced respiratory depression.

Infants in need of extensive resuscitation are likely to have complications if they do survive. Consider sodium status, glucose levels, CNS complications (e.g., hypoxic brain injury can lead to a whole host of problems in the newborn), hypotension (think shock), hypocalcemia, and issues with feeding. The longer the duration of the resuscitation process, the more likely an infant will have significant complications. Intensive care may be needed for close monitoring of some infants.