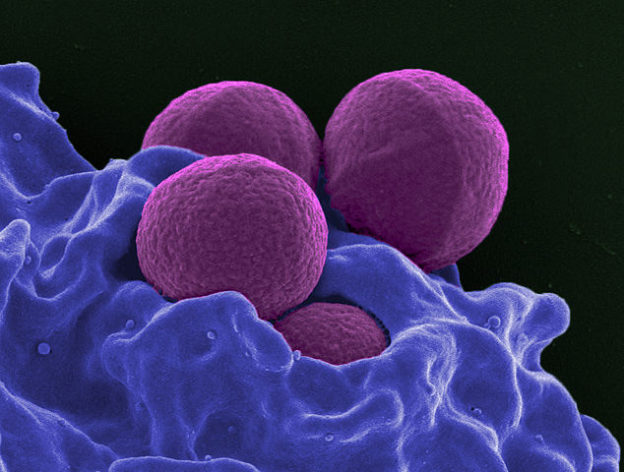 Aminoglycosides have played a major role in antimicrobial therapy since their discovery in the 1940s. The first aminoglycoside, the antibiotic streptomycin, was isolated from Streptomyces griseus. Today, streptomycin is widely used for the treatment of tuberculosis.

The effect of these antibiotics is based on an irreversible binding to the 30S subunit of the ribosome complex and, thus on the inhibition of protein biosynthesis. Aminoglycosides attack rapidly multiplying organisms but also kill dormant bacteria. 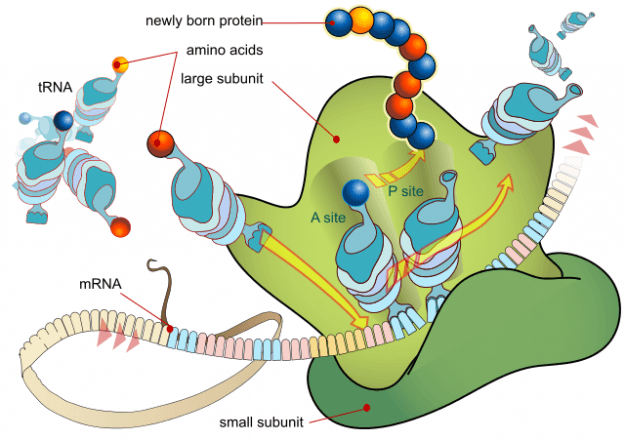 The oral absorption of aminoglycosides is poor. Effective, clinically relevant concentrations are not achieved in respiratory secretions or cerebrospinal fluid (CSF). Aminoglycosides are eliminated via the kidney. Adjustment of aminoglycoside dosage is needed in patients with renal failure.

Aminoglycosides are contraindicated in pregnancy or deafness, as aminoglycosides accumulate in the endolymph and perilymph of the inner ear. Aminoglycosides also exhibit a significant post-antibiotic effect, which means they persistently suppress bacterial growth even after the bacteria experience only a brief exposure to the antibiotic.

Note: Rapid intravenous injection of aminoglycosides can cause neuromuscular transmission disorders or even neuromuscular blockade and respiratory failure.

Aminoglycosides are effective against enterobacteria and pseudomonas. Many other bacteria such as enterococci, streptococci, and legionella are resistant to aminoglycosides. 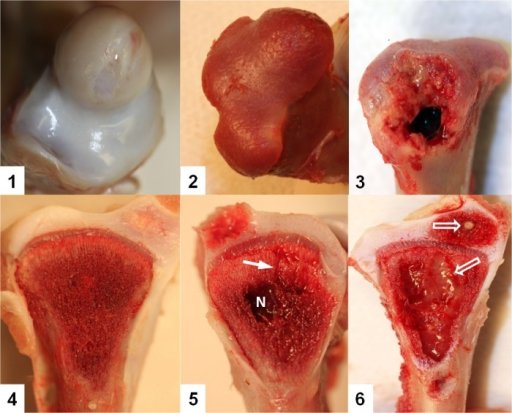 Tobramycin is currently the only aerosol antibiotic approved for the long-term treatment of chronic infections caused by P. aeruginosa in patients with cystic fibrosis and chronic obstructive pulmonary disease. 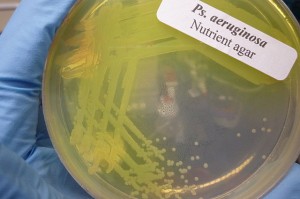 Topically applied aminoglycosides, for example, neomycin and kanamycin, are used for treating skin and mucous membrane infections caused by staphylococci and enterobacteria. Gentamicin is also successfully used against bone and soft tissue infections in prosthetic surgery. It is locally applied in the form of gentamicin-loaded PMMA beads or gentamicin bone cement.

Macrolide antibiotics all contain a lactone ring. They have poor chemical stability in aqueous solution (acid-labile) and also have a very unpleasant, bitter taste, which is why they are usually present in the esterified or galenical form. Macrolides are administered as enteric-coated tablets because intravenous administration is poorly tolerated.

Macrolides target bacterial protein synthesis by inhibiting ribosomal translocation. Macrolides are bacteriostatic antibiotics and are effective against many strains of Gram-positive bacteria such as streptococci and clostridia.

Because macrolides are able to penetrate host cells, they can also target intracellular pathogens, for example, Chlamydia, Bordetella pertussis, and Legionella. Only in CSF are insufficient concentrations of macrolides noted. Macrolide antibiotics and their active metabolites are excreted mainly in the bile.

Macrolide antibiotics may cause gastrointestinal side effects and intrahepatic cholestasis, which is why they are contraindicated in liver disease.

Note: With the exception of azithromycin, macrolides inhibit cytochrome P450 CYP3A4, affecting drugs such as digoxin, midazolam, and theophylline by interfering with their metabolism, i.e. by decreasing the rate of their clearance. 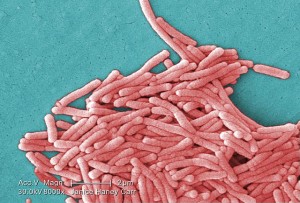 Moreover, erythromycin is most effective in the treatment of campylobacteriosis. 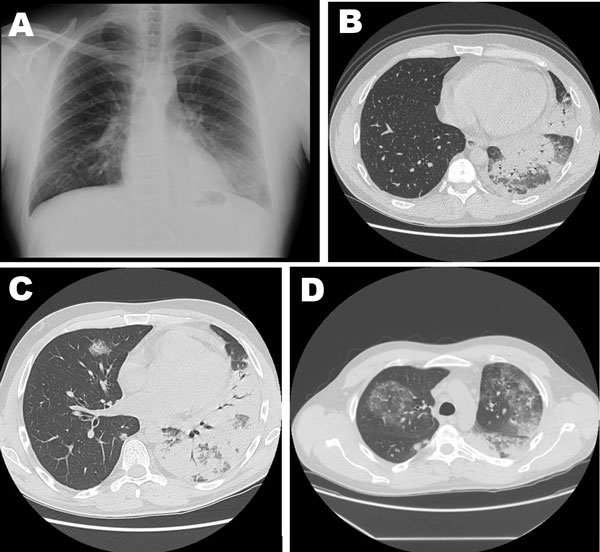 Roxithromycin is an antibiotic used in the treatment of respiratory tract infections including pneumonia, in addition to skin and soft tissue infections. Its pharmacokinetic properties are better than those of erythromycin.

Azithromycin and clarithromycin are semisynthetic analogs of erythromycin and have better oral absorption and a lower side-effect profile. Clarithromycin is used mainly in combination with other antibiotics for the treatment of Helicobacter pylori infections and for the prophylaxis of B. pertussis infections.

Telithromycin is also a semisynthetic erythromycin derivative. It belongs to a new chemical class of antibiotics called ketolides. It targets enterococci and macrolide-resistant pneumococci, which is why telithromycin is used in the treatment of respiratory infections caused by macrolide-resistant strains of bacteria. This drug has many side effects such as QT prolongation, CNS disorders, and liver failure.

Doxycycline is the most frequently prescribed tetracycline. It is bacteriostatic and inhibits protein synthesis. It prevents the attachment of the tRNA to the 30S subunit of the ribosome. Doxycycline is most effective against obligate intercellular parasites such as chlamydia and rickettsia.

Doxycycline can be administered orally or parenterally. However, many foods such as milk and iron products interfere with doxycycline, making it less effective by markedly reducing its absorption rate. Tetracyclines can cross the blood-brain barrier to some extent.

Tetracyclines are predominantly metabolized in the kidneys. In patients with renal impairment, this may lead to the excessive accumulation of the antibiotic and can potentially cause hepatic damage. Common side effects include gastrointestinal disturbances and photosensitivity.

Note: Tetracyclines may cause false-positive urinalysis results, for instance, those indicative of glycosuria.

Tetracyclines are contraindicated in pregnant women and children because they have chelating effects on calcium, which may cause discoloration of teeth, increased susceptibility to caries, and delayed bone growth.

Many bacteria such as streptococcus, clostridium, Enterobacteriaceae, and gonococcus are resistant to doxycycline. The bacteria have efflux pumps that remove the antibiotic from the bacterial cell. A decline in tetracycline resistance has been observed because tetracyclines are no longer used in the production of meat.

Metronidazole and other nitroimidazoles are prodrugs, activated within the microbial cell by oxidoreductases under anaerobic conditions. Metronidazole is a bactericidal antibiotic active against anaerobic bacteria and select parasites. Its mode of operation is not fully understood, but it is believed that nitroimidazoles produce short-lived free radicals that are cytotoxic and can interact with and harm bacterial DNA.

Metronidazole is well absorbed and distributed after oral administration, reaching high, effective tissue concentrations in the brain, uterus, liver, and abscess cavities. Metronidazole is indicated for the treatment of infections caused by protozoa and obligate anaerobes, such as bacterial vaginosis and Clostridium difficile-associated diarrhea.

Metronidazole is used for perioperative antibiotic prophylaxis. It is oxidized and conjugated in the liver and partially excreted in the urine. It is contraindicated during pregnancy and in patients with severe hepatic disease. 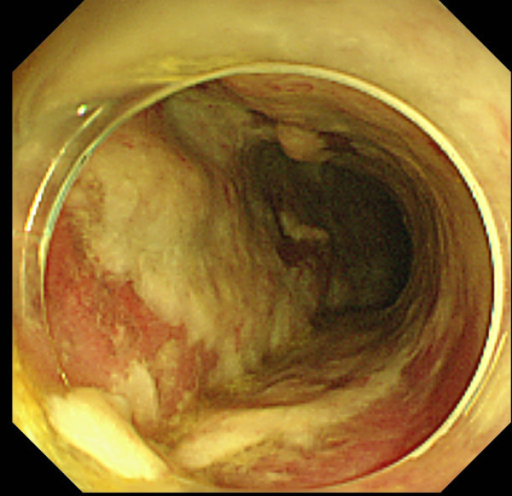 Note: In animal experiments, metronidazole has been shown to be mutagenic and carcinogenic, which is why this medication should not be used for longer than 10 days. If the course of treatment exceeds 10 days, it may lead to neuropathies and CNS disorders.

Anaerobes have evolved different mechanisms of resistance. Specific resistance genes (nim) confer resistance to metronidazole by encoding an alternative reductase that can convert a nitroimidazole to a nontoxic derivative.

Fosfomycin is a phosphonic acid derivative that irreversibly inhibits murein precursor synthesis. Because of its good soft tissue penetration and broad spectrum of activity, it is used as a reserve antibiotic in the treatment of osteomyelitis and soft tissue infections. Renal excretion occurs via glomerular filtration, and no tubular secretion occurs.

Fosfomycin should be used in combination with other bactericidal antibiotics to prevent the development of resistance. Common side effects of fosfomycin include nausea and vomiting. The infusion solution contains high concentrations of sodium and recrystallized succinic acid, which must be considered in the treatment of patients with hypernatremia and allergies. 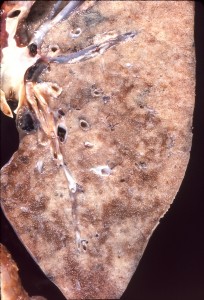 Cotrimoxazole is the combination of trimethoprim and a sulfonamide. It is used for the prophylaxis of AIDS-related infections like Pneumocystis jirovecii infections and in cancer patients.

Cotrimoxazole inhibits the production of tetrahydrofolic acid, which is needed for the synthesis of nucleic acids and amino acids. As trimethoprim and sulfonamides act synergistically, cotrimoxazole is bactericidal. Cotrimoxazole achieves adequate concentrations in CSF, bronchial secretions, and sputum.

Cotrimoxazole is eliminated by the kidneys. Cotrimoxazole is contraindicated in patients with renal impairment, in glucose-6-phosphate dehydrogenase deficient patients, and during pregnancy.

Chloramphenicol is a phenylalanine derivative that blocks bacterial protein biosynthesis. This bacteriostatic antibiotic inhibits the attachment of the tRNA to the ribosome and has a broad spectrum of activity. It targets a wide variety of Gram-positive and gram-negative bacteria (except Pseudomonas aeruginosa).

Chloramphenicol is characterized by good tissue penetration. It reaches high, effective concentrations in the CSF and aqueous humor. However, chloramphenicol also has undesirable, life-threatening adverse effects. The incidence of irreversible aplastic anemia and, more commonly, reversible bone marrow suppression is estimated to be 1 in 10,000.

Streptogramins are effective in the treatment of infections caused by Gram-positive bacteria, including methicillin-resistant Staphylococcus aureus (MRSA). Enterobacteriaceae are resistant to these antibiotics.

Oxazolidinones are also a new class of synthetic antibiotics and are not related to any other class of antibiotics. Hence, oxazolidinones do not exhibit cross-resistance or cross-allergies with other antimicrobial agents. Oxazolidinones inhibit protein biosynthesis; however, their exact mode of action is still unknown.

They act as bacteriostatic agents against Gram-positive bacteria, including MRSA, vancomycin-resistant enterococci, and penicillin-resistant pneumococci, but they do not target Gram-negative pathogens. Oxazolidinones are formulated for both oral and parenteral administration, both of which produce few adverse effects. It should be noted that oxazolidinones have a weak inhibitory effect on monoamine oxidase. Therefore, the use of oxazolidinone antibiotics may cause adverse interactions in patients treated with antidepressants. Particularly, symptoms like low blood pressure, an increase in temperature, and confusion should be monitored. 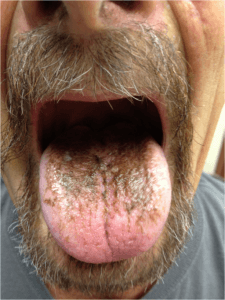 Image: Brownish-black discoloration of the posterior two-thirds of the tongue after 2 weeks of linezolid therapy. By: OpenI. License: CC BY 2.0

Linezolid is used for the treatment of infections such as pneumonia or skin and soft tissue infections caused by resistant Gram-positive bacteria.

Linezolid is not approved for and should not be used to treat children and is not recommended in patients with depression or malignant hypertension, as in pheochromocytoma or thyrotoxicosis. Possible side effects include vomiting, diarrhea, discoloration of the tongue, and pancytopenia, which is why the blood count should be monitored once per week.

Clindamycin is the best-known lincosamide antibiotic and the only one in clinical use. By affecting the peptidyl transferase reaction, clindamycin inhibits bacterial protein synthesis and has a bacteriostatic effect. It is highly effective against several types of bacteria such as staphylococci, streptococci (also pneumococci), and anaerobic bacteria belonging to the genera Bacteroides and Actinomyces, in addition to Propionibacterium and Clostridium perfringens. Other Clostridium spp. and all aerobic Gram-negative rods are resistant to clindamycin.

Clindamycin is readily absorbed from the gastrointestinal tract and reaches significant, clinically relevant concentrations in bone and other tissues. It undergoes metabolism in the liver, which is why clindamycin therapy has been linked to symptoms like jaundice and elevated hepatic enzyme levels. Clindamycin-based drugs contain high levels of benzyl alcohol so clindamycin should not be administered during pregnancy and the first months of life.

Clindamycin resistance is based on modifications of the ribosomal binding site and the inactivation of nucleotidyltransferases. In addition, the cell wall of Gram-negative bacteria is impermeable to clindamycin.

Clindamycin is associated with a high risk of antibiotic-associated enterocolitis (C. difficile colitis), so it is used exclusively in the treatment of serious anaerobic infection, such as abscesses, intra-abdominal infections, osteomyelitis, or dental and gynecological infections.

One thought on “Narrow-Spectrum and Broad-Spectrum Antibiotics”