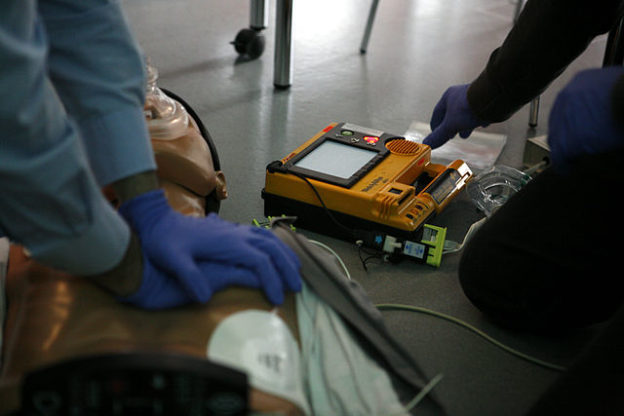 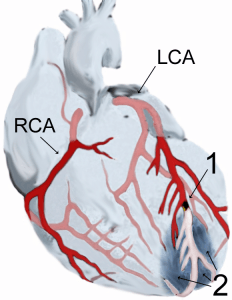 The term myocardial infarction refers to ischemia of myocardial tissue due to the complete obstruction or drastic constriction of the coronary artery. This is usually accompanied by an increase in cardiac enzymes, typical ECG changes, and pain symptoms, or a thrombus or wall motion abnormality that is detected by means of medical imaging.

The main cause of myocardial infarction is the development of atherosclerosis in the coronary arteries; hence, the name coronary heart disease. Coronary embolism is a rarer cause.

Distinctions based on the type of myocardial infarction 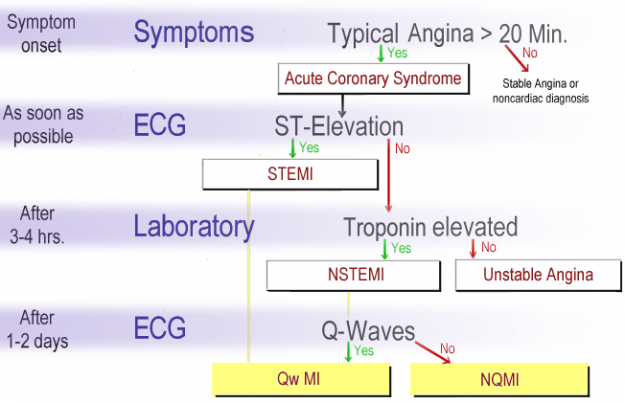 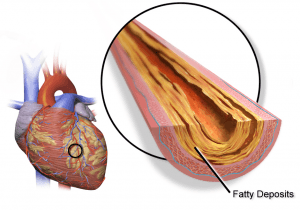 The rupture can be triggered by physical or psychological stress, drastic blood pressure fluctuations, or in the course of circadian rhythms that are accompanied by changes in coagulation activity (stronger coagulation early in the morning).

Typical symptoms include severe retrosternal pain, which usually radiates to the left arm (Note: right arm pain is also possible), neck, and upper jaw, and does not improve after nitroglycerin administration. These symptoms are observed in only about 40% of patients. 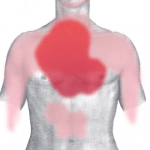 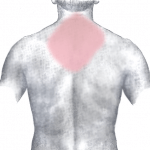 Painless (silent) infarctions especially affect diabetic patients due to neuropathy or old age. These painless infarctions are present in about 20% of all cases.

However, infarction pain can also be atypical, such as upper abdominal pain, feeling of faintness combined with fear and sweating, dyspnea, nausea, or vomiting. These atypical pain symptoms are frequently found in women, diabetics, or older people.

In the course of the disease, the typical retrosternal pain can be evaluated. A physical examination can reveal e.g. signs of cardiac decompensation or changes in blood pressure. Cardiac risk factors can also be identified in the process or be unveiled during the physical examination.

Noticeable sounds, especially in connection with complications, may be detected in the course of auscultation. A pericardial rub can be heard, which suggests underlying pericarditis. A systolic murmur occurs during ventricular septal perforation or mitral valve insufficiency. Pulmonary vascular congestion or lung edema can cause bilateral basal rales.

The classification of heart enzymes provides information on the presence and extent of myocardial damage. The determination of Troponin I or T (depending on the laboratory) is considered the gold standard. Troponin, as a cardiac marker, is specific to myocardial tissue.

Reinfarction after myocardial infarction cannot be diagnosed by means of troponin recording since the troponin concentration only returns to normal after about 1–2 weeks. In contrast, myoglobin is non-specific and also increases when damage to skeletal muscles occurs but normalizes after 1 day at most. CK-MB is specific to the infarction, but it only starts to rise 4 hours after the occurrence of ischemia. A CK-MB concentration of 6–20% of the total CK indicates myocardial damage.

LDH can serve as a long-term marker of myocardial damage. It starts to increase only after 6–12 hours, but reaches its maximum after 2–4 days and stays at an increased level for up to 2 weeks following the infarction. GOT, which is actually a marker for liver cells, also exists in the heart muscle and can also be used for diagnostics. In that case, GPT, which is specific to the liver, has to be determined as well in order to distinguish heart disease from liver damage. 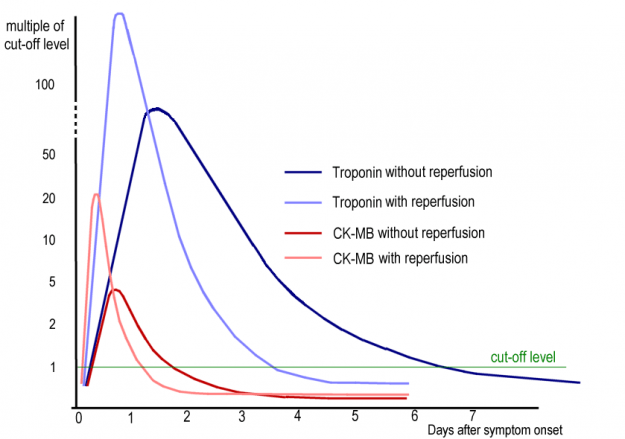 The following table provides an overview of the various parameters:

In the case of NSTEMI, the ST-segment may be temporarily depressed and may be accompanied by a negative pre-terminal T-wave. The ECG changes in NSTEMI are often atypical, which means that an infarction can only be ruled out through repeated assessments of heart enzyme levels. 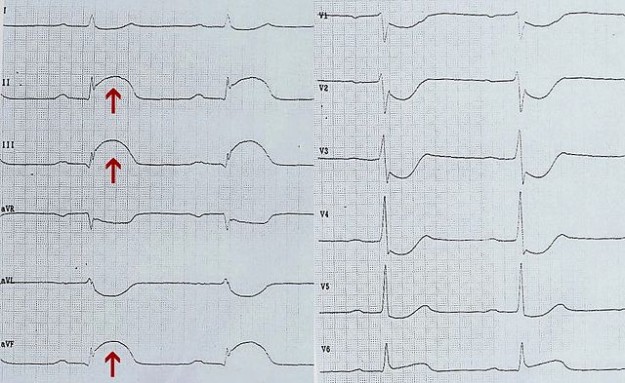 In the case of STEMI, the ECG shows typical changes, such as the monophasic ST-segment elevation, which transitions directly into the T-wave, with pathologically enlarged Q-spikes. Other ECG changes are typical depending on the stage of the infarction:

The ECG lead(s) in which changes are detected provide information regarding which coronary artery is possibly obstructed and where the infarction is located. In exams, students are often asked to explain how anterior myocardial infarction leads to ECG changes in leads V1-V6, aVL, and I. This frequently affects the proximal part of the anterior interventricular artery. Changes in leads V1 and V2, however, point to a posterior myocardial infarction, where the posterior descending artery is being affected frequently.

Echocardiography as another diagnostic tool helps to detect wall motion abnormalities, to determine the remaining function, and to exclude complications, such as cardiac valvular defects. Cardiac catheterization is considered the gold standard and should be performed as quickly as possible in the case of STEMI. MRI cardioangiography is another means of detecting wall motion abnormalities and determining the size of infarction scars.

The pathology of myocardial infarction can be traced to the insufficient perfusion of cardiac tissue. At a perfusion rate of less than 25% of the normal blood flow, the tissue is damaged irreversibly, and after 6–12 hours, damages in the form of yellowish focuses become visible with light microscopy.

Complete myocytolysis takes place, the cell nuclei starts to pale, and the cross striations get blurred. Granulation tissue with a hemorrhagic edge and numerous peripheral leukocytes develop a few days later. Only after 2 weeks does whitish scar tissue develop.

Symptoms similar to those of myocardial infarction

The typical pain symptoms can also point to unstable angina pectoris, with the exception that there is no increase in troponin. Particularly, when pain spreads to the upper abdomen, the symptoms can be mistaken for an acute abdomen. Another differential diagnosis is Takotsubo cardiomyopathy, which is often caused by emotional stress.

ECG changes can also be caused by other diseases. ST-elevation can also occur in pericarditis or left ventricular hypertrophy, while low Q-spikes can be noted in lung embolisms, Wolff-Parkinson-White syndrome, or hypertrophic cardiomyopathies.

Furthermore, all other causes of thoracic pain have to be distinguished from myocardial infarction, including lung embolism, aortic dissection, tension pneumothorax, and spontaneous rupture of the esophagus (Boerhaave-syndrome). Myocarditis, pericarditis, and musculoskeletal thoracic pain are also differentials of myocardial infarction and are possible exam answers on the subject.

Oxygen (4–8 L/min per nasal O2 tube) can be administered from the initial treatment until the diagnosis is confirmed. Additionally, it is recommended to elevate the upper body for relief (30°) in the case of dyspnea or heart insufficiency. Administering nitroglycerin (1 capsule or 2 puffs = 0.8 mg, 1–5 mg intravenously through a perfusor.

Note: nitroglycerin is contraindicated if systolic blood pressure is 90 mm Hg). PDE-5 inhibitors and morphine (3–5 mg intravenously every 5–10 minutes) can be co-administered when severe pain occurs.

Furthermore, all patients receive aspirin (initial dose 150–300 mg), heparin (UFH 70 IE/kg, KG or LMWH), and a P2Y12 inhibitor such as clopidogrel (initial dose 300 mg). Intramuscular injections should be avoided since they lead to a non-specific increase of CK-levels. The administration of beta-blockers, ACE-inhibitors, and AT1 receptor antagonists is also indicated unless there is a contraindication.

Cardiac catheterization is used for the diagnosis of NSTEMI and can be performed between 2 and 72 hours after the incident, depending on the risk factors in the patient. In the case of STEMI, the obstructed coronary vessel has to be revascularized as quickly as possible via PCI. Primary PCI is the therapy of choice and should be performed within 90 minutes.

Alternatively, a conservative therapy of fibrinolytics and thrombolytics for reperfusion can be administered. These drugs include streptokinase, alteplase, reteplase, and tenecteplase, all of which should accompany heparin therapy. Alternatively, fondaparinux or enoxaparin may be administered. It is crucial to ensure that no contraindications such as hemorrhages exist and that the STEMI is recent, in which case an acute PCI is not possible.

Note: Fibrinolytic treatment should not be administered in NSTEMI.

Subsequently, additional therapy is necessary to avoid coronary rethrombosis. Dual platelet inhibition is typically employed in this process, while aspirin is combined with ticagrelor, prasugrel, or clopidogrel. The inhibition of platelet aggregation using aspirin has to be continued throughout life, whereas, inhibition by means of P2Y12 inhibitors is only used for 12 months following the infarction.

Moreover, all patients should receive cholesterol-lowering agents such as statins. The intake of beta-blockers decreases the reinfarction risk as well as the risk of arrhythmia-related and sudden cardiac death.

The complications associated with myocardial infarction are extensive, and their severity depends on the degree of myocardial damage.

One can distinguish between early and late complications, with the transition between those phases lying at about 48 hours following the infarction. Early complications include cardiac arrhythmias that develop when an area of the myocardium is under-supplied. Ventricular fibrillation, which accounts for 80% of deaths due to myocardial infarction, frequently occurs within the first few four hours following the infarction. Premature ventricular contractions or atrial fibrillation can also occur.

Depending on what area is damaged, right or left heart failure and cardiogenic shock may occur, or damage in the papillary muscle may lead to an insufficiency of the atrioventricular valves. After ventricular fibrillation, congestive heart failure due to cardiac insufficiency is the second most frequent cause of death in patients with myocardial infarction.

Since 95% of the cases of acute coronary syndrome are manifestations of coronary heart disease, the disease is preventable. Thus, risk factors, especially the main risk factors, which are high cholesterol, arterial hypertension, diabetes mellitus, and nicotine abuse must first be addressed. Patients should be advised to adopt a healthy lifestyle by paying attention to nutrition and exercise. However, these approaches can be supported with medications.