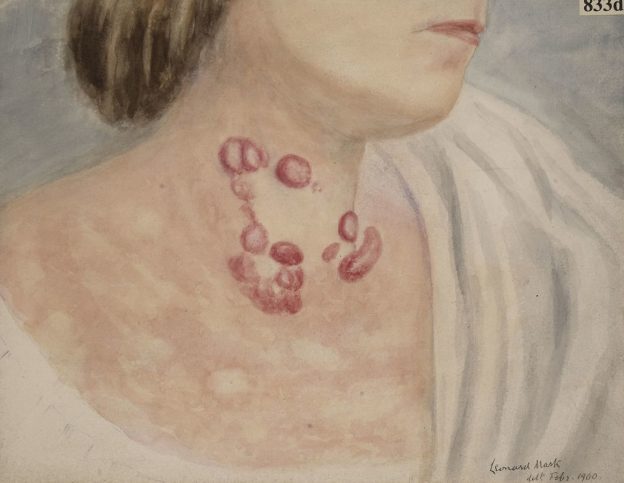 Image: Watercolour drawing of the neck of a woman suffering from mycosis fungoides. There is a diffuse patchy erythema over the neck and chest, with a group of round and oval, smooth, red elevations. By http://wellcomeimages. License: CC BY 4.0

Mycoses may be divided into the following types on the basis of the level of tissue invasion.

This infection is limited to the superficial layer of the skin and hair, e.g., tinea versicolor.

Cutaneous mycosis not only invades deeper into the epidermis of the skin but also involves the hair and nails of the body. The organisms causing this infection are called ‘dermatophytes’ and are often limited to the keratinized layer of skin, hair, and nails. The host immune system may be activated, causing local inflammatory changes. Examples include ringworm infection.

Subcutaneous mycosis occurs as a result of piercing trauma to the skin, thus causing the organism to invade the skin, subcutaneous fat, fascia, and muscles. Such infections require debridement and treatment with antifungal drugs.

Systemic mycosis can be due to either primary pathogens or opportunistic organisms that already reside inside the body. In the former case, they are usually inhaled and spread to the local tissues and lymphatic stream, causing a systemic infection. Opportunistic infections mostly occur in immunocompromised individuals. Examples of the latter include candidiasis, aspergillosis, and cryptococcosis. 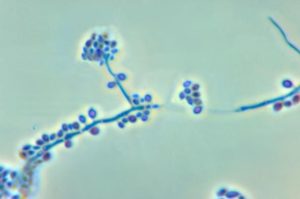 Image: This photomicrograph reveals the conidiophores and conidia of the fungus Sporothrix schenckii. Sporotrichosis, caused by the etiologic pathogen S. schenckii, is a skin infection involving the subcutaneous layer. It manifests itself by the formation of large ulcerations; however, the disease can become systemically disseminated. By Centers for Disease Control and Prevention. License: Public domain.

Sporotrichosis, also known as ‘Rose Gardener’s disease,’ is a fungal infection caused by the species Sporothrix schenckii, which is shown in the figure. The most common form of sporotrichosis is cutaneous infection. Pulmonary and disseminated infections, although rare, have also been reported.

Sporotrichosis occurs worldwide. It is endemic in China. Epidemics have been reported in South Africa, Australia, and Brazil. In Peru, the incidence is 1 case per 1,000 people. The prognosis of the disease is very good.

Morbidity is associated with pulmonary sporotrichosis, specifically in patients with chronic obstructive pulmonary disease (COPD) or osteomyelitis, which develops as a result of dissemination. The mortality rate is significant in immunocompromised patients.

Sporotrichosis is more common in women than in men and is most often seen in adults.

The common mode of transmission of sporotrichosis is through skin inoculation. The dimorphic organism is found in the soil and enters the skin via cuts, wounds, or animal bites or scratches.

The initial reddish, necrotic papule of cutaneous sporotrichosis appears after 1–10 weeks of skin injury. A granuloma is formed by the neutrophils, histiocytes, and giant cells, along with local necrotic tissue. This suppurative area is then surrounded by the lymphocytes and the plasma cells.

The fungal infection spreads via the lymphatic stream, by direct invasion of local tissues, and rarely through the bloodstream. Hematogenous dissemination, if it occurs, causes severe visceral infections, including meningitis. The common extracutaneous sites of infection are the bones, joints, tendons, and bursae.

A rare form of sporotrichosis occurs after inhalation of the organism, which causes pneumonia, specifically in patients with COPD or alcoholism. Such infections are clinically and radiographically indistinguishable from tuberculosis or histoplasmosis. It may affect the sinuses, the kidneys, the subglottic region, and the retinas.

The clinical presentation of sporotrichosis depends on the immune status of the host and the site of infection. Patients usually present with a primary lesion in the distal extremities. A small, red, painless nodule may appear in 1–12 weeks after contact with the fungus, usually appearing in the arm, the finger, and the hand. Initially, it is a small nodule that enlarges and becomes pustular and later ulcerates. It is very slow to heal. The lesion is mildly painful, but there are no signs of systemic illness, such as fever.

Later, new lesions begin to appear along the line of the lymphatic tracts of the body. The fixed cutaneous lesions of sporotrichosis should be considered if they fail to heal either spontaneously or with antibiotic treatment. Hypersensitivity reactions such as erythema nodosum or erythema multiforme may also occur.

The clinical features of pulmonary sporotrichosis are usually nonspecific and only give clues of the underlying respiratory pathology. Symptoms include cough, shortness of breath, chest pain, and fever. Disseminated infection is common in immunocompromised individuals. In such cases, the signs and symptoms depend on the organ involved.

Sporotrichosis needs to be differentiated from other bacterial and fungal infections of the lungs and joints. The differential diagnosis includes the following: 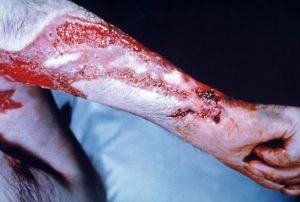 The diagnosis of sporotrichosis can be done by culturing the organisms from specimens such as pus, skin biopsies, cerebrospinal fluid (CSF), and synovial fluid. Periodic acid–Schiff, Gomori methenamine silver, or immunohistochemical staining is often used to visualize the organisms.

The ratio of CSF to serum antibody against sporotrichosis suggests meningeal involvement. Similarly, X-ray and computed tomography (CT) scans of the chest reveal respiratory pathology; however, they do not provide a definitive diagnosis.

There is no vaccine for the prevention of sporotrichosis. Sporotrichosis can be prevented with the use of gloves and long sleeves during outdoor activities such as gardening. Ideally, animals should also be handled while wearing gloves to avoid zoonotic transmission. Animals that have skin lesions can easily transmit the disease to humans. Last but not least, patient education is required regarding the mode of transmission and the adverse effects of antifungal therapy.