The Muscles of Mastication and of the Tongue

Image: “Muscles That Move the Lower Jaw” by Phil Schatz. License: CC BY 4.0 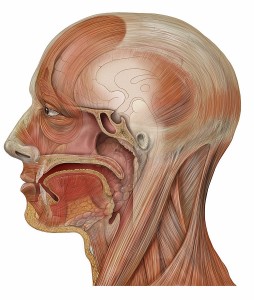 Muscles of the human tongue

The tongue muscles consist of

The tissue pressure that arises during contraction of the intrinsic tongue muscles works in an antagonistic manner similar to a water cushion.

The intrinsic tongue muscles consist of the following muscles:

It can be difficult for some patients to perform certain movements ‘on command’. Various movements of the tongue can be observed during the examination of the patient.

Note: If there is a lesion of the hypoglossal nerve, the tip of the tongue deviates to the diseased side.

The task of extrinsic tongue muscles is the movement of the whole tongue in the oral cavity. Depending on the location of the muscle, the tongue can be moved forward and backward and can also be elevated and depressed.

There are 5 extrinsic tongue muscles:

Like the intrinsic tongue muscles, the genioglossus, hyoglossus, chondroglossus, and styloglossus muscles are innervated by the hypoglossal nerve. The palatoglossus muscle is however supplied by the glossopharyngeal nerve (IX) and vagus nerve.

Muscles of the lingual bone

The lingual bone (Latin: os hyoideum, hyoid bone) serves as a support for the base of the tongue and is a hoof-shaped flat bone-brace. It is possible to feel it in the kink between the neck and the floor of the mouth. The hyoid bone can easily be moved back and forth since it rises and lowers every time a person swallows.

The hyoid bone is very mobile since it does not have any direct contact with other bones. It inserts between the hyoid muscles like a bony intermediate tendon and is, additionally, fixed to the skull by ligaments. 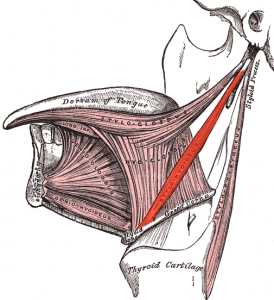 The following muscles are part of the suprahyoid muscles:

The floor of the mouth extends – in the form of a muscle plate – from the hyoid bone to the inner surface of the mandible. The left and right floor of mouth muscles (mylohyoid) are united via an intermediate tendon.

Parallel to the posterior belly, the stylohyoid also runs from the styloid process at the base of the skull to the hyoid bone.

Lying next to the median plane and running from front to back, the right and left geniohyoid muscles lie close together at the superior surface of the mouth floor. This is also referred to as the chin-hyoid bone muscle. 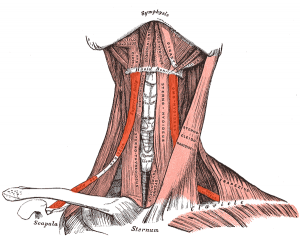 The following muscles are assigned to the infrahyoid group of muscles:

From the hyoid bone to the posterior surface of the manubrium, the infrahyoid muscles extend in the form of a straight strand on both sides of the midline.

Each of the other 3 muscles consists of 3 plates of strap-shaped muscles. The sternohyoid is the longest of them. Together, the sternothyroid and thyrohyoid muscles form a consecutive muscle loop, which is as long as the sternohyoid.

Functions of the Hyoid Muscles

During swallowing, the suprahyoid muscles pull the larynx, which is connected to the hyoid bone, against the posterior end of the tongue until the flexible epiglottis abuts, bends, and lies protectively over the entrance to the larynx. This is required to avoid anything being taken into the trachea. The larynx and the hyoid bone are then led back to their original position by the infrahyoid muscles.

As a connecting, free bone, the hyoid bone is inserted into a muscular loop, which consists of the suprahyoid and infrahyoid muscles. They form a synergistic muscular loop so that the hyoid bone can be fixed at the fixed point by means of counter-resistance. This is implemented when the mouth is opened against resistance.

As the hyoid muscles keep the hyoid bone in position, the originating tongue muscles have a fixed point for the purpose of tongue movement.

During flexion of the cervical spine and the head, the hyoid muscles may contribute. If needed, the muscular loop of the tongue muscles can be used as respiratory muscles, which pull the sternum cranially.

Muscles of Mastication and Temperomandibular Joint

The masseter muscle is located in the posterior parts of the cheek and it covers the ascending ramus of the mandible as well as the mandibular angle from the outer surface. Along with the temporal muscle and the medial and lateral pterygoid muscles, it is a member of the chewing muscles that are grouped together not only functionally, but also in evolutionary terms. They are innervated by the mandibular branch of the trigeminal nerve (V). 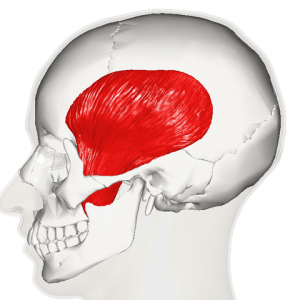 Image: Location of the temporal muscle. By: Was a bee. License: CC BY-SA 2.1 JP

It is often difficult to discuss the temporal muscle without considering their main synergists—the masseter and medial pterygoid.

The temporal muscle expands across the major part of the lateral wall of the skull. Its posterior and superior borders are marked by the inferior temporal line. The muscle reaches its greatest thickness behind the zygomatic bone. In a horizontal section, the muscle would look like a triangle extending over the cheekbone. At the front, a wide base would be seen and at the back, a long tip which peters out would be seen.

The muscle is shaped like a fan in which the anterior and deep fibers run almost vertically, or, rather, medially from the front in lateral and posterior directions. The posterior fibers run in a horizontal direction. The muscle fibers bunch into a tendon during their course, and this tendon inserts at the coronoid process of the mandible.

Functions of the Temporal Muscle

The temporal muscle facilitates powerful biting and it can simultaneously also pull the mandible backward by means of its horizontal fibers.

Depression of the mandible due to gravity is inhibited by its continuous tone.

Note: The temporal muscle is often involved in the development of a tension headache or Costen’s syndrome. 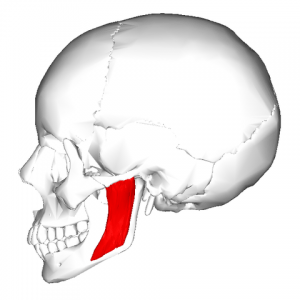 Image: Location of the masseter muscle. By: Was a bee. License: CC BY-SA 2.1 JP

The shape of the masseter is often compared to a rectangle with a rounded bottom corner.

Functions of the masseter muscle

The masseter facilitates the powerful closing of the jaw. It can also move the mandible forward by means of its superficial part and backward with its deep part.

The medial pterygoid assists during this movement.

Note: In case of paralysis of the masseter, the function of this muscle can be performed by the medial pterygoid and temporal muscles.

Spastic reaction pattern can result from a skull/brain trauma, with another consequence being that it becomes more difficult to open the mouth; it also leads to severe teeth grinding (bruxism). 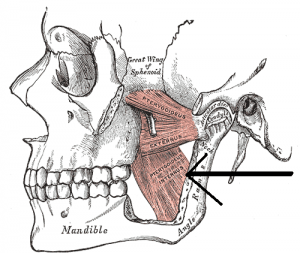 The medial pterygoid lies at the medial side of the mandible in the form of a mirror image of the masseter.

It is significantly narrower than the masseter and is shaped like a narrow rectangle.

Function of the medial pterygoid

The medial pterygoid closes the jaw in a powerful manner. It is able to pull the mandible slightly forwards and sideways.

The lateral pterygoid expands at the infratemporal fossa. The course of the horizontally running fibers significantly differs from the course of the other jaw adductors.

Functions of the lateral pterygoid muscle

The lateral pterygoid is an important opener of the jaw. Extending from the front, it inserts at the mandible and can pull the mandible itself and the disc of the temporomandibular joint forwards.

In summary, one should know the following functions of the muscles of mastication:
Masseter:

The temporomandibular joint is one of the ‘connected flexible’ bone joints and it represents a closed sequence of joints. 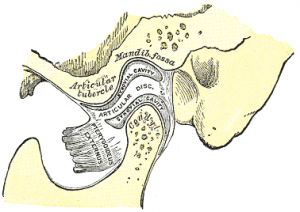 Anteriorly, the mandibular fossa is bordered and stiffened by the articular tubercle and, posteriorly, by the retroarticular process, which is small in humans. It is only covered by fibrocartilage at the front.

The shape of the condyle of the mandible fits the articular fossa and has an ellipsoid form, which is somewhat broader laterally than medially. Furthermore, its upper anterior articular surface is more inclined to the outside and is covered with fibrocartilage. The dorsal articular surface descends to the posterior in a flattened manner and it is only covered by dense connective tissue.

The articular disc separates the head and socket from each other so that 2 completely separate articular cavities exist. The disc is a trapezoid body, which is thickened at both its longitudinal sides and whose middle narrow zone is very thin. In the inferior articular cavity, the articular head of the jaw around a frontal or vertical axis (rotation), while a sliding movement occurs between the disc and the mandibular fossa in the superior articular cavity. 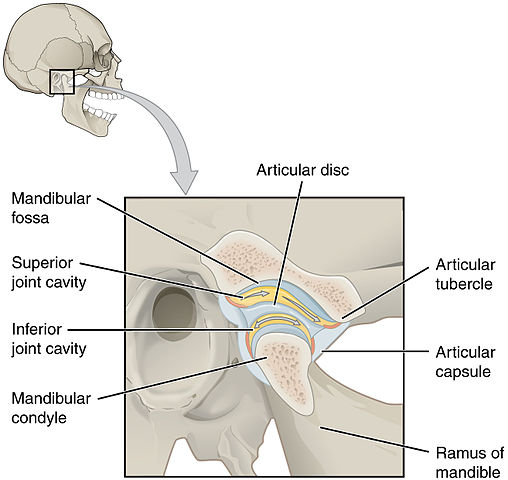 Movement of the temporomandibular joint

Due to the type of movement that is characteristic of the temporomandibular joint, it is referred to as a mixed joint, with 4 degrees of movement.

The main movements are classified as follows:

Note: Lockjaw occurs if the head of the mandibular joint moves in front of the articular tubercle when the mouth is wide open, such that it is caught in this position so that the mouth is no longer able to close.
Learn. Apply. Retain.
Your path to achieve medical excellence.
Study for medical school and boards with Lecturio.
Rate this article