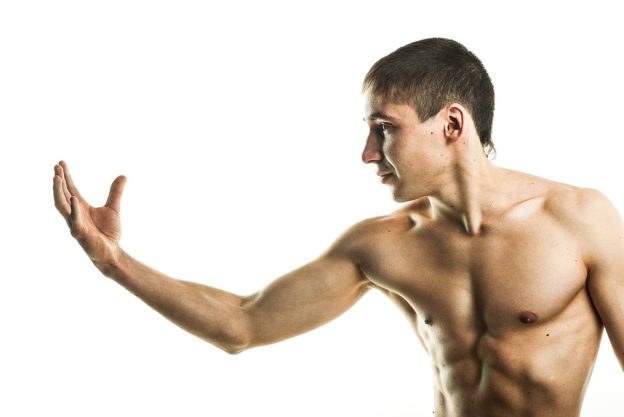 Muscles and their cells are specialized according to their particular functions. Thus, there are 3 types of muscle: 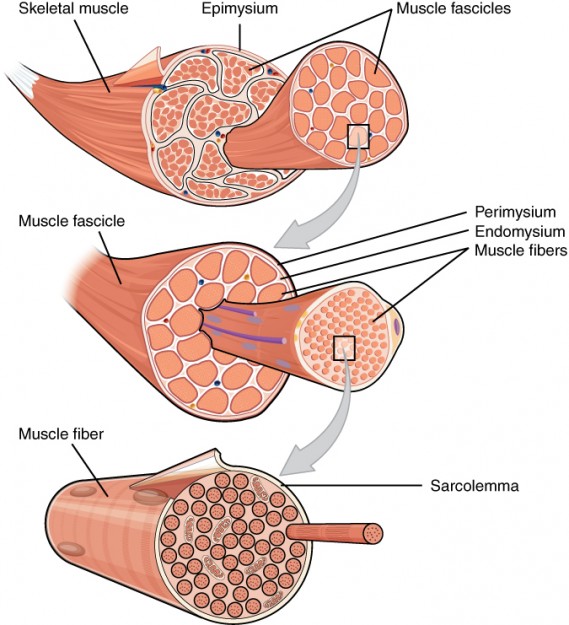 Teleokinetic and ereismatic biomotor functions in humans are facilitated by approx. 400 skeletal muscles, which make up about 40% of the body mass in an average person. This muscle type is innervated by the somatic nervous system and is, therefore, normally voluntarily contractible. Another important feature is that the skeletal muscles can rapidly exert high force but are easily fatigued.

The hierarchical structure of skeletal muscles is illustrated as:

Upon closer inspection, a regular structure can be detected inside a myofibril. It consists of many lined-up sarcomeres, which describe the section between 2 z-discs. 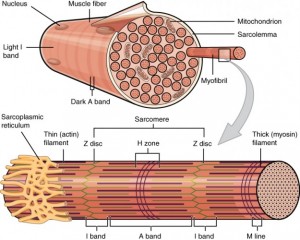 The type of muscle fiber determines how much power a muscle can exert and how enduring it is. Muscle fibers can be classified by functional criteria or by the content of myoglobin.

Considering the myoglobin content, muscles can be classified as:

Based on functional criteria, the classification of muscle fibers is as follows:

Skeletal muscles can also be classified into:

These are the slow-twitch fibers or slowly contracting fibers. They are also known as red and slow fibers.

These are fast contracting fibers that comprise 2 forms with different resistances to fatigue.

They are red fast oxidative fibers with medium resistance to fatigue.

These are the white fibers or fast glycolytic fibers. They have the least resistance to fatigue.

Smooth muscles, which are located in all inner organs, are innervated through the autonomic nervous system and are, therefore, not voluntarily contractible. They regulate blood pressure inside the vessels, cyclic changes from the contraction and relaxation of the gastrointestinal tract, and other internal processes.

Smooth muscle cells are much smaller than skeletal muscle cells. The contractile elements are actin and myosin, which are organized in a net-like structure, forming a smooth surface as can be observed through an optical microscope.

The dense bodies and dense areas correspond to the z-plates of skeletal muscles and contain the actin filaments connected to the sarcolemma (cell membrane of the muscle cell).

The power of the myosin filaments is transferred to the sarcolemma by virtue of the intermediate filaments (for example, desmin, vimentin, and filamin) being connected with the dense bodies and dense areas. The endoplasmic reticulum serves as a Ca2+ store, as in the skeletal musculature. However, in this case, the Ca2+-binding protein is calmodulin instead of troponin C.

Cardiac musculature contains elements of both smooth and skeletal muscles but is differentiated by its special muscle tissue. Cardiac muscle tissue must be extremely enduring – an entire lifetime – at low-power exertion.

The following are important histological features of cardiac musculature:

Due to the existence of different types of musculature, there is a variety of different contraction processes, which are more or less similar, depending on the type. This is why the following section individually examines these processes.

In order to understand the contraction of striated musculature – the sliding filament theory – one must be familiar with the following terminology:

Sliding filament theory: Describes the interaction of the actin filaments with the myosin filaments, which leads to mechanical muscle contraction. In this mechanism, there is no change in the length of myofilaments during a contraction but only a shortening of the sarcomeres through a sliding-by of the myofilaments. This causes the shortening of the muscle as a whole. 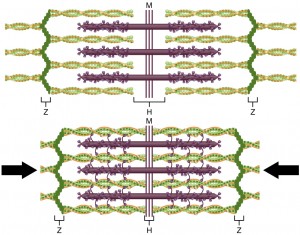 The sliding process is based on the so-called cross-bridge cycle, which functions as follows:

Muscle contraction ends by lowering the intracellular Ca2+ level due to the cessation of the action potential.

Electromechanical observation of the contraction process of skeletal muscles

Note: A voluntarily triggered contraction stems from the cerebral cortex whose neurite transmits the electrical impulse to the anterior horn of the spinal cord.

Depending on which kind of physical strain (intensity or duration) a body is exposed to, it will utilize different sources of energy to meet the demand:

Contraction forms of the skeletal musculature

Development and regulation of muscle power during skeletal muscle contraction

The amount of force a muscle can exert at the end, and the detailed gradations and its application, depends on the following:

Work in the physical sense is accomplished when a distance is crossed. Muscle work can be computed by considering the product of muscle shortening and load. This means that mechanically speaking, no work is performed during an isometric contraction. The invested energy is simply transformed into heat.

The capability of the human body to adapt to physical exertion or inexertion is extraordinary. For instance, in a phase of inactivity (perhaps due to immobilization) atrophic changes can be observed within a short period of time. Equally, the body can adapt muscularly to higher exertion. The mechanisms of muscle performance increase depending on its type are as follows:

Muscle elasticity is facilitated by the collagen layer of the sarcolemma and connective tissue between the muscle fibers. When a resting muscle is engaged, its tension will rise. That means, the longer a muscle is in a state of strain, the more force has to be exerted. This interaction is called the length-tension curve.

Clinical feature: In the case of excessive strain, muscle fibers are destroyed, which is colloquially known as a muscle tear.

Different contraction behaviors determine the classification into single- and multi-unit smooth muscles. The former is a muscle unit, which is coupled by gap junctions and, therefore, works as one coherent functional unit, i.e., the muscles contract together. This muscle type is found predominantly along organ walls and blood vessels.

For multi-unit smooth muscles, the muscle cells are capable of contracting independently of one another due to the predominantly autonomic innervation. Since there are relatively few gap junctions, the electric coupling occurs through a basal membrane-like layer. Furthermore, the neurotransmitters are distributed by so-called varicosities. This type of smooth muscle can be found, among others, in the ciliary muscle of the iris and the arrector pili muscle.

The specialized cardiac muscle cells can be divided into the electrical impulse formation system and conduction system. The system has the following components:

From stimulation to cardiac muscle contraction

The stimulation stemming from the sinus node, i.e., the electrical impulse formation system, is transmitted from the syncytium to the AV node. This serves simultaneously as a ‘backup electrical impulse formation system’. From there, the impulse is passed on from the bundle of His to the bundle branches. Their function is to rapidly spread the impulse to the apex of the heart and papillary muscles of the heart valves.

Note: Stimulation of both atria → conduction to papillary muscles → impulse transmission to the Purkinje fibers (final branch of the impulse conduction system); in this phase, the atria are already relaxed.

Since the actual process of contraction occurs in the working myocardium, we will discuss the process of development and cessation of an action potential in this section. First, it is important to note that localized processes of the action potential are similar to others as they pass through partially similar stages.

The action potential of the myocardium lasts about 300–450 ms, depending on the exact location of measurement and heart frequency.

Bourne, G. H. (1973). The structure and function of muscle: Physiology and biochemistry.