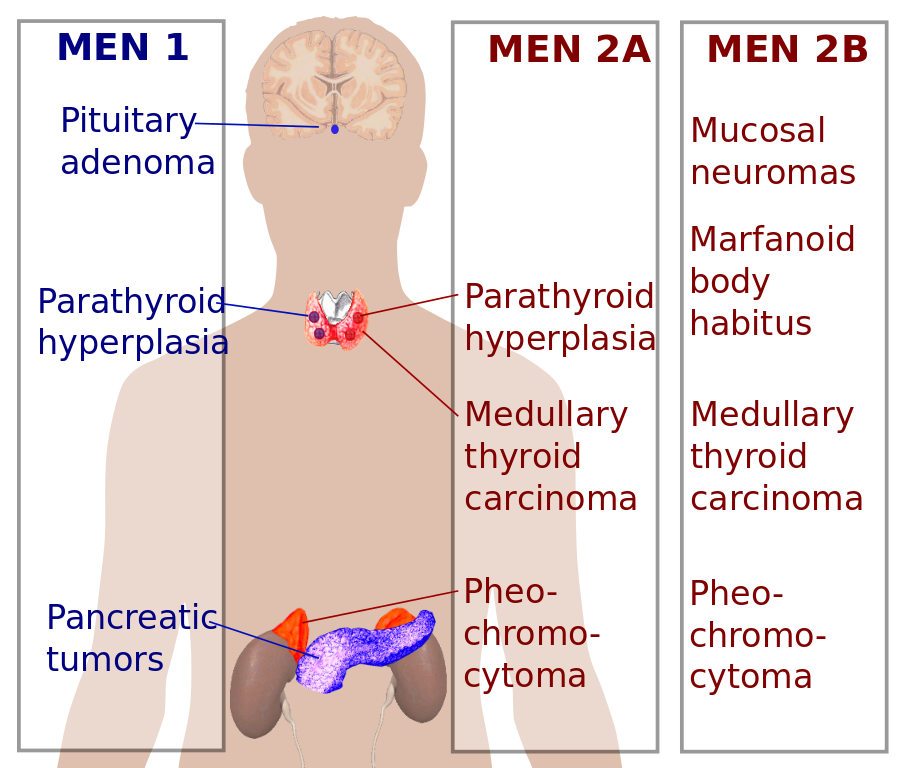 MEN-1 syndrome belongs to the multiple endocrine syndromes and is inherited in an autosomal dominant manner.

The cause of MEN-1 syndrome is a mutation of the menin gene. This gene is located on the long arm of chromosome 11 (11q13).

Note: MEN-1 syndrome is caused by a mutation of the menin gene.

The signature disease of MEN-1 syndrome is primary hyperparathyroidism (95% of cases). Here, an increased level of parathormone occurs due to parathyroid hyperfunction.

Note: The signature disease of MEN-1 syndrome is primary hyperparathyroidism. 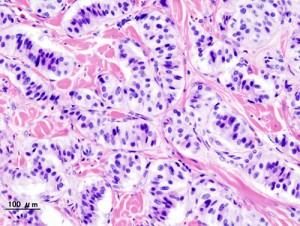 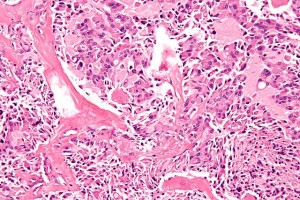 FMTC-only is a special form of MEN-2 syndrome since only medullary thyroid carcinomas appear. That is why it is also called a non-MEN syndrome because no multiple endocrine tumors are present.

The etiology of the 3 subgroups of MEN-2 syndrome is identical. All 3 are caused by a mutation of the Ret-proto-oncogene that codes for a transmembranous tyrosine kinase. The locus of the mutation is on the long arm of chromosome 10 (10q11.2).

Sipple syndrome, comprising 70% of MEN-2 cases, is notably more common than Gorlin syndrome (about 10% of all cases).

Diseases of MEN-2a syndrome
Phaeochromocytoma (approx. 50% of cases) and primary hyperparathyroidism (20% of cases) occur as a part of Sipple syndrome.

Note: Primary hyperparathyroidism can be part of MEN-1 syndrome and MEN-2a syndrome.

Gorlin syndrome is the least often occurring subgroup of MEN-2 syndrome, accounting for 10% of the cases. In about 60% of the cases, Gorlin syndrome evolves as part of a new mutation, which means that it is not inherited in an autosomal dominant fashion. These cases are called sporadic cases.

Note: In contrast, primary hyperparathyroidism does not occur in Gorlin syndrome.

Tumors of MEN-2b syndrome
Similar to Sipple syndrome, medullary thyroid carcinoma is also the signature disease of Gorlin syndrome (about 100% of the cases).

As mentioned above, an FMTC-only syndrome is a special form as only medullary thyroid carcinomas occur.

Note: Always think of a MEN-2 syndrome as comprising familial medullary thyroid carcinomas. With a molecular genetic diagnosis, ‘unaffected’ family members can also be tested for the mutation so a prophylactic thyroidectomy can be considered.
Learn. Apply. Retain.
Your path to achieve medical excellence.
Study for medical school and boards with Lecturio.
References