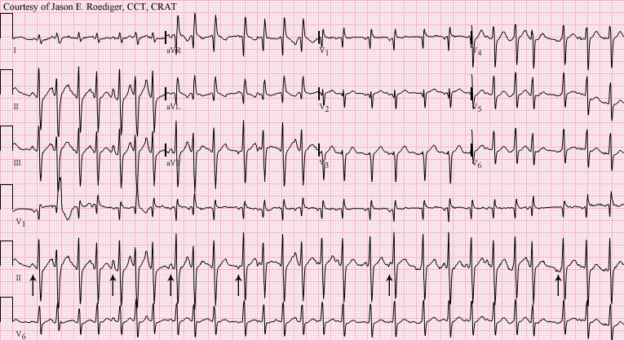 The heart consists of four chambers. The upper two chambers of the heart represent right and left atrium; the lower two chambers represent the right and left ventricle. The electrical impulses normally arise from the sinoatrial node (termed: sinus node), which acts as a cardiac pacemaker which adjusts the rate at which the heartbeats. As the electrical signal passes from the SA node through the walls of the atria, it causes their contraction, the signal slows down allowing the atria to contract before the ventricles. This delay is demonstrated as the PR interval in the ECG.

The disease is a consequence of an ectopic abnormal depolarization focus (outside the sinoatrial node), which depolarizes independently and regularly or by a triggered activity. It can be secondary to advanced heart disease, severe lung disease, or intoxication by glycosides, beta-adrenergic, theophylline, or certain electrolyte disturbances (hypokalemia).

The location of the ectopic focus can be at the right or left atrium. In the first case, it is most often near the sinoatrial node at a structure called “crista terminalis”. On the left, it is located most commonly near the site of the pulmonary vein. The appearance of the electrocardiogram can help locate the source of the arrhythmia with good reliability.

Causes of the multifocal atrial tachycardia

The risk of multifocal atrial tachycardia is also increased in the case of:

Many affected people might be asymptomatic, but if symptoms occur, they manifest sporadically. The most common symptoms of multifocal atrial tachycardia is a rapid heartbeat and fainting.

A rapid heartbeat can occur during activities or during rest and is usually associated with tightness of the chest, dyspnea, dizziness, and light-headedness.

In the case of multifocal atrial tachycardia, it is important to be aware of the possibilities of fainting resulting from prolonged breathlessness. The severity of these symptoms varies considerably by age and the patient’s general health. They tend to be more severe in people whose heart rate is higher.

Multifocal atrial tachycardia in infants can cause wheezy chest and weight loss.

Multifocal atrial tachycardia can be suspected if the heart rate ranges between 100 and 250 beats/minute, with a blood pressure located in the low average with signs related to poor circulation. The following investigations can be done:

According to the ECG, there are two forms of atrial tachycardia:

1. Atrial tachycardia with a block:

It is characterized by the presence of at least 3 P-waves of different morphologies that have a frequency of more than 100/min, with varying PR intervals which lead to ventricular complexes (QRS) in an irregular but the fine frequency (except functional or organic block already existing).

Some indexes enable to suspect certain locations of the ectopic focus. This applies mainly to its “normal” atrial. For example, positive atrial activity in the V1 derivation is strongly suggestive of a left atrial focus. The doctor may also recommend monitoring the heart in order to record heart rate. This monitoring can be achieved through several methods:

Treatment of the multifocal atrial tachycardia

The first step in the management of multifocal atrial tachycardia is to treat the underlying cause, which may include hypoxia (oxygen deficiency), theophylline toxicity, and congestive heart failure. Treatments eligible for increasing the oxygen levels in the blood can be administered. If there is a theophylline toxicity problem, use of medication will be stopped. Electrolytes, such as Magnesium & Potassium may be administered to correct any metabolic abnormalities. Certain medications may also be prescribed to treat the condition such as beta-blockers or calcium channel blockers.

People with uncontrollable multifocal atrial tachycardia may be treated with atrioventricular ablation of the tissues that send signals of contraction and implantation of a permanent pacemaker. No treatment is necessary for an asymptomatic infant with a relatively normal ventricular rate and normal heart function. Cardioversion is ineffective since the arrhythmia is frequently recurrent. A patient with a poor ventricular function may require treatment with amiodarone.

The natural course of the multifocal atrial tachycardia is a spontaneous resolution within weeks or months. For cases requiring medical treatment, it can be terminated after that period. Long-term prognosis is good, with no late recurrence.