A phenotype is an individual feature or characteristic that can be weighed, recorded, or noticed, such as hair or eye color.

A genotype is a part of the feature, or phenotype, that is found in the progeny. It is formed by alleles or genes on different loci. It is impossible to record/measure or notice a genotype.

Polygenic inheritance is a mode of inheriting phenotypic traits, occurring when several gene pairs on different loci have an additive effect, leading to an individual’s particular trait or characteristic, such as fingertip ridges.

Multifactorial inheritance is another mode of inheritance. It is polygenic, but it also occurs due to the influence of other genes and the individual’s ante and post-natal environments, such as height and skin color. 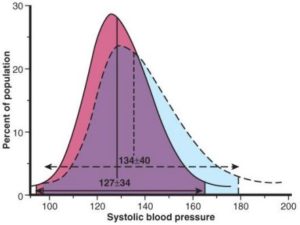 Quantitative traits occur as a result of continuous variation, which is the sum total of small effects caused by a gene. Usually, several genes, or a group of genes, control quantitative traits. A polygenic trait refers to multiple genes’ influencing a trait, such as height, human intelligence, and skin color. Height,  considered the best example of a quantitative trait, occurs in a range of values.

Qualitative traits are “yes or no traits” and can be classified into categories, which may not be in any particular order. This type of trait has a monogenetic inheritance pattern. The trait is only influenced by a single gene, and the environment does not affect the development of this trait. 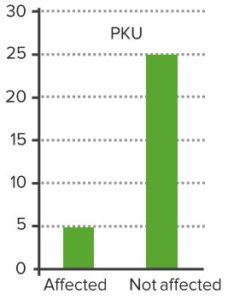 Inherited disorders are caused by a single gene mutation, such as ABO blood groups. With a few rare exceptions, most humans have one of the following four categories of blood types: A, B, AB, or O. Since the ABO blood group can be classified neatly into any of the four categories, it is considered a good example of a qualitative trait.

The risk of qualitative traits can be assessed using familial aggregation studies, such as relative risk ratios and case-control studies.

If an allele increases the chance of developing a disease, then one would expect the affected individual to have a greater-than-expected number of affected relatives.

(Λr) = 1 means there is little or no genetic impact.

(Λr) > 1 means there is a possible genetic predisposition.

Case-control studies are another risk calculation method. The genetic contribution is evaluated by comparing an affected individual to an unrelated control, such as a spouse who has shared the same environment.

The risk for quantitative traits can be assessed using correlation and heritability studies.

Heritability studies (H2): Measures the extent of variation in a phenotypic trait attributable to a genetic variation (not environmental) among individuals of a population.

H2 = 1 (heritability equals one,  meaning all variations are attributable to genetics)

H2 = 0 (none of the heritability is attributable to genetics) 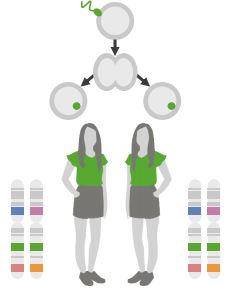 Fraternal or dizygotic twins share approximately 50% of their genetic information, depending on whether they inherited maternal or paternal traits.

Multifactorial gene disorders include genetic and environmental factors, which lead to small variations in the inherited genes. There is a different “threshold” of expression so that one gender is more adversely affected than the other. For example, congenital hip dysplasia is more common among females than males.

The probability of a multifactorial trait occurring in a family depends upon how close the relationship is between the family member with the trait and the rest of the family. For example, the incidence is higher if a sibling has the trait, as opposed to a first cousin since family members share a specific percentage of the genes based on the relationship.

Multifactorial disorders without a clear genetic component are, for example, congenital heart disorders (ventricular septal defect, patent ductus arteriosus, atrial septal defect, and aortic stenosis), neuropsychiatric disorders, and coronary artery disease. Although the exact genes responsible for the disorders remain unknown, genome studies are likely to reveal them in the near future.

The high relative risk ratio (lambda value) in the above table indicates a probable genetic component.

Schizophrenia: This is a neuropsychiatric disorder, affecting approximately 1% of the population, with a concordance value of 40 – 60% in monozygotic twins and 10 – 16% in dizygotic twins. The prevalence suggests there is a strong genetic component to the disorder.

Coronary artery disease (CAD): Concordance rates in monozygotic twin studies indicate a strong genetic component in CAD, although non-genetic and environmental components (diet, physical activities, and smoking) can influence the development of this condition, too.

Neural tube defects (NTD): The incidence of NTDs, such as spina bifida and anencephaly, are approximately 1 to 2 cases per 1,000 live births. Females are more likely to be affected than males. NTDs occur because of genes inherited from both parents combined with environmental factors, such as uncontrolled maternal diabetes, anti-epileptic medications prescribed to the mother, etc.

A couple who have a child with an NTD has a 3 – 5% probability of having another child with the same disorder, although the type of NTD may be different. For example, the first child may have anencephaly, while the second may have spina bifida.

Congenital hip dysplasia (CHD): As mentioned earlier, this is more common among females than males. Maternal hormones are the environmental factor contributing to CHD development. A couple who have a child with CHD have a 6% probability of having another child with CHD.

Hirschsprung disease: This is a developmental abnormality associated with an absence of enteric ganglia, leading to symptoms of constipation and intestinal obstruction. Causes of this condition include RET gene mutation as well as mutations in the non-coding regulatory regions near the RET locus.

Type I diabetes: It is now known to be an autoimmune disorder, with complex inheritance, associated with Major Histocompatibility Complex (MHC) genes on chromosome 6. Twin studies have reported a 40% concordance rate among monozygotic twins.

Alzheimer’s disease: With increasing lifespans, the incidence of this condition is currently reported to be 1 – 2% of the elderly. There are several forms of Alzheimer’s disease. Three autosomal dominant forms result in the late onset of Alzheimer’s (>60 years of age). Twin studies indicate concordance values of 50% in monozygotic twins. Genetic studies have found that individuals with two copies of the E 4 allele for Apolipoprotein E have an early-onset form of Alzheimer’s disease.

Polygenic and multifactorial inheritance via bogari.net

Complex and Multifactorial Inheritance via carolguze.com

The Difference Between Qualitative & Quantitative Traits in Genetics via education.seattlepi.com